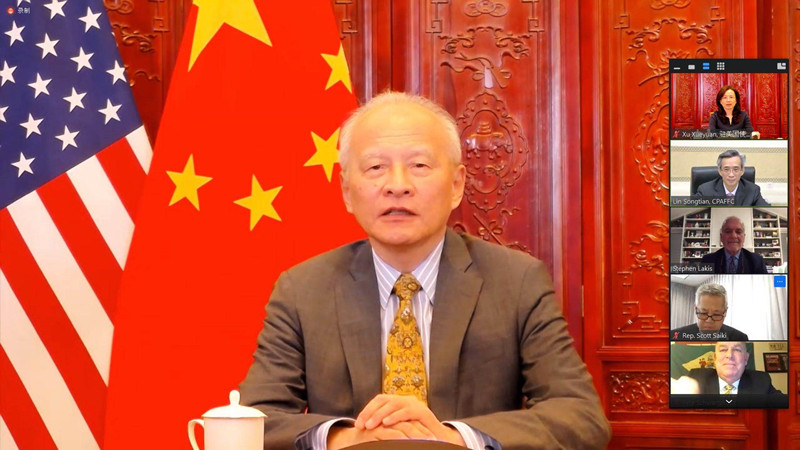 Chinese Ambassador to the United States Cui Tiankai said that cooperative and stable China-U.S. relations fit the common interests of both peoples.

"There are a thousand reasons for China-U.S. relations to improve, but none to worsen the ties," Cui said as he congratulated the successful hosting of the Virtual Conference of the 5th China-U.S. Subnational Legislatures Cooperation Forum on Tuesday via video link.

The forum was co-hosted by the Chinese People's Association for Friendship with Foreign Countries (CPAFFC) and the State Legislative Leaders Foundation (SLLF) of the United States.

The ambassador noted the significance of the forum being the first institutional activity of exchanges and cooperation between China and the U.S. to have resumed after the new U.S. administration took office.

In his video message, Cui said that the attending Chinese and U.S. local legislators are all representatives of the general public. They have expressed the strong willingness of both peoples to have friendly exchanges with each other.

The ambassador added that he believes through this event, the two sides will be able to understand more about each other and deepen their cooperation as the forum has provided a crucial opportunity to cement the bilateral ties.

He said the past year has been turbulent for many people with the ravaging pandemic and the cooling China-U.S. ties. As China enters the first year of its new development plan, the 14th Five-Year Plan, with a new U.S. administration in office, the dynamic of the bilateral ties could affect various aspects.

These aspects could be both countries' major agendas, the global fight against the COVID-19 pandemic as well as the post-pandemic economic recovery, Cui said.

Participants of the forum included lawmakers from seven Chinese provinces and municipality and legislators from seven U.S. states. They vowed closer exchanges and cooperation between the two sides.