Fifteen people were shot, one person was being questioned and multiple suspects were being sought after gunfire erupted outside a funeral home on Chicago’s South Side where at least one squad car was present, police said. 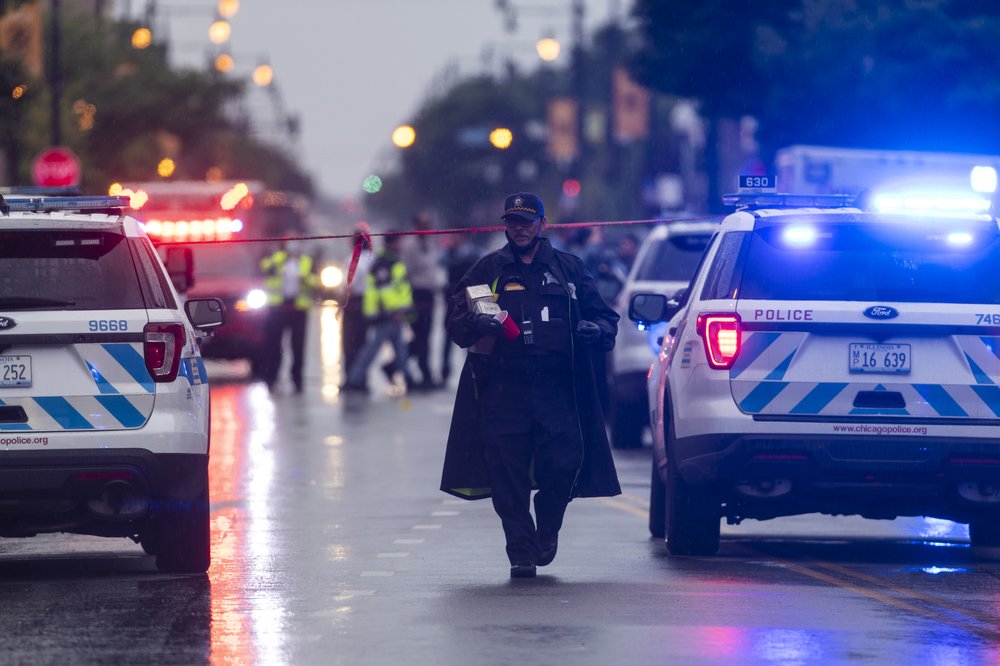 Chicago police investigate the scene of a mass shooting where more then a dozen people were shot in the Gresham neighborhood, of Chicago, Tuesday, July 21, 2020. (Photo: AP)

First Deputy Superintendent Eric Carter said mourners outside a funeral home in the Gresham neighborhood were fired upon Tuesday from a passing vehicle. Carter said several targets of the shooting returned fire. The vehicle later crashed and the occupants fled in several directions. Carter said all the victims were adults.

A person of interest was being questioned Tuesday night but no arrests had been made, police said.

Police spokeswoman Sally Bown confirmed Wednesday morning ahead of a news conference planned by the city’s police superintendent and mayor that the 15 people were shot. Police were still trying to determine what sparked the shooting, including whether it may have been gang-related, she said.

“At this point I don’t think they know,” Bown said.

The shooting comes as the Department of Homeland Security is planning to deploy dozens of federal agents to Chicago to deal with an uptick in violent crime in the city.

Most victims were taken by the Chicago Fire Department to nearby hospitals in serious condition, said spokesman Larry Langford. They include 10 women from the ages of 21 and 65, including one of whom was shot in the chest, police said. The 65-year-old was treated at the scene.

Other victims include a man who was shot in the chest, arm and forearm, and two men, 32 and 22, who were shot in a hand, police said. An update on the shooting posted online by police early Wednesday showed that six people were in serious condition and that the nine others were in good condition.

More gun violence struck early Wednesday. A few miles away in the city’s South Shore neighborhood, a 3-year-old girl was hospitalized in serious condition after being shot in the head while riding in a vehicle with her parents, police said. Her parents told police two people fired at them from a corner. No one was immediately arrested.

Police said Tuesday’s shooting outside the funeral home happened at or near the site of a funeral or post-funeral event for a man fatally shot last week in the Englewood neighborhood.

Arnita Geder and Kenneth Hughes said they heard gunshots while in their home watching television, adding that they came outside to find bodies that were shot up and “laying everywhere.”

“We thought it was a war out here,” Geder told the Chicago Sun-Times. “It’s ridiculous all the shooting that’s going on out here, it really has to stop.”

Chicago Mayor Lori Lightfoot said Tuesday night in a series of Twitter posts that “far too many people” have attended funerals and attempted to begin the process of healing entire communities following another “senseless tragedy.” She added that people with information should speak up, even if anonymously.

“When a person picks up a gun, we suffer as a city. This cannot be who we are. Too many guns are on our streets and in the hands of people who should never possess them,” Lightfoot continued. “These individuals will be held accountable.”

Carter said at least 60 shell casings were found at the scene of the shooting. It wasn’t immediately known if anyone other than attendees of the funeral were victims, nor if anyone in the SUV had been wounded. The person being questioned was uninjured, according to authorities. Investigators haven’t determined how many people were involved in the shooting.

A squad car was assigned to monitor the funeral as a precaution because of the sizable number of mourners attending, Carter said, adding that he was unaware of any warnings from community activists that trouble at the funeral was imminent.

“The district commander took every precaution that he could,” Carter said.

Lightfoot, after threatening to sue if President Donald Trump acted without her permission, also noted earlier Tuesday that the city would be working with federal agents to fight crime.

Lightfoot has been skeptical of federal agents being sent to Chicago by Trump due to the controversy in Portland, Oregon, where the Trump administration sent federal officers after weeks of protests there over police brutality and racial injustice that followed the killing of George Floyd in Minneapolis.

Lightfoot said she expects Chicago will receive resources that will plug into existing federal agencies that already work with the city, including the FBI, Drug Enforcement Agency and the Bureau of Alcohol, Tobacco, Firearms and Explosives.

Trump has framed such protests in the nation’s large cities as a failure by “liberal Democrats” who run them, praised the officers’ actions and said he was looking to send agents to other cities.

He pointed to rising gun violence in Chicago, the nation’s third-largest city, where more than 63 people were shot, 12 fatally, over the weekend.