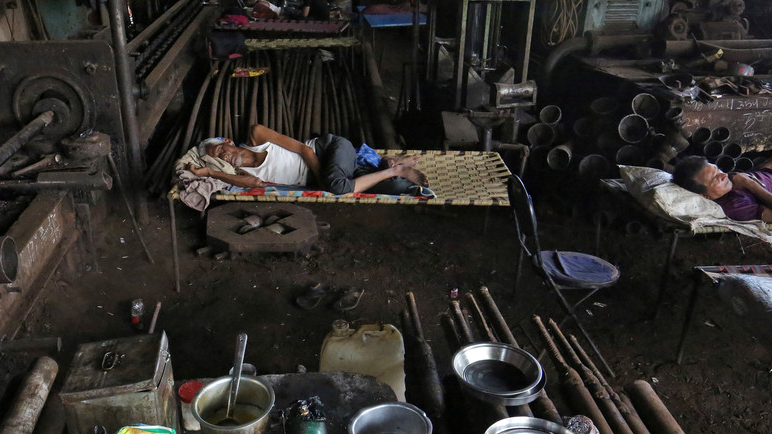 Migrant workers rest inside a workshop after it was shut due to the 21-day nationwide lockdown to curb the COVID-19 pandemic, in Mumbai, India, April 7, 2020. (Photo: Reuters)

The economic crisis caused by the coronavirus pandemic could plunge up to 115 million people into extreme poverty this year, rolling back global efforts to alleviate poverty, warned a World Bank report.

The bank defines extreme poverty as living on less than 1.90 U.S. dollars. Between 9.1 and 9.4 percent of the world's population in 2020 would be affected by the economic fall out of the pandemic.

The projected poverty rates in 2020 are similar to those in 2017, meaning the impacts of COVID-19 are expected to set back progress toward ending extreme poverty by at least three years.

"The pandemic and global recession may cause over 1.4 percent of the world's population to fall into extreme poverty," said David Malpass, president of World Bank Group.

As a result of the pandemic, along with armed conflicts and climate change, extreme poverty would rise for the first time in over 20 years. South Asia would be the hardest hit region, with 49 million additional people pushed into extreme poverty.

The second most affected region would be Sub-Saharan Africa, with 26-40 million additional people predicted to be pushed into extreme poverty.

The cocktail of COVID-19, armed conflict and climate change will also make it challenging to meet the goal of ending poverty by 2030. These factors would push up the global poverty rate to about 7 percent.

But the economic downturn would impact urban dwellers and a majority of them could slip into extreme poverty, a phenomenon traditionally affecting people in rural areas.

According to trends, progress toward containing extreme poverty started becoming sluggish much before the coronavirus pandemic. Between 2015 and 2017, the poverty reduction slowed to less than half a percentage but helped pull out 52 million people from the clutches of poverty. Global poverty had dropped at the rate of around one percentage point per year between 1990 and 2015.

Researchers suggested the governments take collective action to ensure years of progress in poverty reduction are not erased. Efforts to confront poverty caused by COVID-19 also face threats that disproportionately impact the world's poor at the same time, particularly conflict and climate change, they added.