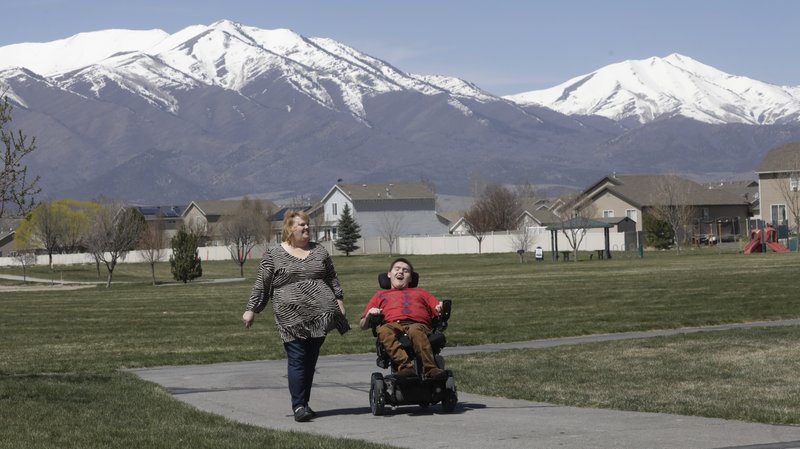 In this April 14, 2020, photo, Jodi Hansen walks with her son Jacob Hansen near their home, in Eagle Mountain, Utah. Even before the new coronavirus hit, cystic fibrosis meant a cold could put Jacob Hansen in the hospital for weeks. He relies on hand sanitizer and disinfecting wipes to keep germs at bay because has cerebral palsy and uses a wheelchair, but these days shelves are often bare. For millions of disabled people and their families, the coronavirus crisis has piled on new difficulties and ramped up those that already existed. (Photo: AP)

Even before the coronavirus hit, cystic fibrosis meant a cold could put Jacob Hansen in the hospital for weeks. He relies on hand sanitizer and disinfecting wipes to stay healthy because he also has cerebral palsy and can’t easily wash his hands from his wheelchair, but these days shelves are often bare.

For millions of disabled people and their families, the coronavirus crisis has piled on new difficulties and ramped up those that already existed. Many are immunocompromised and therefore more vulnerable to infection, but terrified of new coronavirus-era hospital guidelines they fear could put them at risk.

The leader of the U.N. said Wednesday the 1 billion people living with disabilities around the world have been among the hardest-hit by the virus. Secretary-General Antonio Guterres called for them to have equal access to prevention and treatment of COVID-19 as the pandemic exposes and intensified global inequalities.

In the U.S., a number of states are moving toward reopening businesses shuttered by the virus, but many people with disabilities are staying behind closed doors, worried that more interaction could lead to a wave of new infections.

“It’s honestly kind of scary, with my disability even the common sniffles could put me in the hospital,” said Hansen, who usually likes volunteering at the library and rubbing shoulders with superheros at Comic-Con.

Hansen, 20, has done well with a new medication and was ready to start a grocery-store job near his Utah home before the virus hit, but the infection risk has put a stop to that for now. He used to have help from health-care workers with things like eating and bathing, but they had to stop coming after one had a potential exposure. The coronavirus test turned out to be negative, but they decided the risk was too high. Now Jodi Hansen does most of those things for her son, bringing drinks, scratching itches and bathing him, even though she has a bad shoulder and is working 40 hours a week from home at her as a transition coordinator for the Utah Parent Center.

“I’ve definitely had one full panic attack,” said Jodi Hansen. “I look at my eyes in the morning. I’ve got bad undereye circles. I just don’t sleep well at all.”

Oklahoma mom Lisa DeBolt felt like she had to make a similar decision in caring for her son Chandler, who also has cerebral palsy. While her husband works in facilities management for a church, she’s helping with things like medication, hygiene and a feeding pump.

“We just have such a small little family to rely on right now,” she said.

Both moms worry not only about the virus might affect their sons but how a hospital stay might unfold.

They live in states where advocates say people with disabilities may end up at the back of the line for scarce resources like ventilators if hospitals become overwhelmed. Advocacy groups have filed complaints in several states, including Kansas, Tennessee, Washington state and Oklahoma over government guidelines they say wrongly disadvantage people with disabilities.

“We don’t want people who are disabled have to fear going to the doctor,” said Shira Wakschlag, legal director at The Arc, the largest national organization advocating for people with intellectual disabilities.

Known as care-rationing or triage guidelines, the documents are meant to help doctors and nurses handle a nightmare scenario. The goal is save the largest number of lives, and create a system to make data-based decisions, said Govind Persad, who studies bioethics at the University of Denver’s Strum College of Law.

“If you put people under time pressure making these decisions, it’s more likely to lead to all kinds of biases,” he said.

Each state’s guidelines are a little different, but too many allow patients to be downgraded simply for things like needing help with daily activities, or based on a perceived quality of life, Wakshlag said. Instead, her group and others like Disability Law Centers in Utah and Oklahoma say the guidelines should encourage doctors to focus on how much the patient can benefit from care.

Advocates had an early victory when the U.S. Department of Health and Human Services, after the first complaints were filed, sent out a guidance to all states warning that anti-discrimination laws still apply. And guidelines that said people with intellectual or cognitive disabilities may not be good candidates for care in Alabama have been withdrawn.

Utah has also created a revised document, and in Washington state, health officials have acknowledged the concerns and sent out their own bulletin on non-discrimination. They’re also talking with activists about equal access to care, including Ivanova Smith, chair of the group Self Advocates in Leadership.

She’s on the autism spectrum, and even though her weakened lungs and a central nervous system make her vulnerable to the virus sensory issues make it impossible for her to wear a mask even as more Americans don them to keep the virus from spreading as they begin venturing from their homes more often.

“It has given me anxiety, I’ve had to take more of my meds,” she said. “COVID-19 has actually affect our community even harder, a lot of us have weaker immune systems and we really depend on that care ... This is causing an emotional, mental toll on our community.”

For Smith, like many people closed in by the virus, staying in contact with family and friends through video calls has helped her get through it, but that doesn’t work for everyone.

Josh Miller has intellectual disabilities and can’t understand why he can’t see grandparents and friends. But he also has vision problems, so staring at a screen is painful. “It gets too overwhelming, he has migraines,” said his mother, Jennifer Sollars-Miller.

If he ends up in the hospital, his mother worries about coronavirus-era rules that bar visitors to stop the spread of the virus. Josh also has Tourette’s syndrome, so it’s hard for him to communicate by himself and he’s prone to yelling inappropriate things without her nearby.

“We were not prepared for this,” she said. “There are so many things you think about that could happen ... this is not something we ever imagined.”