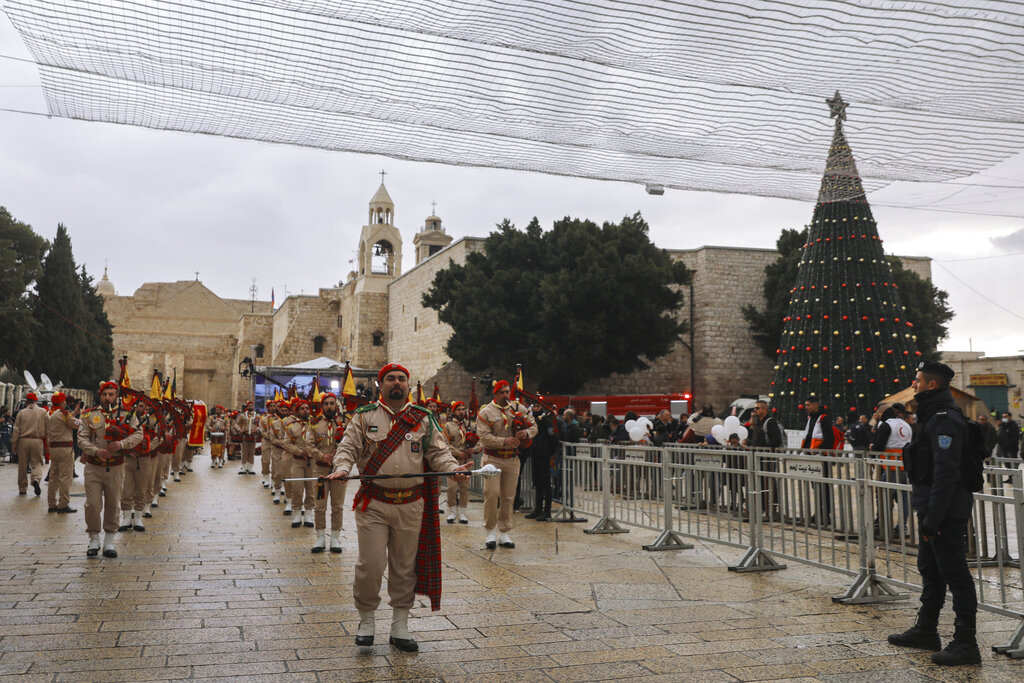 Palestinian scout band members parade through Manger Square at the Church of the Nativity, traditionally believed to be the birthplace of Jesus Christ, during Christmas celebrations, in the West Bank city of Bethlehem, Friday, Dec. 24, 2021. (Photo: AP)

The biblical town of Bethlehem is gearing up for its second straight Christmas Eve hit by the coronavirus -- with small crowds and gray, gloomy weather dampening celebrations Friday in the traditional birthplace of Jesus.

A ban on nearly all incoming air traffic by Israel -- the main entry point for foreign visitors heading to the occupied West Bank -- kept international tourists away for a second consecutive year. The ban is meant to slow the spread of the highly contagious omicron variant, which has shaken Christmas celebrations around the world.

Instead, local authorities were counting on the Holy Land’s small Christian community to lift spirits.

Bethlehem’s mayor, Tony Salman, said the town was optimistic that 2021 would be better than last year’s Christmas, when even local residents stayed home due to lockdown restrictions. Bethlehem planned a return of its traditional marching band parades and street celebrations.

“Last year, our festival was virtual, but this year it will be face to face with popular participation,” Salman said.

Pizzaballa was scheduled to celebrate Midnight Mass at the nearby Church of the Nativity — which houses the grotto where Christians believe Jesus was born.

About 100 tourists, nearly all of them Palestinians, milled about behind the barricades to celebrate the occasion.

Before the pandemic, Bethlehem would host thousands of Christian pilgrims from around the world, bringing a strong dose of holiday spirit to the town and a huge jolt to the local economy. The loss of international tourism has hit Bethlehem’s hotels, restaurants and gift shops especially hard.