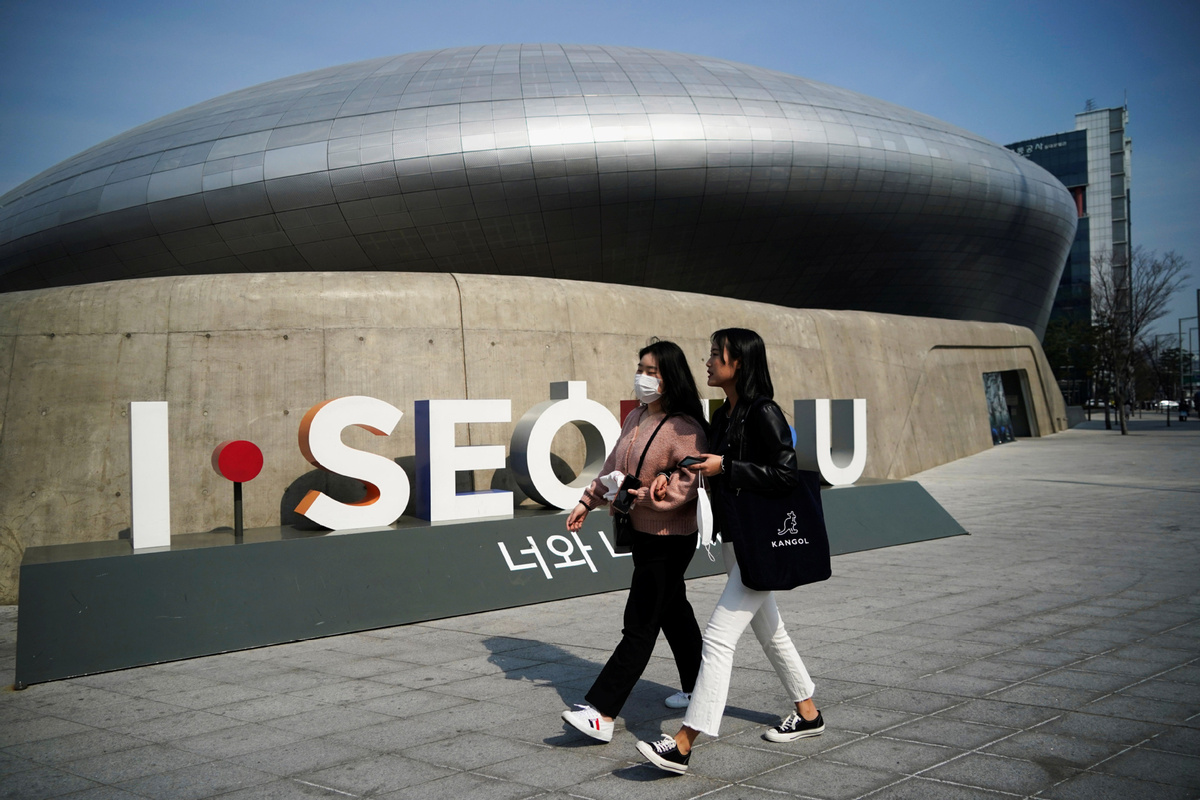 Women wearing masks to protect against contracting the coronavirus disease (COVID-19) walk along a street in Seoul, March 25, 2020. (Photo:Agencies)

Business in the South Korean tourism industry－hit hard by the coronavirus pandemic－has plunged by around 90 percent, according to the Korea Association of Travel Agents.

Lee Hoon, professor of the School of Tourism and director of the Tourism Research Institute at Hanyang University in Seoul, said that after those outbreaks, the industry returned to normal and even rebounded in the fourth month. But while these epidemics were confined to one country or some parts of the region, the coronavirus is affecting the whole world.

"It will take a long time for the industry to recover and rebound from COVID-19," said Lee, adding that the cancellations and suspensions of air and sea services in the wake of the pandemic have created huge travel barriers.

In December, South Korea had aimed to attract 20 million foreign tourists this year, but the pandemic is making it hard for the country to achieve that goal, according to Park Sangwon, associate professor of the School of Hotel and Tourism Management at The Hong Kong Polytechnic University.

Across South Korea, which has 1,883 hotels, the average occupancy rate is less than 10 percent, compared with more than 70 percent in March last year, according to the Korea Hotel Association.

Noting the extremely limited numbers of passengers visiting and leaving South Korea, Park said the air transportation industry will be among the hardest-hit sectors during the pandemic.

It's estimated the country will suffer a 14 percent decline in the number of visiting air passengers with revenue falling by $2.8 billion, according to the Yonhap news agency, which cited a report by the Korea Culture and Tourism Institute.

To support the industry, the South Korean government has proposed massive financial aid, including the expansion of a primary collateralized bond obligations scheme to 6.7 trillion won ($5.46 billion) that could cover airlines and the tourism industry, Yonhap has reported.

The government is seeking to help the industry through loans, providing subsidies for employment retention, and the postponement of tax payments.

Besides support in cash, local governments are also offering coupons to stimulate consumption in an effort to sustain the economy, said Park.

Lee said the South Korean government can provide prompt support because of its experience from previous disease outbreaks.

Though the domestic situation in South Korea has been improving, the KATA spokesperson said it is unclear how tourism can recover with the pandemic's effect on other countries.

"Compared with the time needed for the industry to recover, what is more critical now is when consumers' demand for travel will resume," the spokesperson said.

Lee said the demand for domestic tourism will expand with an increase in the range of diversified activities on offer within the country.

"In the long run, the demand for outbound tourism is expected to recover after August, but it will depend on when exactly the COVID-19 situation will be eased," Lee said.

Park said that as China and South Korea have managed their outbreaks relatively well, travel flows between the two countries will go back to normal in line with progress against the pandemic.