Housing shortages, the environment, health care, education. Dutch voters have plenty of issues to consider in next week's election but one towers over all others: the COVID-19 pandemic. 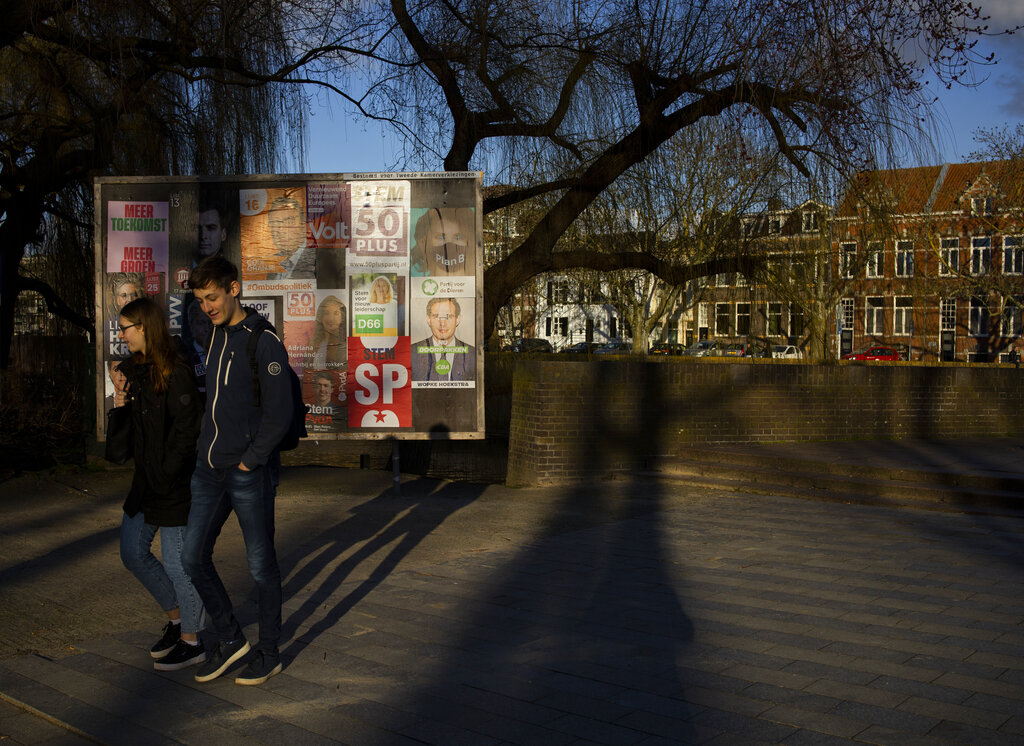 The Dutch vote for the 150-seat lower house of parliament, deeply conscious that more than 16,000 people in the Netherlands have died of COVID-19 and the country is in the midst of a tough lockdown that includes a night-time curfew.

“I do indeed think that the elections this year are really about the coronavirus, of course,” said student Ayoub Aouragh. “Because we have seen that the Cabinet has made many mistakes in the past and we now actually want to see how we can emerge from this together.”

Many voters approve of Prime Minister Mark Rutte's handling of the crisis. His popularity shot up early in the pandemic as he appeared regularly on television to inform the country in statesmanlike tones of the latest lockdown measures and urge unity in the fight against the virus.

But slip-ups later — the Netherlands was the last of the European Union's 27 countries to begin a vaccination campaign — meant that Rutte's popularity is receding slightly as the three-day vote starting Monday draws nearer.

But his People's Party for Freedom and Democracy, known by the Dutch acronym VVD, still has a large lead in the polls, although pollsters say many voters may still be undecided. If the VVD captures the largest cut of the vote, Rutte will be first in line to begin talks to form the country's next ruling coalition, a process that could take months. 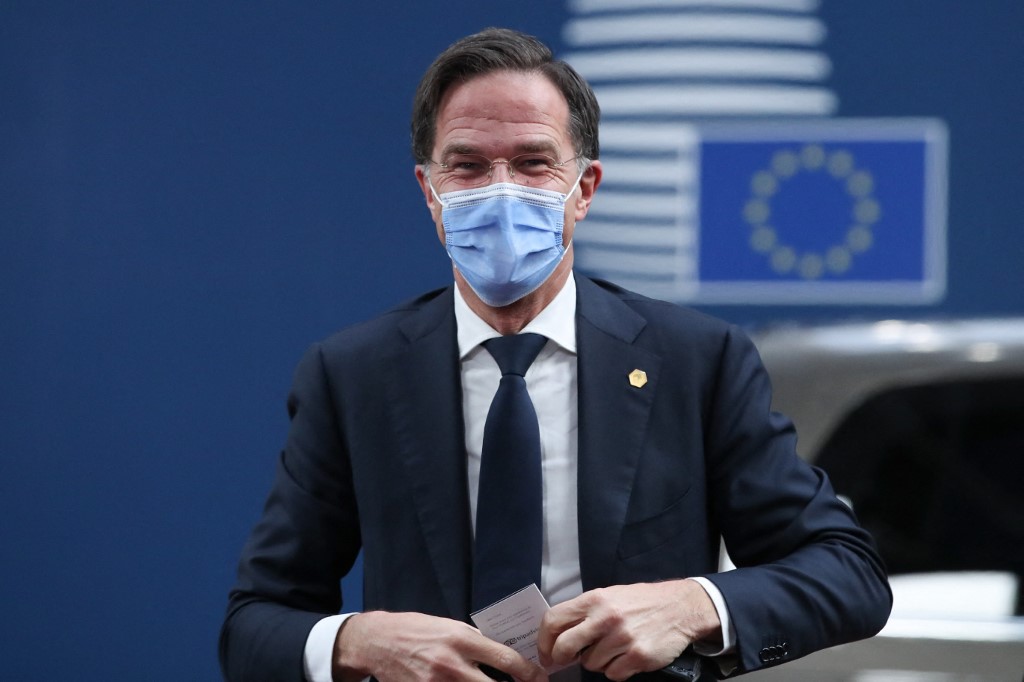 The 54-year-old has led the country for more than 10 years, the last four at the helm of a four-party coalition, and could become the longest-serving Dutch leader if he wins another four-year-term.

Rutte extended the country's tough lockdown on Tuesday, but also offered a glimmer of hope that a relaxation at the end of the month could allow people to visit cafes' outdoor terraces if infection numbers decline or remain stable.

He insisted the optimism had nothing to do with electioneering.

“If that were the case, we'd have announced them now for now, you'd be better doing it immediately, but that simply is not possible,” he said. “You mustn't mix the election up in this.”

Other parties have been increasingly keen to do just that.

“What are you doing Premier Rutte? You are holding an entire country hostage in fear and captivity,” said anti-immigrant lawmaker Geert Wilders, a fierce critic of the government's coronavirus policy.

With a record 37 parties vying for votes, some feel there are plenty of other issues to consider.

“It’s too much about COVID in a way," Sigrid Kaag, leader of the centrist D66 party, told The Associated Press. She said voters must decide "where the turning point is in terms of the significant investments required for education, the jobs of the future, the green economy, and as I mentioned, combating the climate crisis.”

André Krouwel, a political scientist at the Vrije Universiteit Amsterdam, said the pandemic has shifted people's focus toward the economy.

“People’s preferences have turned to the left. They’ve seen that people now need support, financial support from the government," he said. "So the economy is back on top, whereas in the previous four or five elections, immigration was the core issue.”

The virus also has altered the entire Dutch election campaign and voting process.

Shaking hands with voters and traditional election rallies were all but impossible under the lockdown, so politicians have appeared frequently on television and gotten creative online. Rutte went on TikTok and answered questions by swatting away table tennis balls with bats marked “Yes” or “No.”

Voting is spread over three days to avoid crowding. Vulnerable groups can vote Monday and Tuesday and everyone else votes on Wednesday. Some municipalities have drive-through polling stations while Amsterdam has one for voters on bicycles. Some 2.4 million people over 70 are also entitled to vote by mail. 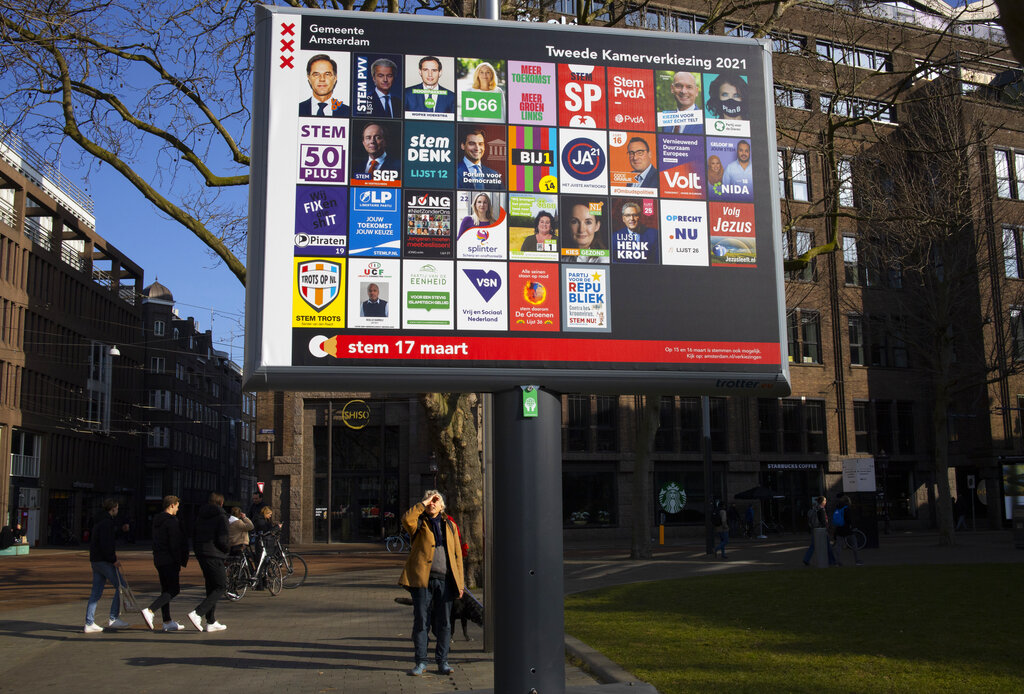 In this Saturday, Feb. 27, 2021 file photo, a man shields his eyes from the sun as he looks up at an election billboard with a multitude of political parties, in Amsterdam, Netherlands. (Photo: AP)

Results are expected to start coming in late Wednesday night.

Wilders leads the largest opposition party and polls suggest that won't change, but mainstream parties are reluctant to enlist him in the next ruling coalition because of his strident rhetoric criticizing Islam.

The right-wing populist Forum For Democracy is forecast to at least double the two seats it won in 2017 despite damaging internal fighting over reports of anti-Semitism in the party's youth ranks.

Unlike other political leaders, Forum leader Thierry Baudet has held election rallies. He is witheringly critical of lockdown measures and plays down the gravity of the coronavirus. Twitter recently labelled one of his tweets — about his reasons for refusing to get vaccinated — “misleading.”

Two prominent women are in the running, both former ministers of overseas aid and cooperation: Lilianne Ploumen of the center-left Labor Party and D66 leader Kaag.

One of them could appeal to Aouragh, an 18-year-old finance student in Rotterdam who is voting for the first time and wants a change in government.

“More mixed," he said. "Something a bit different from what we've seen under Rutte over the last years.”