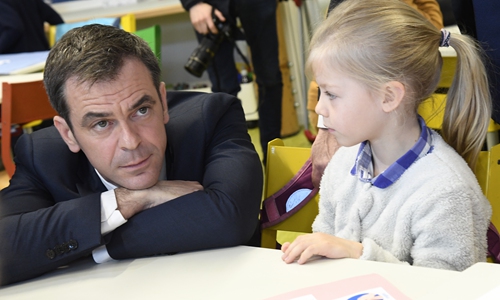 French Health and Solidarity Minister Olivier Veran visits a school near Paris to promote student hygiene to avoid the spread of coronavirus on Wednesday. (Photo: AFP)

The novel coronavirus seems to have penetrated the world's political elite as leaders increasingly test positive, with Chinese analysts and some foreigners reached by the Global Times expressing concern that Western political culture hampers curbs on the spread of COVID-19.

The health risks to Bolsonaro, French President Emmanuel Macron, US President Donald Trump and Canadian Prime Minister Justin Trudeau came under the spotlight after their close contacts with some confirmed cases.

"In my country, political leaders are the group of highest mobility and have many trans-regional and transnational activities," Chris Wong, a US PhD candidate, told the Global Times on Sunday.

"I guess when there is a shortage of testing kits, political leaders are the first to have the tests. They also draw much more attention if confirmed," he said.

An eco-agriculture service company manager from Vancouver, Canada said that if a Canadian political leader got infected, it was likely to mean that Canada would take things "a lot more seriously."

"Diseases seldom recognize boundaries, or social status," the Canadian who gave his name as Mike, told the Global Times on Sunday.

In China, officials wore masks to meetings and in public, but in foreign nations the situation is totally different.

"When an emergency like this happens, it is important for the leader to be in the public as much as possible," a resident of the city of Durham in the UK who gave his name as Johnson, told the Global Times on Sunday.

"They are at the center dealing with the problem. Particularly for health officials, they are constantly mixing with people and this will make people inevitably get infected," said Johnson.

Western people don't usually wear masks as "we believe it is to prevent the spread of virus rather than to protect one from getting infected," he said.

It was impossible for Western leaders to wear masks, have their temperatures taken publically, or reduce public appearance as they need to show closeness with the public for the sake of their own political achievement in an emergency like this, Wang Yiwei, director of the Centre for European Union studies at the Renmin University of China in Beijing, told the Global Times on Sunday.

Wang explained that Western electoral politics made elected leaders act from the point of view of economics and ratings, not wanting to harm certain interest groups.

Spanish Prime Minister Sanchez gave a nationally televised address before the news of his wife's infection. Prior to the address, he presided at a seven-hour cabinet meeting where all ministers were present, according to Fox News.

The cabinet meeting will still take place next week, according to Reuters.

The social culture of "la bise" or kissing on both cheeks, and handshakes in political situations, also increases the risks.

When Trump declared a national emergency from the Oval Office on Friday, he and other officials shared the same microphone and shook hands. Many were filmed touching their faces.

"I do hope those country leaders could reduce the frequency of meeting each other," a Beijing resident, surnamed Zhang, told the Global Times in an interview.

"Can't they just make a phone call to figure out a solution to joint epidemic control or suspend cabinet meetings or shift to online?"