The UN Security Council (UNSC) on Saturday called for "full adherence to the ceasefire" in the conflict between Israel and Palestinians in the Gaza Strip in its first statement since violence erupted on May 10. 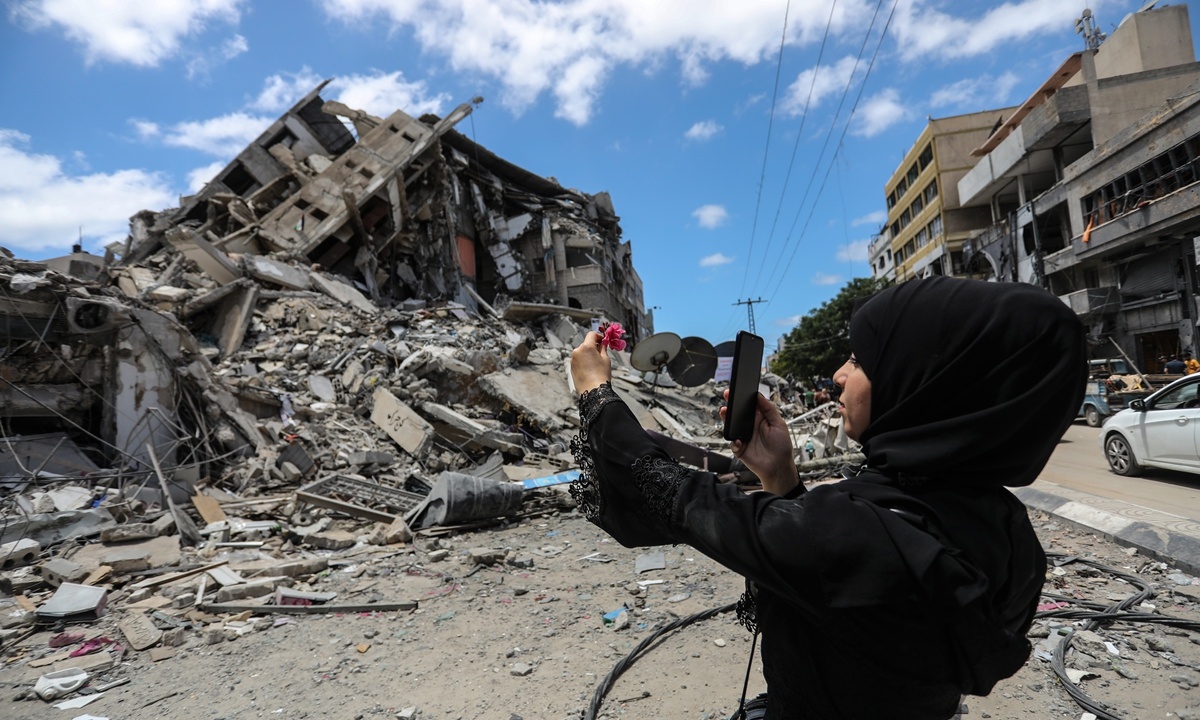 Palestinian woman takes a selfie near the rubble in Gaza city on Saturday, Gazans tried to piece back their lives after a devastating 11-day conflict with Israel that killed more than 200 people and made thousands homeless in the impoverished Palestinian enclave. Photo: VCG

Security Council members also stressed "the immediate need for humanitarian assistance to the Palestinian civilian population, particularly in Gaza." The statement received backing from the US delegation - which had blocked earlier drafts - only after the removal of a paragraph condemning the violence, a sensitive issue since it raised the question of blame.

An earlier draft said that "Security Council members condemned all acts of violence against civilians, including acts of terror, as well as acts of provocation, incitement and destruction."

That draft also "expressed concern about the tensions and violence in east Jerusalem, especially in and around the holy sites, and urged for the respect of the historic status quo at the holy sites."

In a statement Saturday, the Israeli Foreign Ministry thanked the US "for its continued support for Israel and its right to defend its citizens," and it placed "full blame" for the recent violence on Hamas militants for firing thousands of rockets at Israel.

"We expect that the international community [will] condemn and disarm Hamas, and ensure Gaza's rehabilitation while preventing the diversion of funds and weapons to terrorism," the statement said.

There was no immediate reaction from the Palestinian side.

The US delegation, always one of Israel's strongest supporters in the UN, had also rejected a French draft demanding an immediate end to hostilities and calling for the unimpeded distribution of humanitarian aid throughout Gaza.

The final statement, proposed by China, Norway and Tunisia, noted that the Council members "mourned the loss of civilian lives resulting from the violence."

It supported a call from Secretary-General Antonio Guterres for the international community to work with the UN to develop a "robust package of support for a swift, sustainable reconstruction and recovery." The Council reiterated the importance of achieving a comprehensive peace based on the vision of a region where Israel and the Palestinians live side by side in peace with secure borders.

The statement also recognized "the important role Egypt [and] other regional countries" played in it, as well as the so-called Middle East Quartet, comprising the US, Russia, the European Union and the UN. The devastating 11-day conflict claimed the lives of at least 248 Palestinians, including 66 children, while 12 people died in Israel, including one child.

The Security Council is scheduled to take up the Israeli-Palestinian conflict again Thursday during a regular monthly meeting scheduled before the conflict broke out. A day after the cease-fire took hold Friday, ending deadly Israeli air strikes on the coastal enclave and the rocket fire out of it toward Israel, authorities were distributing supplies in Gaza.