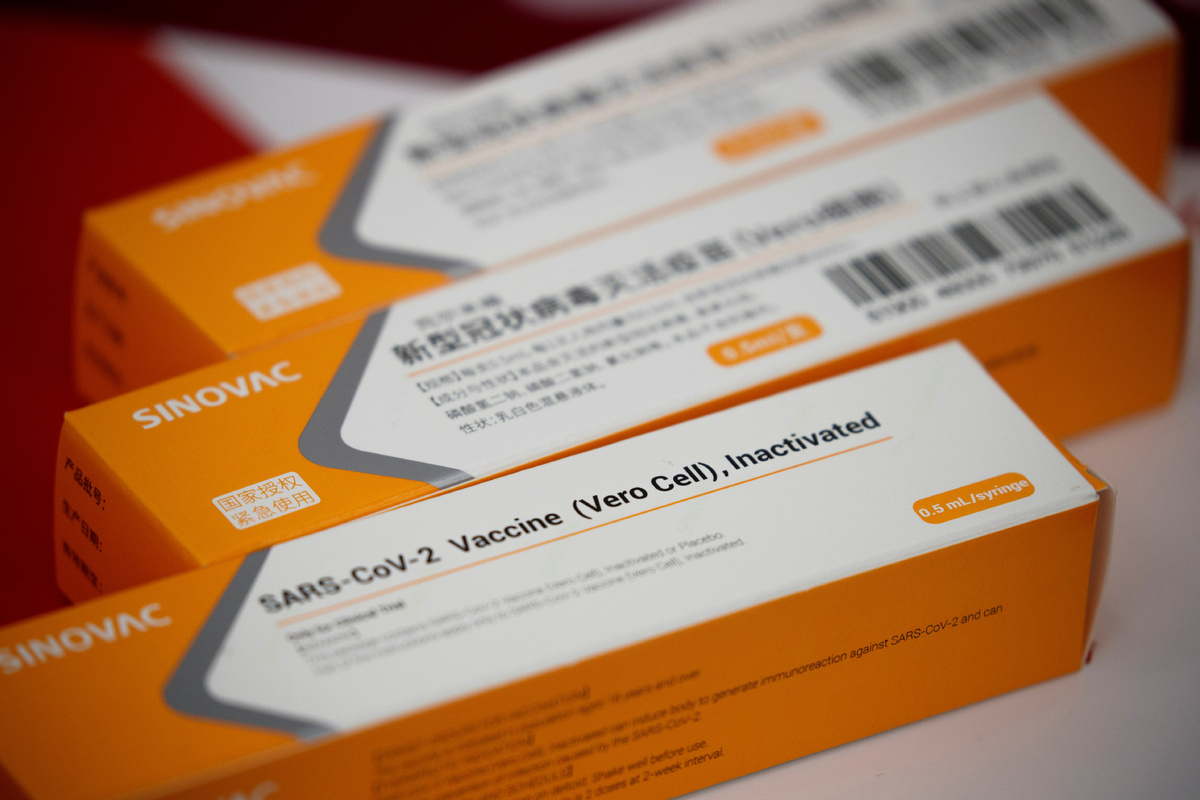 A display shows packages of vaccine candidate for SARS-CoV-2 by Sinovac Biotech in Beijing on Sept 24, 2020. (Photo: Agencies)

Coronavirus infections have surged again across the world amid the onset of winter, with many countries strategizing to secure vaccines to protect their populations.

US President Donald Trump's lawyer Rudy Giuliani also tested positive for COVID-19, the latest in a long string of people close to the White House. Giuliani, 76, was admitted to the Medstar Georgetown University Hospital in Washington on Sunday, according to US media.

The White House has been criticized for shunning safety guidelines, with Trump himself testing positive for COVID-19 in October.

California's Governor Gavin Newsom has announced that more than half of the US state's 40 million people are subject to a stay-at-home order and many businesses will be closed.

A Reuters tally showed that more than 281,000 people in the US have died from COVID-19.

For the past two weeks, the US has regularly seen more than 2,000 deaths a day, similar to the early days of the pandemic. The surge could be partly due to last week's Thanksgiving holiday, when millions of US residents traveled around the country, BBC reported.

US President-elect Joe Biden, who is expected to be sworn in on Jan 20, plans to nominate California's Attorney General Xavier Becerra as secretary of health and human services and Rochelle Walensky, chief of infectious diseases at Massachusetts General Hospital, to run the US Centers for Disease Control and Prevention, Reuters reported.

In India, data from its federal health ministry showed on Monday that 32,981 new coronavirus cases were reported in the last 24 hours.

The South Asian country's cumulative cases now total 9.68 million, the second-highest tally in the world after the US, according to Reuters.

Japan's Chief Cabinet Secretary Katsunobu Kato said on Monday that the government will send doctors and nurses from the country's de facto army, the Self-Defense Forces, to the northern and western prefectures of Hokkaido and Osaka where the coronavirus is rapidly spreading, according to Japan's news agency Jiji Press.

Japan's public broadcaster NHK reported that the city of Asahikawa in Hokkaido has seen infection clusters at local hospitals.

South Korea's President Moon Jae-in on Monday ordered testing for the virus to be expanded by mobilizing the military and more people from the public service, as the country continued to report triple-digit daily new cases, Reuters reported.

Countries are strategizing to secure shots to protect their populations against COVID-19, with Britain and Russia beginning COVID-19 vaccinations this week.

The Serum Institute of India has sought emergency use authorization from its drug regulator for AstraZeneca's COVID-19 vaccine on Sunday, according to Indian media reports, citing the Press Trust of India.

The South Asian country is followed by the European Union, which has confirmed 1.58 billion doses. The US, the worst affected country so far, has managed to purchase just over a billion doses, according to Duke University's Launch and Scale Speedometer analysis.

This, the virologist said, should be enough to develop herd immunity, a form of indirect protection from infectious disease that occurs when a sufficient percentage of a population has become immune to an infection.

Indonesian President Joko Widodo announced on Sunday that the country has received 1.2 million doses from China's Sinovac Biotech and is working to secure another 1.8 million doses by early January, according to Bloomberg.

The World Health Organization hopes to have half a billion vaccine doses through the COVAX facility in the first quarter of 2021. COVAX is a global initiative led by the WHO, the Coalition for Epidemic Preparedness Innovations and international vaccine alliance organization Gavi that aims to bring governments and vaccine manufacturers together to ensure all countries have access to COVID-19 vaccines once they become available.