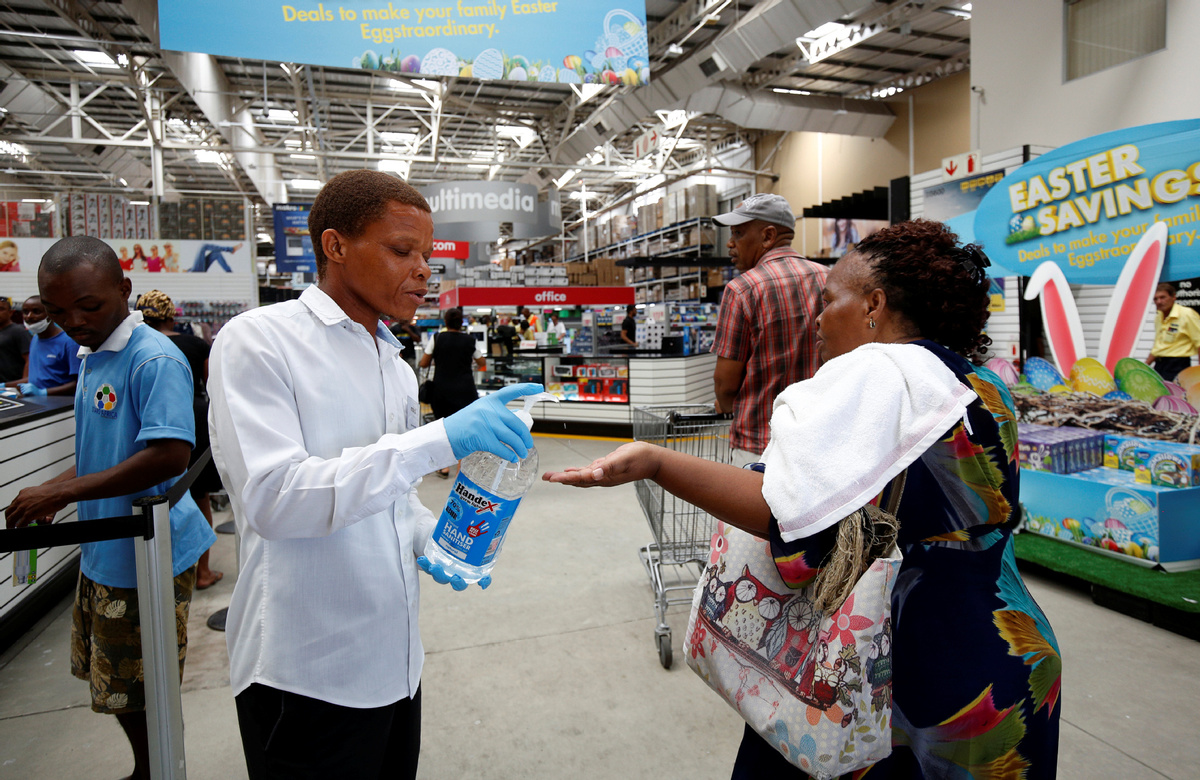 A store assistant gives people hand sanitiser as shoppers stock up on groceries at a Makro Store ahead of a nationwide 21 day lockdown in an attempt to contain the COVID-19 outbreak in Durban, South Africa, March 24, 2020. (Photo: Agencies)

As novel coronavirus spreads rapidly across Africa, with over 2,000 confirmed cases and over 50 deaths, countries have imposed stringent measures to combat the pandemic.

Some of the common measures include temporary closure of learning institutions, banning of public gatherings and meetings, halting of international flights, and closing of land borders, among others, in efforts to control the spread of the deadly virus.

South Africa, which has the highest recorded confirmed cases in the continent at 554, has imposed a 21-day nationwide lockdown effective Thursday.

This will see South Africans stay indoors except under strictly controlled circumstances, such as to seek medical care, buy food, medicine and other supplies, or collect a social grant.

Citizens and residents arriving from high-risk countries will automatically be placed under quarantine for 14 days, while non-South Africans arriving on flights from Italy, Iran, South Korea, Spain, Germany, the United States, the United Kingdom and China, will be turned back.

Egypt, the second hardest-hit country in the continent with 19 deaths, announced on Tuesday that it will impose a two-week curfew, banning movement on all public roads from 7 pm to 6 am.

Making the announcement on Tuesday, Prime Minister Mostafa Madbouly said all mass transport, both public and private, will be halted within the same period.

Madbouly also announced other measures, including closure of all shops and retail stores from 5 pm to 6 am and full closure on Thursday and Friday. Casinos, cafes and entertainment spots will be fully closed for two weeks, while schools and universities will continue being closed.

On Monday, Macky Sall, the president of Senegal, imposed a curfew throughout the nation from 8 pm to 6 am, adding that a limitation or ban on passenger transport from region to region will be imposed.

Sall also ordered the defense and security forces to be ready for the immediate and strict execution of the imposed measures.

Alassane Outtara, the president of Côte d'Ivoire, announced a 9 pm to 5 am curfew and banned all non-essential travel between Abidjan, which has most of the reported confirmed coronavirus cases.

Outtara also authorized the "progressive lockdown of populations by geographic area, depending on the progression of the pandemic."

Felix Tshisekedi, the president of the DR Congo, announced the state of emergency on Tuesday, along with other measures, including closing of borders, banning of flights to and from the capital, Kinshasa, and banning of travel from Kinshasa to other parts of the country.

Tshisekedi also announced closure of all country borders apart from truck, ship and cargo plane traffic with essential freight. The country has so far recorded three deaths from coronavirus.

Despite having not recorded a confirmed case of coronavirus, Sierra Leone announced a one-year-state of emergency effective from Tuesday, to enable the government to appropriately respond to the pandemic.

Julius Maada Bio, the president of Sierra Leone, said the rapid global spread of the coronavirus poses great risk to human life and can cause enormous socio-economic disruption in his country.

"This situation requires effective measures," Maada said in a televised address on Tuesday.

Kenya, which has 25 confirmed cases of novel coronavirus, has put in place several measures to combat the spread of the disease, including instructing people to work from home and avoid unnecessary travel, and public transport vehicles to limit the number of passengers per trip to avoid spreading the virus.

The country also has banned all international passenger flights and announced mandatory self-quarantine for all citizens and foreigners with permanent residence permits at their own cost.