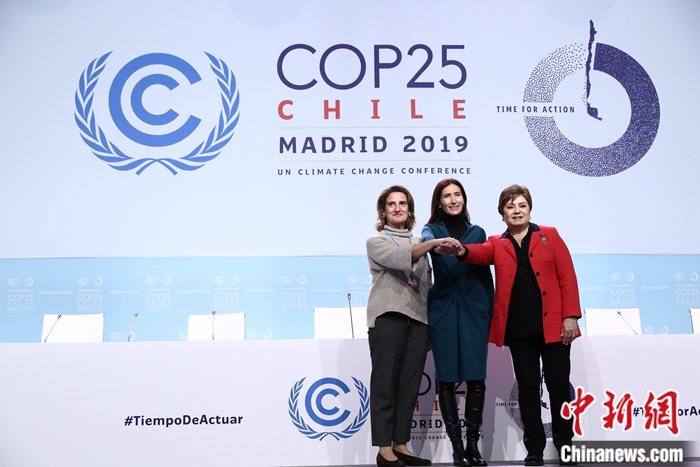 United Nations climate chief Patricia Espinosa urged top delegates to make progress on a highly technical article of the 2015 Paris Agreement when the high-level segment of the UN climate change conference kicked off in Madrid on Tuesday.

The gathering of representatives from almost 200 countries is tasked with putting the finishing touches on rules governing the Paris Agreement by Friday. They reached consensus on most parts of the landmark accord at last years' conference, but not on article six, which includes a market-based mechanism.

Espinosa, executive secretary of UN Climate Change, said: "On both a professional and personal level, my message to you is this: 'We need your decisions. We need your leadership. We are out of time.'"

In her speech to the opening ceremony for the high-level segment, she said article six was of great importance and reaching a consensus on rules governing it was crucial.

"Article six is the only part of the Paris Agreement that directly engages with the private sector, helping them contribute to climate action and, ultimately, to the implementation of NDCs," she said.

Each country has an NDC — a Nationally Determined Contribution — that forms the basis of its national climate action plan. Parties have been asked to update their NDCs by next years' UN climate change conference, adding to the urgency of progress on article six.

Taking into consideration the different carbon emission costs in different countries, article six allows nations to buy emission credits from other countries to help realize their NDCs under an international carbon market.

"We've made progress in the last few days, but we need to push on and finalize our work," Espinosa said.

Referring to the Paris Agreement as an "unprecedented multilateral success story", Espinosa said she was optimistic progress could be made.

Petteri Taalas, secretary-general of the World Meteorological Organization, warned at the opening ceremony that the world is continuing to get warmer.

"Global warming continues. The average global temperature has risen by about 1.1 C since the preindustrial era and the ocean has warmed by half a degree," he said, adding that 220 million people suffered from heat waves last year.

"We have started seeing growth in hunger once again. Now we have more than 800 million people suffering from lack of food."