Air France and Airbus must stand trial on involuntary manslaughter charges over the 2009 crash of a Rio de Janeiro to Paris flight that killed all 228 people on board, a Paris court ruled on Wednesday. 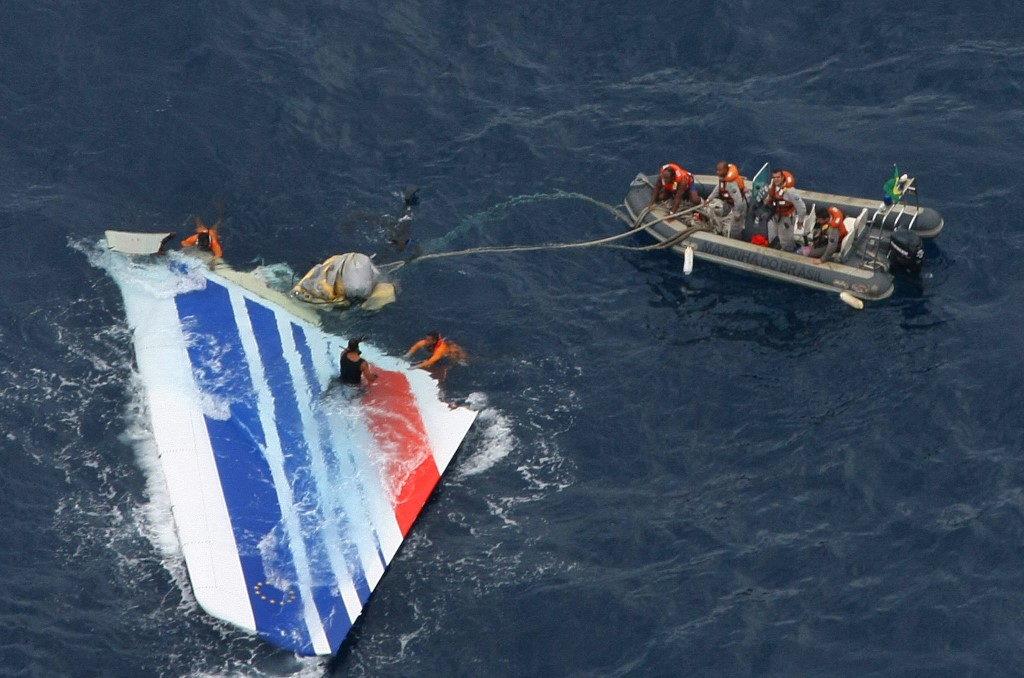 A handout photograph released June 8, 2009 by the Brazilian Navy showing divers recovering a huge part of the rudder of the Air France A330 aircraft lost in midflight over the Atlantic ocean June 1. (File photo: AFP)

Flight AF447 plunged into the Atlantic Ocean during a storm on June 1, 2009, the deadliest crash in Air France's history.

The court followed the general prosecutor's recommendation, overturning an earlier court decision to drop the case against both the French flagship carrier and Europe's top aircraft maker.

It took two years to find the wreckage of the Airbus A330 jet, which was eventually located by remote-controlled submarines at a depth of 3,900 metres (13,000 feet).

Investigators determined that the crash was caused by errors by pilots, who were disorientated by faulty speed monitoring equipment.

Both prosecuting teams contested a 2019 decision to drop the charges by the two investigating magistrates assigned to the case, who said they could not ascribe fault to the companies in what appeared to be a case of pilot error.

But prosecutors accused Air France of indirectly causing the tragedy by providing insufficient training on how to react in case of malfunction of the so-called Pitot tubes, which enable pilots to monitor their speed.

According to a source close to the case, the appeals court found that Air France failed to programme specific training and information sessions for crew "that would have been necessary".

That failure "prevented pilots from responding in the correct way", the source said.

This contradicted findings from the earlier investigation concluding that the combination of elements leading to the disaster would have been very difficult to foresee.

Faults in the monitoring equipment had already been detected in the months leading up to the crash, and the court found that Airbus "underestimated the gravity" of the risks "and did not take the necessary steps to urgently inform crews", the source said.

The pilots reacted incorrectly when the plane stalled after the speed sensors froze over as it flew through a large cloud at high altitude.

Lawyers for Airbus said they would lodge an appeal against the decision, saying it "in no way reflects the conclusions of the investigation, which resulted in no charges against Airbus in this case".

Air France told AFP that it had committed "no criminal act" and that it, too, reserved the right to lodge an appeal.

The Paris appeals court decision had been much awaited by victims' families.

"It's a huge satisfaction to feel that we have finally been heard by the courts," Daniele Lamy, president of an association of victims' families, said after Wednesday's ruling.

"But we still deplore that it took 12 long years to get to this point. Twelve years of unwavering determination, full of uncertainty, of tricky and obscure procedures and of dejection, but never resignation," she said.

"I have to admit that we stopped believing in this outcome these past few years," said Ophelie Toulliou, whose brother died in the crash. "It's a great relief for us."

The French pilots' association also welcomed the decision, with a spokesman saying that "accusations were aimed at the pilots, while the aircraft maker and airline were cleared of all wrongdoing".

But the truth, he said, was that "the instruments didn't function the way they should have".

Since the disaster, pilot training on dealing with unforeseen circumstances has been stepped up in France and several other countries.

Air France and Airbus have stood trial in France once before, over a crash that killed 87 people onboard an A320 near the eastern city of Strasbourg in January 1992. They were both found not guilty.