Courts force rethink on the homeless

The short journey from the parking garage to the Golden Gate Theatre turned out to be more dramatic than the performance itself, said Margaret Lee, who visited downtown San Francisco on a recent night. 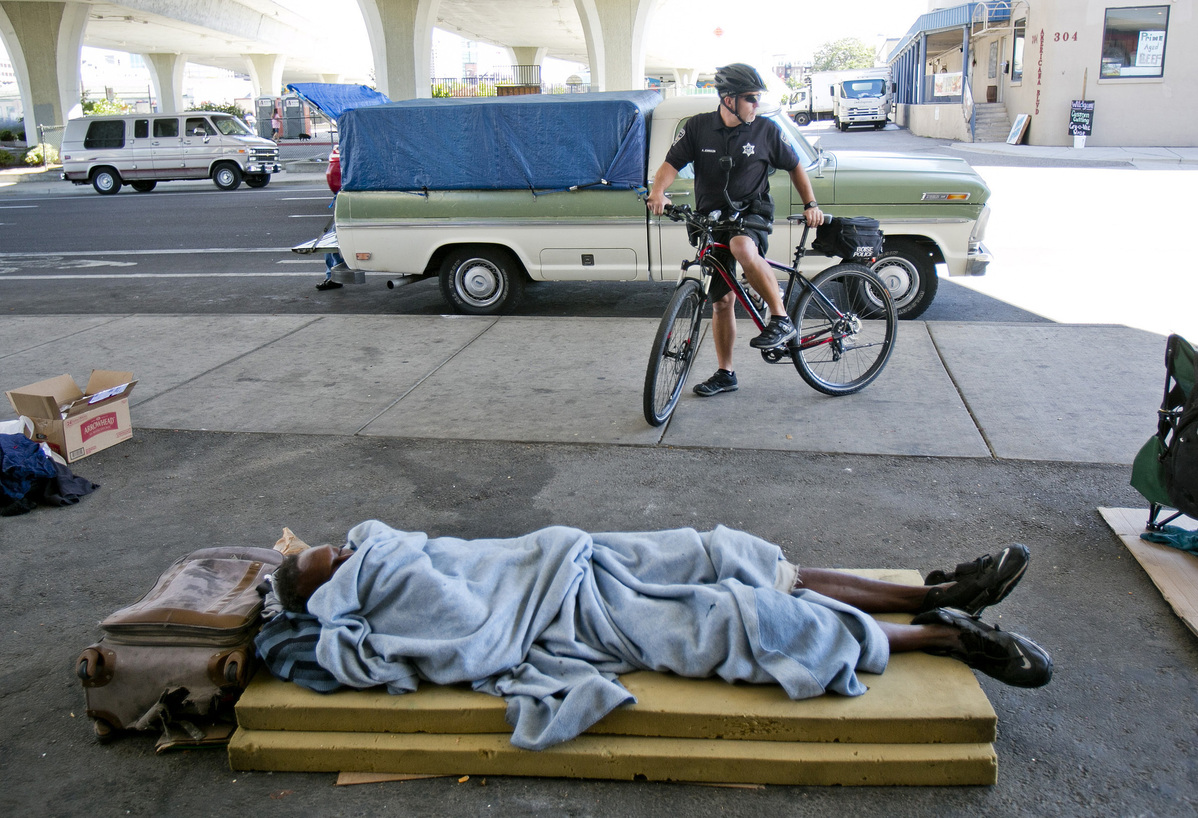 "The homeless people who seemed mentally unstable shouted at me. I saw eight or nine tents in one block, and there were syringes on the sidewalk," said Lee, a resident in the Bay Area.

"I know it's their constitutional right to stay on the streets, but it's also my right to go about my business without fear."

Homelessness in the United States has been most acute in major cities on the West Coast, where encampments are mushrooming on the streets or inside parks, and people are complaining about health and safety threats.

But cities and counties may find it difficult to balance the needs of the homeless and other residents, following a decision by the US Supreme Court last week to decline to review a lower court's ruling on a homeless case.

The case stems from a lawsuit filed by some homeless people who sued the city of Boise, Idaho, for repeatedly ticketing them for violating an ordinance against sleeping outside nearly a decade ago.

Last year, the Ninth Circuit Court of Appeals ruled that the Boise law violates constitutional protections to fine or arrest homeless people for sleeping in public outdoor spaces when no other shelter is available.

The Supreme Court's decision means in states across the Ninth Circuit, including California, Oregon and Washington, local jurisdictions can no longer enforce similar statutes if they don't have enough shelter beds for homeless people sleeping outside.

"The decision reaffirms that cities are unable to criminalize unhoused people for conducting basic acts of survival－sleeping, sitting down, lying down－if they are not offering a place for them to go," said Sam Lew, policy director at the San Francisco-based Coalition on Homelessness.

"It is a decision that rings loud and clear that it is unconstitutional for cities to sweep homeless people off streets and sidewalks and that they have to begin investing in the real solution to homelessness: permanent, affordable housing," she said.

While homeless advocacy groups celebrate the Supreme Court's decision as a "huge victory", some municipalities are concerned that similar lawsuits, which have already been filed against several California cities and counties, will become more frequent.

"California State Association of Counties continues to be concerned about the lack of clarity in the Boise decision, and the potential risk for counties given the significant room for interpretation of the decision," Executive Director Graham Knaus said.

The organization joined an amicus brief filed by 33 California counties, including Los Angeles, San Diego, Fresno and Orange, in September to ask the Supreme Court to review the Boise case.

Now that the court has declined to review that decision, courts will decide on a case-by-case basis, which may cost taxpayers millions and divert public funds away from the ongoing efforts to address homelessness issues, said the California State Association of Counties.

Los Angeles, which also filed an amicus brief in support of Boise, has had a controversial ordinance since 1968 that makes it a criminal offense to sit, lie, or sleep on a public sidewalk anywhere in the city. But much of the ordinance was invalidated by the Boise ruling.

Among the city's 36,300 total homeless population, more than 27,000 are unsheltered and there are only about 8,100 shelter beds, according to the Los Angeles Homeless Services Authority.

For San Francisco, the court action is a "non-issue" because the city's ordinances have already complied with the ruling by offering the ability to have shelter when moving homeless people, said Jeff Kositsky, head of the city's homelessness department.

Lew said there aren't adequate and appropriate forms of shelter in San Francisco and there are consistently more than 1,000 people on the city's adult shelter waiting list.

"Whatever one thinks of this ruling, I think it provides an incentive for cities and counties to do more to help homeless people get off the streets in the shelter and in the housing," California State Senator Scott Wiener said.

Almost half (47 percent) of all unsheltered homeless people in the US are found in California, about four times as high as the state's share of the overall US population, according to a report, The State of Homelessness in America, released by the White House Council of Economic Advisers in September.

"California has a shortage of 3.5 million homes, and that is the root cause for homelessness for most people," said Wiener, who introduced a bill－SB 50－last year to legalize affordable housing near transit and job centers.

But coastal communities refuse to build enough housing, thus pushing out working-class families and spiking homelessness and evictions, he said.

"For decades, people have gotten used to their neighborhoods being exactly the way they are and that's the status quo. What we need to do is readjust our entire approach to housing, so we have to get a different mindset about housing," said Wiener.