WORLD COVID-19 cases rising among US children as schools reopen

COVID-19 cases rising among US children as schools reopen

After preying heavily on the elderly in the spring, the coronavirus is increasingly infecting American children and teens in a trend authorities say appears fueled by school reopenings and the resumption of sports, playdates and other activities. 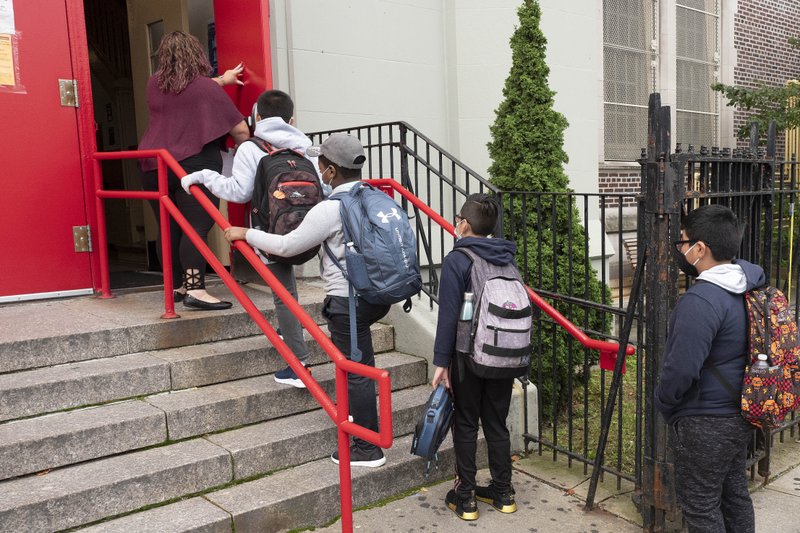 A teacher leads her students into an elementary school in the Brooklyn borough of New York on Tuesday, Sept. 29, 2020, as hundreds of thousands of elementary school students are heading back to classrooms in the city, resuming in-person learning during the coronavirus pandemic. (Photo: AP)

Children of all ages now make up 10% of all U.S cases, up from 2% in April, the American Academy of Pediatrics reported Tuesday. And the Centers for Disease Control and Prevention said Monday that the incidence of COVID-19 in school-age children began rising in early September as many youngsters returned to their classrooms.

About two times more teens were infected than younger children, the CDC report said. Most infected children have mild cases; hospitalizations and death rates are much lower than in adults.

Dr. Sally Goza, president of the American Academy of Pediatrics, said the rising numbers are a big concern and underscore the importance of masks, hand-washing, social distancing and other precautions.

“While children generally don’t get as sick with the coronavirus as adults, they are not immune and there is much to learn about how easily they can transmit it to others,’’ she said in a statement.

The CDC report did not indicate where or how the children became infected.

Public health experts say the uptick probably reflects increasing spread of the virus in the larger community. While many districts require masks and other precautions, some spread in schools is thought to be occurring, too. But experts also say many school-age children who are getting sick may not be getting infected in classrooms.

Just as cases in college students have been linked to partying and bars, school children may be contracting the virus at playdates, sleepovers, sports and other activities where precautions aren’t being taken, said Dr. Leana Wen, a public health specialist at George Washington University.

“Understandably, there is quarantine fatigue,’’ Wen said. Many people have a sense that if schools are reopening, then other activities can resume too, “but actually the opposite is true."

Global school studies suggest in-person learning can be safe when transmission rates in the larger community are low, the CDC report said.

Mississippi is among states where several outbreaks among students and teachers have been reported since in-person classes resumed in July and August.

Kathy Willard said she had mixed feelings when her grandson’s fourth grade class in Oxford was sent home for two weeks after several teachers and one student tested positive for the virus. The family doesn’t have internet access at home, making remote learning a challenge.

“It was a hardship. There’s always a worry about him falling behind or not getting access to what he needs for school,” Willard said. “But at the same time, I’m glad the school is doing what they can to protect our kids.”

Students in her district are required to wear masks and receive temperature checks, and students and teachers who come into contact with the virus are quarantined.

In Alcorn County, Mississippi, where hundreds of community cases have been reported, including dozens among teachers, staff and students, parent Kimberly Kilpatrick-Kelley is keeping her 15- and 17-olds home for virtual learning.

The Corinth mother said the family always wears masks when they leave home and practice social distancing, and she worries about her kids getting sick and infecting her parents.

“I personally don’t want to take the risk” she said.

Dr. Yvonne Maldonado, head of the American Academy of Pediatrics’ infectious-diseases committee, said the big question is what will happen as schools that have started out with online learning go back to in-person classes.

“It really will depend on how well can you mask and distance in a school setting,” she said.

The CDC report said more than 277,000 children ages 5 to 17 were confirmed infected between March and Sept. 19, with an increase in September after a peak and a decline over the summer.

The agency acknowledged that may be an underestimate, in part because testing is most often done on people with symptoms, and children with the coronavirus often have none.

The CDC reported 51 deaths in school-age kids, most in them ages 12 to 17. Less than 2% of infected children were hospitalized, and youngsters who are Black, Hispanic or have underlying conditions fared worse than white children.

In a separate report Tuesday, the CDC said weekly COVID-19 cases among people ages 18 to 22 increased 55% nationally. The increases were greatest in the Northeast and Midwest and were not solely attributable to increased testing, the CDC said. About one-third of U.S. cases are in adults 50 and older, while one-quarter are in 18-to-29-year-olds.

The AAP research is based on reports from public health departments in 49 states, New York City, Washington, D.C., Puerto Rico and Guam. New York state doesn’t provide data by age. Most states count children's cases up to age 19, though a few use different age ranges.

As of Monday, the CDC counted over 435,000 cases in children from age zero through 17 and 93 deaths. The groups’ totals differ because they include different ages and time periods.

Overall, 7 million Americans have been confirmed infected and 205,000 have died.