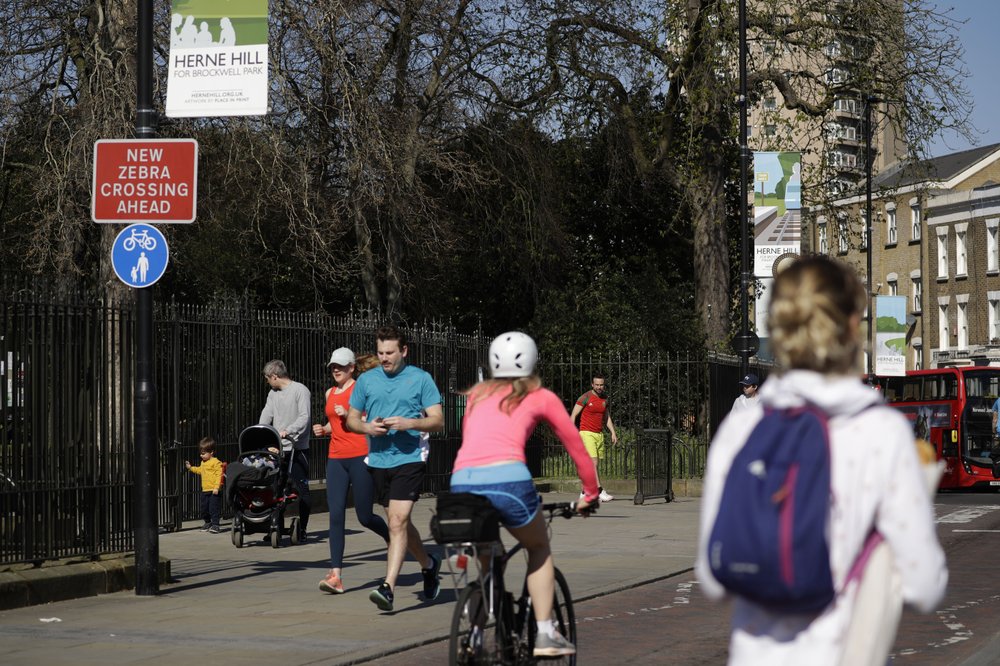 People observe social distancing as they pass by the locked gates to Brockwell Park in London, after it was closed overnight to help stop the spread of coronavirus, after the previous evening the local council announced via social media that the park would be shutting, after it said 3,000 people went there on Saturday many of them sunbathing and in large groups, April 5, 2020. (Photo: AP)

LONDON, April 6 (Xinhua) -- The death toll of those hospitalised in Britain who tested positive for the novel coronavirus reached 5,373 as of Sunday afternoon, a daily increase of 439, the Department of Health and Social Care said Monday.

Earlier in the day, a Downing Street spokesman confirmed that British Prime Minister Boris Johnson remains in hospital under observation but "in good spirits".

Johnson was admitted to hospital for "routine tests" on Sunday night, 10 days after testing positive for coronavirus.

"Last night, on the advice of my doctor, I went into hospital for some routine tests as I'm still experiencing coronavirus symptoms. I'm in good spirits and keeping in touch with my team, as we work together to fight this virus and keep everyone safe," Johnson said on Twitter Monday.

Johnson was admitted to hospital for tests, on the advice of his doctor, according to a statement from Downing Street.

This is a precautionary step, as the prime minister continues to have persistent symptoms of coronavirus 10 days after testing positive for the virus, said a Downing Street statement.

Chairing Monday's Downing Street daily press briefing, Foreign Secretary Dominic Raab, also First Secretary of State and the prime minister's de facto deputy, told reporters that Johnson remains in charge of the government and is being "kept abreast of all the relevant developments".

Talking about possible exit strategy of lock down measures, which has entered into its third week, Raab said the planning for the end of the lockdown was taking place, but warned that "the risk right now is if we take our focus off the strategy (social distancing), which is beginning to work, we won't get through this peak as soon as we want to."

Raab said the Foreign Office is helping to source ventilators from around the world while also trying to get stranded British citizens back from abroad.

The British government has helped more than 20,000 Britons get home from Spain since the start of the coronavirus pandemic, as well as 13,000 from Egypt and 8,000 from Indonesia, said Raab.