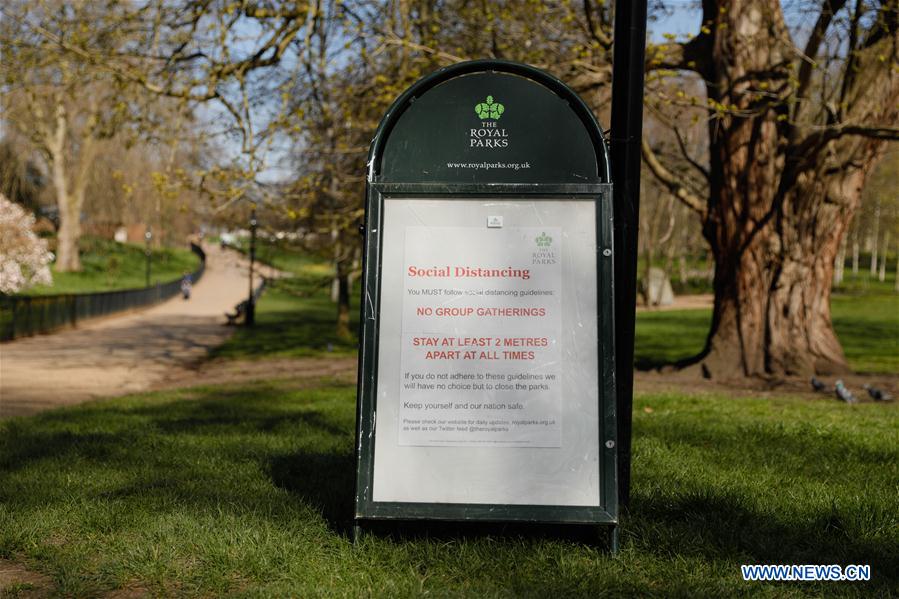 A sign encouraging social distancing is seen in Hyde Park after the British government placed further restrictions on movement in London, Britain on March 24, 2020. (Photo: Xinhua)

LONDON, April 8 (Xinhua) -- The death toll of those hospitalized in Britain who tested positive for the novel coronavirus reached 7,097 as of Tuesday afternoon, a record daily increase of 938 since the outbreak began, the Department of Health and Social Care said Wednesday.

"He has been sitting up in bed and engaging positively with the clinical team," said Sunak.

Johnson was admitted to St Thomas' Hospital in London with "persistent symptoms" on Sunday night, 10 days after testing positive for COVID-19. He was moved into intensive care on Monday night after his coronavirus symptoms worsened.

During the press briefing, Professor Angela McLean, deputy chief scientific adviser, said that the number of new COVID-19 cases is not accelerating out of control in Britain.

Only a slight increase in patients in critical care was witnessed over the past 24 hours, according to McLean.

Meanwhile, Sunak acknowledged that the coronavirus pandemic could have a "significant impact" on the British economy, revealing that there would be an emergency COBRA meeting on Thursday to discuss "the approach" to reviewing lockdown measures.

"I have been very honest that this will have a significant impact on our economy," he said, adding that the government had put in place "an enormous amount of support to help as many people as possible to get through this."

In a bid to curb the pandemic, the British government has ordered a ban on public gatherings of more than two people and the closure of shops selling non-essential goods during the lockdown.

Among other measures, the government has launched schemes with more than 330 billion pounds (409.3 billion dollars) of loans and guarantees to help firms keep operating amid the pandemic, promising to cover 80 percent of wages -- up to 2,500 pounds (3101 dollars) a month -- for employees who are unable to work during the pandemic.