Lines again stretch around blocks at some COVID-19 testing sites. Refrigerated mobile morgues are on order, and parts of Europe are re-tightening borders amid a winter spike in coronavirus infections. 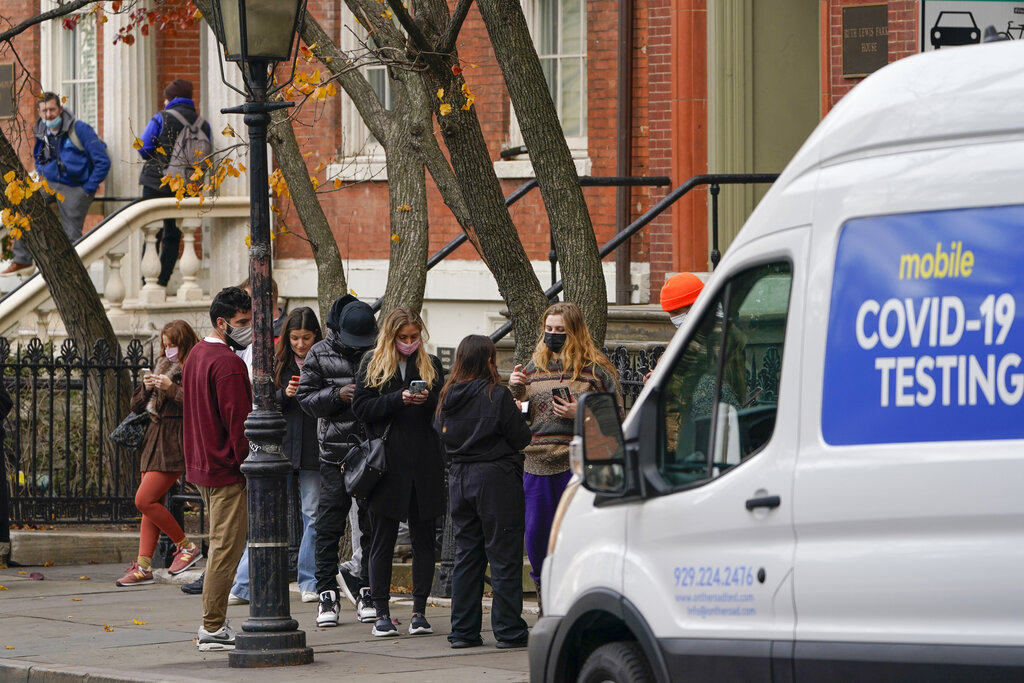 Pedestrians wait in line to get tested for COVID-19 at a mobile testing site near the NYU campus in New York, Thursday, Dec. 16, 2021. (Photo: AP)

This year's holiday season was supposed to be a do-over for last year's subdued celebrations. Instead it's turning into a redux of restrictions, cancellations and rising angst over the never-ending pandemic.

“This year, more than ever, everyone needed a holiday,” said John McNulty, owner of Thief, a Brooklyn bar that had to close for a day earlier this week because of an infected employee.

As Christmas and New Year's approach, a pall lingers over the season. Infections are soaring around the world, and the quickly spreading omicron variant has triggered new restrictions on travel and public gatherings reminiscent of the dark days of 2020.

The accelerating cancellations seem "to have thrown us back into that sort of zombie world of the first week of March of the pandemic last year,” said Jonathan Neame, the chief executive of Shepherd Neame, Britain’s oldest brewery and chain of pubs.

New York Mayor Bill de Blasio said Thursday that the city would “watch very carefully” whether to press ahead with plans to welcome a fully vaccinated crowd back to Times Square on New Year’s Eve, a celebration that was canceled last year. It’s a go for now, the mayor said.

Multiple Broadway shows, including “Hamilton,” “Mrs. Doubtfire” and “Harry Potter and the Cursed Child,” called off performances in recent days because of virus cases in their all-vaccinated casts and crews. California and New York brought back indoor mask mandates.

In Philadelphia, Health Commissioner Cheryl Bettigole urged residents not to go to indoor holiday parties, calling them “just too dangerous.” She ruefully advised against even getting together with other households for Christmas.

Many Americans have spent nearly two years on an emotional seesaw as the pandemic worsened and waned in cycles and the hoped-for return to normal was repeatedly pushed back. A recent poll by MTV Entertainment Group and The Associated Press-NORC Center for Public Affairs Research found that nearly half of American adults said the pandemic made it harder to maintain their mental health.

“I think for a large number of people, there was this hopefulness that this holiday season was going to be different. So if you went in with that expectation, and you weren’t adjusting it over the last couple of months, I think you’re going to be all the more disappointed,” said Dr. Vaile Wright, a clinical psychologist who works for the American Psychological Association.

Her advice? “Try to get to a place where the expectation is that this is going to continue on for a while, and if you’re feeling stuck, try to find ways to make your life meaningful right now.”

The world has been on edge over the omicron variant, which could become the dominant strain of coronavirus in weeks in many nations. Adding to that anxiety is the fact that hospitals in many U.S. states are already slammed with patients infected with the delta variant. The military and the National Guard have been enlisted to help at hospitals.

Refrigerated mobile morgues, a grim symbol of the early pandemic, are making a comeback. In Arizona, one county voted this week to spend $65,000 on a mobile morgue because virus deaths have far exceeded capacity. A hospital in Akron, Ohio, brought in a trailer to more than triple its morgue space, Cleveland television station WKYC reported.

Some people are striving to keep fears in check.

Yvonne Sidella, a “50-something” from Orwigsburg, Pennsylvania, views the steep rise in cases and the looming threat of omicron with equanimity. She does not plan to let it alter holiday plans that include spending time with her elderly parents, her four children and her eight grandchildren.

After last winter’s brutal COVID-19 surge forced him to skip his usual Christmas trip home to visit family and friends in the Midwest, Don Carlson booked plane tickets in September. The college administrator in San Francisco figured with vaccinations available and a lower number of infections, the trip to Minneapolis and Nebraska would be fine.

Soon after, hospitals started filing up in the Midwest. Then came the discovery of the omicron variant.

Carlson, 59, couldn’t in good conscience make the trip, so he canceled. He will stay in Northern California and get together with a few vaccinated friends for small dinners around the holiday. He plans to do Zoom calls with the friends and relatives he would have visited.

“It’s disappointing, but what would be far more disappointing is spreading it to an elderly person in your family because you went through airports,” Carlson said. “I think it’s just prudent to stay put.”

Dakota LeRoy, a 25-year-old product designer in Manhattan who is fully vaccinated, had reasoned that it would be safe to go to a Christmas-themed dive bar to celebrate a new job last week. But on Wednesday she found she was infected with COVID-19, after a scratchy throat and some sniffles prompted her to get tested before a holiday visit with her boyfriend’s family in Boston.

“Everyone I know is either positive or has been in direct contact with somebody who is,” she said.

April Burns, a bill collector for New York City, said things are far from being back to normal. But she considers the worst to be over.

“Last year, everybody was shut down. At least now, things are open, you know. You can get out more, and you still get to see people,” said Burns, who is unvaccinated and was standing in line Thursday near Wall Street to comply with city rules that require her to be tested weekly.