COVID-19 infections in Japan rise to 2,362, Abe says state of emergency not imminent 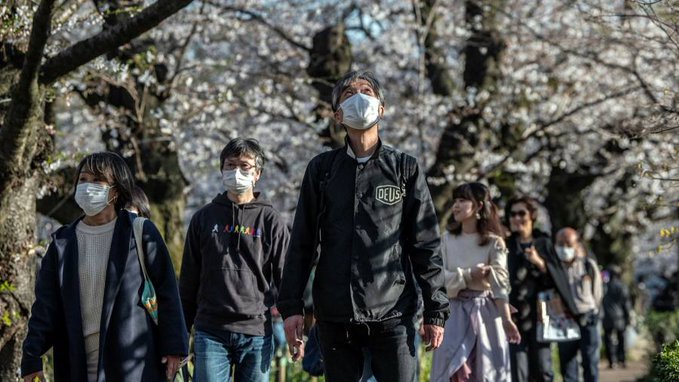 TOKYO, April 1 (Xinhua) -- Japan's health ministry and local governments said that 2,362 people have been infected with the COVID-19 virus in Japan as of 6:30 p.m. local time on Wednesday, with 66 new cases recorded in Tokyo, adding to pressure on the government to take further measures to curb the domestic spread of the virus.

The death toll in Japan from the pneumonia-causing virus currently stands at 78, according to the health ministry, with the figure including those from the virus-hit Diamond Princess cruise ship that was quarantined in Yokohama, close to Tokyo.

Of the 2,362 confirmed COVID-19 infections in Japan, the majority are in the capital city of Tokyo, which has now confirmed 587 cases.

Japanese Prime Minister Shinzo Abe on Wednesday said that the nation is not yet at a point where it is necessary to declare a state of emergency, although he told an upper house committee meeting on the matter that a decision would be made based on prioritizing people's lives and the health of the public.

While Tokyo Governor Koike Yuriko has urged Abe to decide whether to declare a state of emergency as cases in the capital continued to rise, the Japanese leader said that for the time being prefectural governors would be allowed to make requests of their citizens and give orders.

Koike previously said that Tokyo is "on the brink," and, as such, the central government needs to make up its mind about the declaration and issuing a potential lockdown.

Abe's latest remarks made in the upper house could still see Koike expand the restriction of people's movements in the capital, following her request last weekend for people to stay home and her ongoing call for people to work from home and refrain from going outside in the evenings.

As with Tokyo, Osaka Prefecture has identified nightclubs and other night spots as potential COVID-19 hotspots, with Yoshimura Hirofumi, the governor of Osaka saying the virus could spread rapidly in night spots that operate until early morning as customers stay in close quarters for relatively long periods of time.

He said the situation, if left unchecked, could lead to an "explosive spread" of cases of COVID-19.

The health ministry also said there are currently a total of 70 patients considered severely ill and are on ventilators to receive respiratory assistance or have been admitted to intensive care units for medical treatment.

The ministry added that in total, 1,091 people have been discharged from hospitals after their symptoms improved.