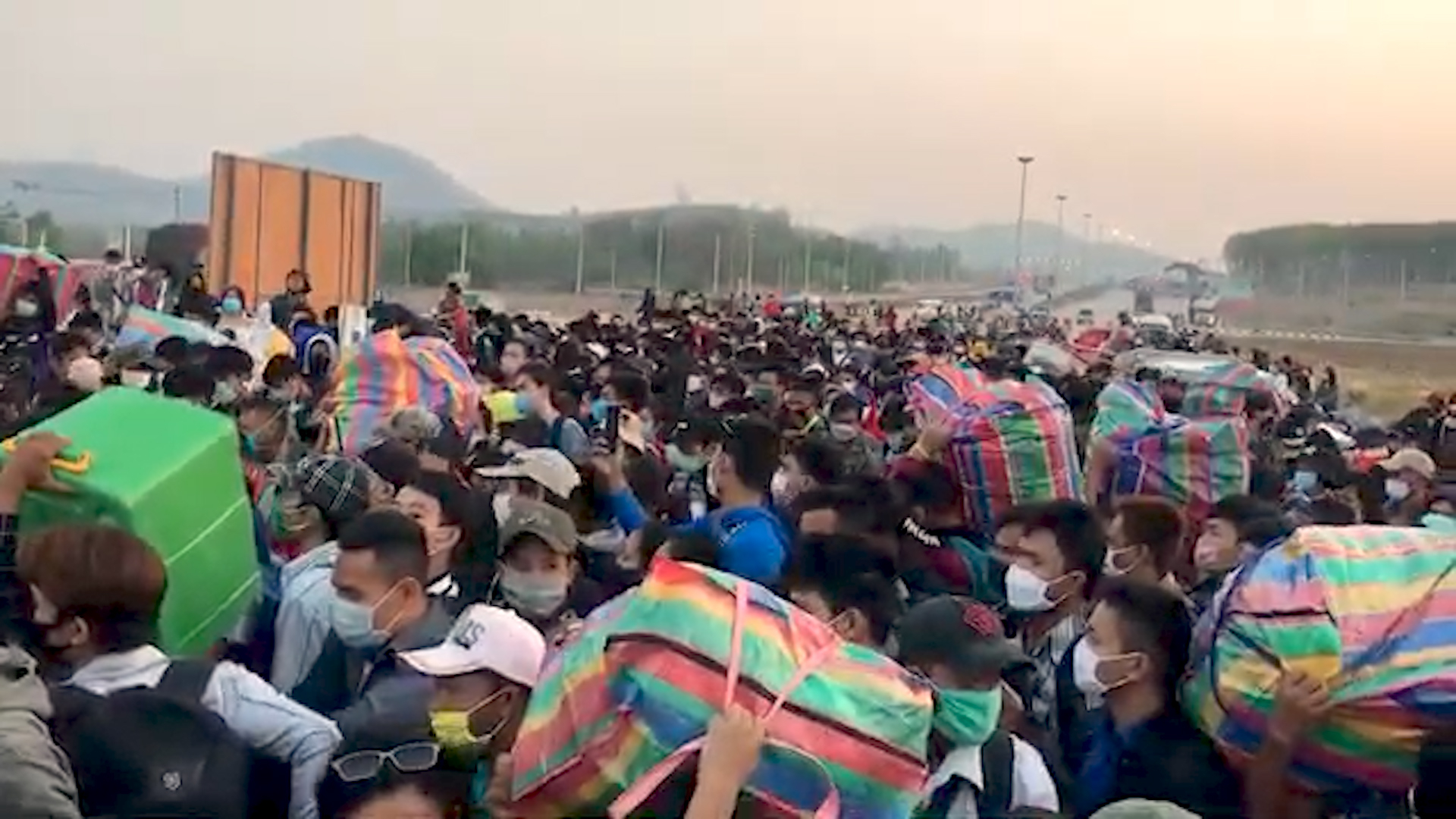 As a national lockdown was announced by the Thai Government, hundreds of thousands of migrant workers scrambled to return home to neighboring countries through border checkpoints, which are now closed, Mae Sot, Thailand, March 27, 2020. /International Organization for Migration. (Photo: CGTN)

The scenes played out at supermarkets around the world follow a similar pattern: Empty shelves, panic buying, long queues.

In Thailand, the government announced a lockdown in March. Hundreds of thousands of migrant workers returned home. Many act as a lifeline for the agricultural industry, which heavily depends on them for planting and harvesting, among other tasks. With borders still closed and fears of COVID-19 remaining, returning to Thailand, for now, is not an option.

The coronavirus pandemic has awakened wider fears about the security and strength of hugely complicated supply chains and logistics systems that modern societies depend on. Behind the scenes there are signs of strain on the way food is grown, made and delivered.

Thailand, Southeast Asia's second largest economy, hosts over four million migrant workers largely from neighboring countries. Agriculture is one of Thailand's most important industries; its continued growth has been dependent on migrant workers.

Unlike other sectors, agriculture is heavily affected by the timing of the lockdown rather than its duration because of the strict planting and harvesting calendar, which cannot be changed at will. If the planting season is missed, there could be no crop for the season or even for the entire year. The logistics to get food from field to plate are being increasingly affected and point to longer-term problems.

It's a major concern as agriculture in Thailand is highly competitive, diversified and specialized. The country boasts a hugely successful agricultural export industry that account for 9.9 percent of the GDP and 49 percent of the total labor force.

"In Thailand, many migrant workers working in the agriculture industry have gone back home," says Suttisak Rungrueangphasuk, manager of MAP Foundation. "If these workers can't get back to Thailand because of the situation, after a year, output will decrease dramatically."

For Chanon Sarngobjit, the lack of labor has become a challenge for him to carry out farm operations. He has 10 hectares of fruit farms, mainly durian and mangosteens. For many farmers like him, timing is everything: Harvest mangosteens just a few days late and the fruit cannot sell. With workers harder to find, this level of uncertainty has made it nearly impossible for Chanon to plan ahead.

"Most of our workers are from Cambodia and Myanmar," he says. "It's having an impact on us because many of them can not return. I have to call other farms to ask for their workers. Before this, I would have 20 workers ready to work."

Thailand is facing a double whammy: COVID-19 and severe drought. Both these factors have resulted in skyrocketing prices of staple crops. Thai rice prices have more than tripled since the beginning of the year. The price of vegetables and eggs have also increased.

Thailand's agricultural sector has long been called the country's "backbone." But that backbone is not made of steel. Each link of the global food supply chain is under immense pressure. Any disruption within a single link could cause the whole system to be at risk, where in developing countries, food shortages and price hikes may lead to severe food insecurity for already vulnerable populations.

For Thailand the priority is still the the drastic measures in response to the virus, not food scarcity – at least, not yet. According to local media, Thailand's National Security Council is now considering extending the national state of emergency. The council will present its proposal to Prime Minister Prayut Chan-o-cha, recommending the relaxation of some existing restrictions for some businesses and daily activities.