WORLD COVID-19 may have appeared in Italy earlier than thought: study

COVID-19 may have appeared in Italy earlier than thought: study 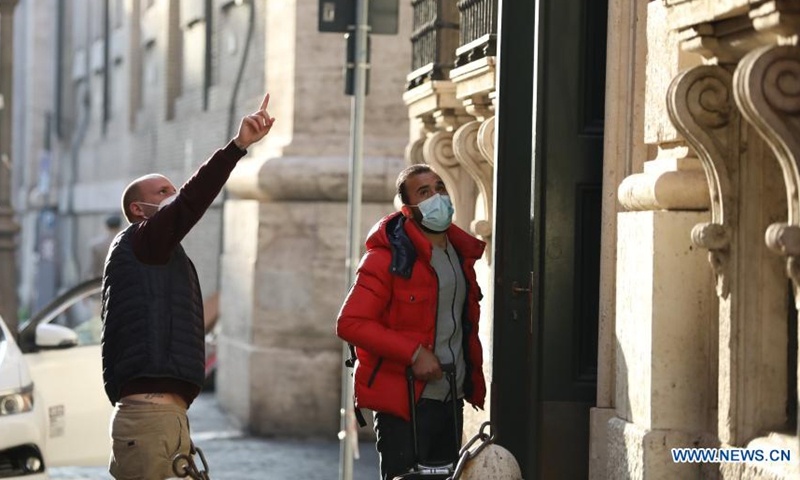 People wearing face masks talk on a street in Rome, Italy, Nov. 10, 2020. The COVID-19 cases in Italy exceeded one million on Wednesday, official statistics by the Health Ministry showed. Some 32,961 new cases were registered on a daily basis, which brought the country's total to 1,028,424 since the pandemic officially broke out here in late February. (Photo: Xinhua)

The coronavirus may have been circulating in Italy since September 2019, three months before it first emerged in China, according to a study released Sunday by the National Cancer Institute (INT) in Milan.

If true, it would mean that the virus was present in Italy three months before it was first reported in China in December 2019, and five months before the first official case was recorded in Italy on Feb. 21, 2019.

The INT research showed that 11.6 percent of the 959 healthy volunteers who participated in a lung cancer screening trial between September 2019 to March 2020 had developed COVID-19 antibodies well before February.

Giovanni Apolone, a co-author of the study, said that four cases from the study dated to the first week in October last year, which means those people had been infected in September.

The northern region of Lombardy, whose capital is Milan where the pandemic first emerged in late February, had previously reported an unusually high number of cases of severe flu and pneumonia in the last quarter of 2019 in a sign that COVID-19 may have circulated earlier than previously thought.