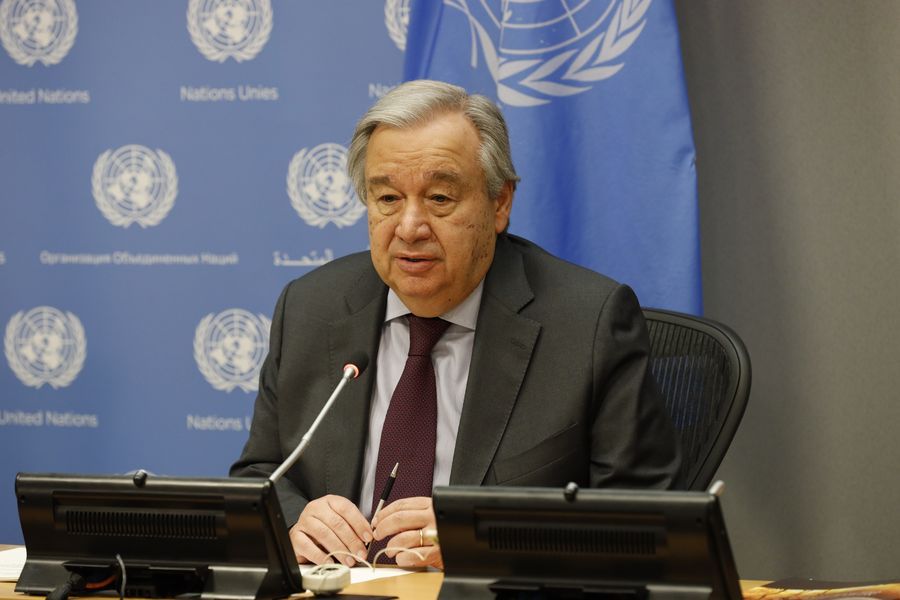 United Nations Secretary-General Antonio Guterres speaks at the launch of the World Meteorological Organization (WMO) Statement on the State of the Global Climate in 2019, at the UN headquarters in New York, on March 10, 2020. (Photo: Xinhua)

"COVID-19 is exposing the fragility of our world. Despite the enormous scientific and technological advances of recent decades, a microscopic virus has brought us to our knees," Guterres said in his video message to the Forum of Small States.

"But the fragility exposed by the virus is not limited to our health systems. It affects all areas of our world and our institutions," he said.

"The fragility of coordinated global efforts is highlighted by our failed response to the climate crisis. The fragility of our nuclear disarmament regime is shown by the ever-increasing risk of proliferation. The fragility of our web protocols is laid bare by constant breaches in cybersecurity, as cyber warfare is also already happening -- in a lawless international environment," the UN chief added.

"COVID-19 must be a wake-up call," he said. "It is time for an end to this hubris. Our deep feelings of powerlessness must lead to greater humility."

Speaking of the global response to the pandemic, the secretary-general said that "we have seen such a widespread and damaging spread of the pandemic in large part because our multilateral system is not strong enough." An airport authority worker pulls a consignment of medical equipment donation for COVID-19 that was donated by Jack Ma and Alibaba Foundations to Kenya, at Jomo Kenyatta International Airport in Nairobi, Kenya, March 24, 2020.

"In responding to COVID-19 and all our current global challenges -- from climate change to terrorism and disarmament -- we require unity and solidarity," Guterres said.

"Countries have adopted different strategies instead of a coherent international-led response. There is a real risk of a second wave," the secretary-general warned.

"And for that we need a strong, coordinated and coherent multilateral response based on solidarity. Unity can ensure that treatment and testing are universally available and that first responders and essential workers have adequate protection," the UN chief noted.

Guterres welcomed the debt relief initiatives by the Group of 20 (G20), while noting that the G20 debt moratorium "only covers the least developed countries." 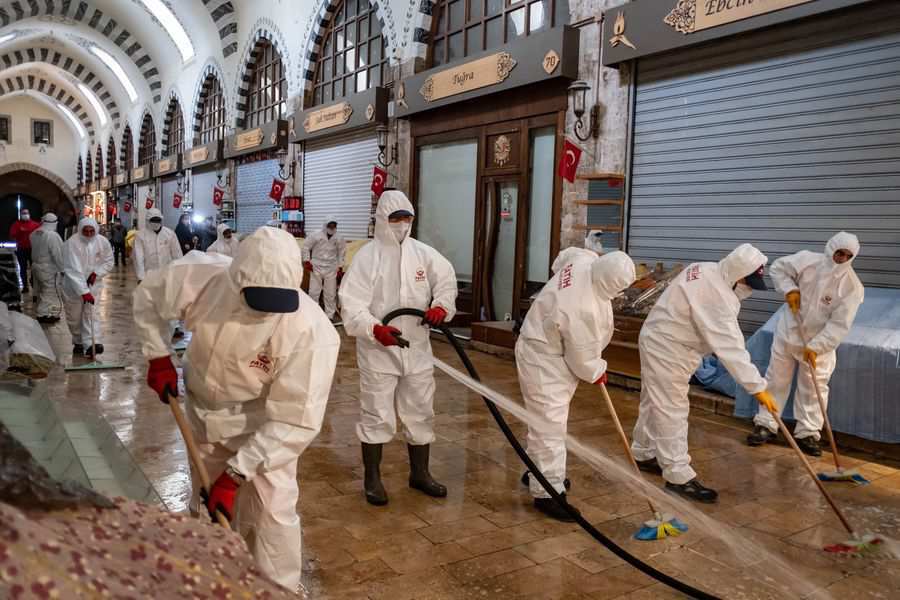 Municipal workers disinfect the Spice Bazaar in Istanbul, Turkey, May 28, 2020.

"Debt relief must be extended to all developing and middle-income countries that request forbearance because they have no access to financial markets," he said.

"Solidarity is also needed for building back better," he said, while noting that "returning to the systems that created the fragility of our current world is out of the question."

He said that during recent weeks, he has been arguing strongly that "all our efforts must go towards building more equal, inclusive, resilient and sustainable economies and societies."

"Strengthened multilateral cooperation is also essential in supporting economic recovery around the world," he said.

The UN chief called on the international community to "reject the influence of nationalism, xenophobia and racism and fight attempts to weaken multilateral institutions."

"We need to reaffirm the importance of international law and a rules-based global order. And we need a united Security Council to fully assume its responsibility as a guarantor of international peace and security," said the secretary-general.