WORLD COVID-19 spike in US ignites new mess in responses

COVID-19 spike in US ignites new mess in responses

WASHINGTON, Aug. 11 (Xinhua) -- The resurgence of COVID-19 in the United States, driven by the highly contagious Delta variant, is creating a new mess in the country's responses to the once-in-a-century pandemic that is rapidly straining its medical resources and health care system. 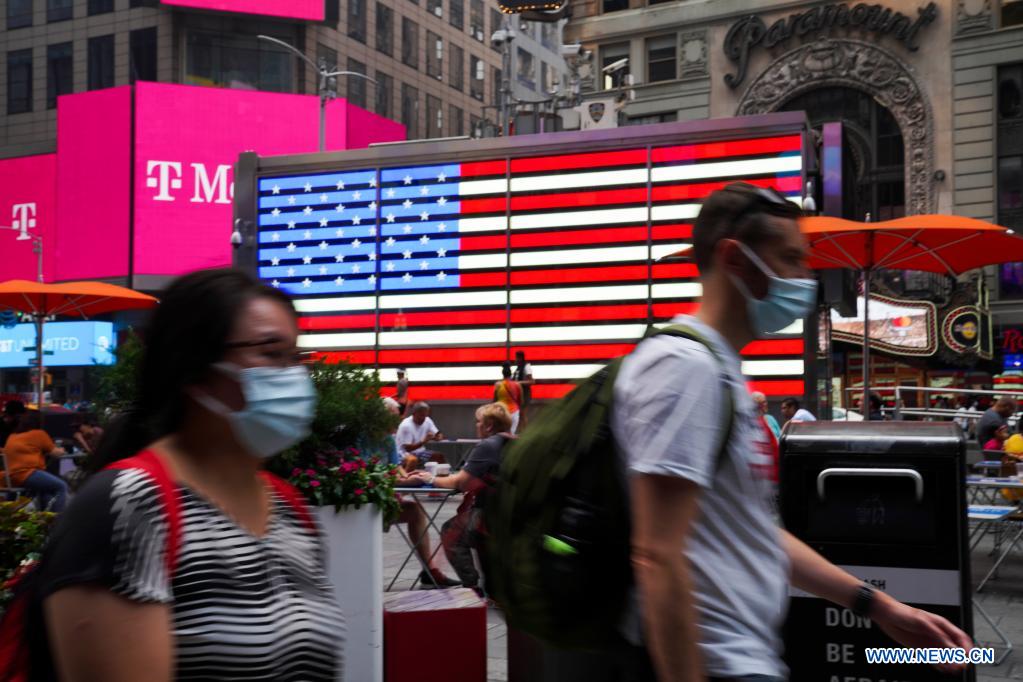 Some U.S. states, including Texas and Florida, are refusing to allow local authorities and school districts to reimpose mask mandates amid surging COVID-19 cases, as some Republican governors continue to push individual responsibilities over government mandate in managing the spread of the disease, which has led to a series of lawsuits.

Judge Clay Jenkins of Texas's populous Dallas County, who's suing Governor Greg Abbott over mask rules, said in a statement earlier this week that the enemy is not each other, but the virus.

"We must all do all that we can to protect public health," Jenkins said. "School districts and government closest to the people should make decisions on how best to keep students and others safe."

In Florida, several school districts are considering mask mandates, as schools are returning from summer break, despite an executive order by Governor Ron DeSantis that leaves it up to parents to decide whether their children wear face coverings on campus.

The governor's office has responded by threatening to withhold the salaries of superintendents and school board members who disregard the order.

Former U.S. Surgeon General Jerome Adams said earlier this week that he feels it is "deeply troubling" that the country is "letting politics get in the way" of protecting public health, especially that of young people.

"As a father, I quite frankly think it's unconscionable. I really do," Adams told "CBS This Morning" during an interview.

U.S. President Joe Biden told reporters at the White House on Tuesday that he doesn't think he could intervene in states that have banned mask mandates but added that his administration was studying the possibility.

Most states and jurisdictions in the United States are experiencing substantial or high levels of community transmission fueled by the spread of the Delta variant, according to the latest COVID-19 data tracker weekly review published by the U.S. Centers for Disease Control and Prevention (CDC).

The United States is now averaging more than 100,000 new COVID-19 cases a day, the highest since February, with both hospitalizations and deaths going up, figures showed. The CDC is projecting that a total of 630,000 to 662,000 COVID-19 deaths will be reported by early September in the country.

Several states, including Florida, Arkansas, Louisiana, and Oregon, were reported to have had more people hospitalized with COVID-19 than at any other point throughout the public health crisis, while nursing staffs are badly strained.

In the state of Oklahoma, rural hospitals are reportedly having increased difficulty finding places to monitor and treat ICU patients.

"We're in the middle of a bed crisis," Carlos Cabrera, a doctor at a hospital in Shawnee, Oklahoma, told a local news outlet. "We've tried pretty much every hospital in Oklahoma -- in Oklahoma City and in Tulsa -- there are just no ICU beds."

Amid growing concerns about the Delta variant, U.S. officials and health experts have been actively encouraging people to get vaccinated against COVID-19, which the CDC has recently said remains "the best tool" to protect them from the disease, but some media outlets and politicians continue to sow doubt about vaccines in order to appeal to their bases.

U.S. Congresswoman Marjorie Taylor Greene, a Georgia Republican, has recently been suspended from Twitter for sharing misinformation about COVID-19, after posting that the country's Food and Drug Administration (FDA) "should not approve" COVID vaccines. She also falsely claimed that "vaccines are failing and do not reduce the spread of the virus and neither do masks."

A Twitter spokesperson said that Greene's tweet was flagged for misinformation and that her account will be in read-only mode for a week "due to repeated violations."

Tom Frieden, a former CDC director, tweeted that the COVID-19 surge in the United States "is being driven primarily by people who haven't yet been vaccinated."

More than a dozen large U.S. corporations have recently announced vaccine mandates for their employees. California has become the first state in the country to require all teachers and school staff to get vaccinated or receive weekly COVID-19 testing.

In his new book, Scott Gottlieb, former FDA commissioner, analyzed how COVID-19 was able to trounce pandemic preparations in the United States.

"A system-wide failure across government institutions left the nation blind to the threat, and unable to mount an effective response," an online introduction of the book read. "We'd prepared for the wrong virus. We failed to identify the contagion early enough and became overly reliant on costly and sometimes divisive tactics that couldn't fully slow the spread."

"We never considered asymptomatic transmission and we assumed people would follow public health guidance. Key bureaucracies like the CDC (Centers for Disease Control and Prevention) were hidebound and outmatched. Weak leadership aggravated these woes," it added.

Rick Bright, former director of the Biomedical Advanced Research and Development Authority, a U.S. Department of Health and Human Services office, said on Wednesday that many lives would have been saved if the federal government "had listened to the science."

"If we had initiated testing, a really robust nationwide testing strategy to tell people where the virus was and tell people who were infected, if we had done more to prepare for the vaccine administration rollout when the vaccine became available, we could have saved hundreds of thousands of lives of our loved ones and relatives and others in our community," Bright told CNN during an interview.

Frieden urged the United States to learn the lessons of this pandemic and strengthen public health in the country and globally.

"If we don't rise to the challenge, we'll continue to be just as vulnerable to the next pandemic," he tweeted.