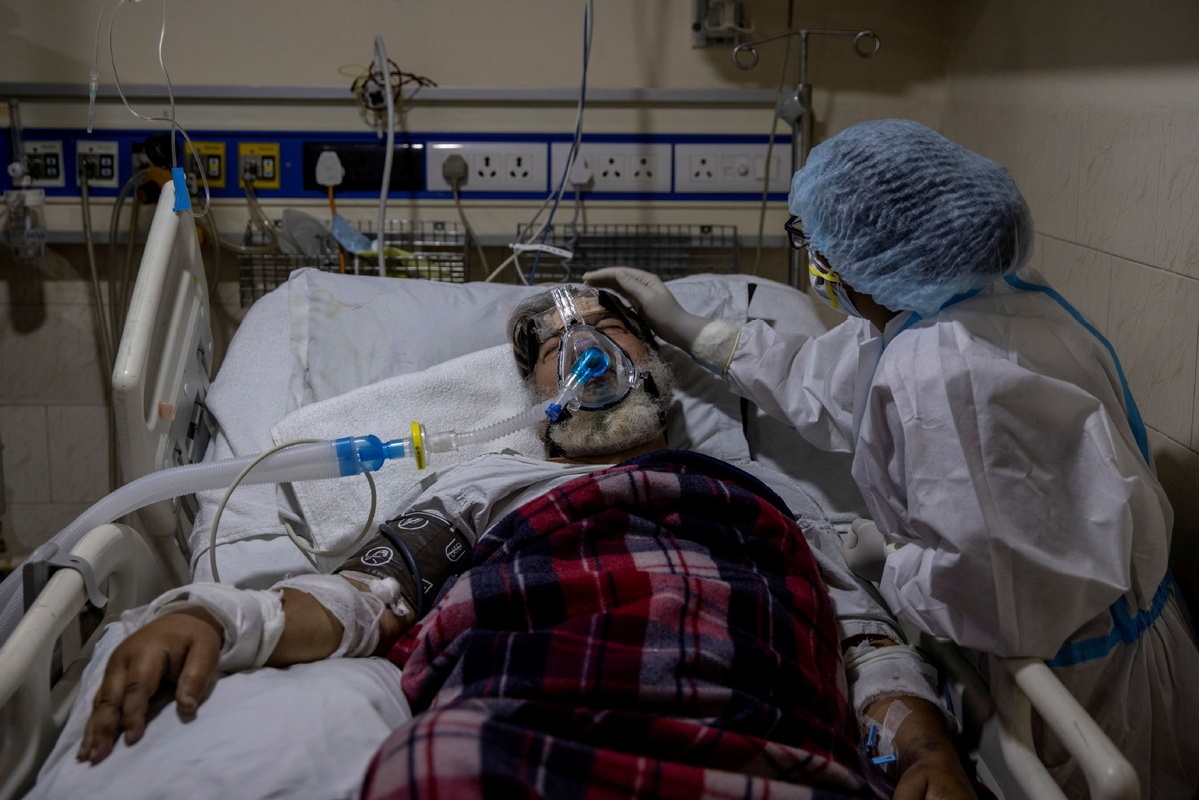 A medical worker tends to a patient suffering from the coronavirus disease (COVID-19), inside the ICU ward at a hospital in New Delhi, India, April 29, 2021.(Photo: agencies)

In the small suburban town of Shyamnagar near India's eastern metropolis of Kolkata, Doctor Pradip Bhattacharya was seen as someone with "magical abilities" – someone who could pull the dying back to life.

Many locals looked up to him as a "living God" as he was imbued with extraordinary compassion and empathy for his fellow citizens, especially the poor.

But all that is just a memory now. In August 2020, Bhattacharya, a 57-year-old general practitioner and the father of a 15-year-old girl, died of COVID-19, becoming another victim among India's healthcare workers to fall prey to the virus.

More than nine months since his passing, Bhattacharya's family and admirers are yet to come to terms with the doctor's death, which came after a 28-day battle in a hospital.

"He cared very little for his own comfort or life. His main concern was his fellow beings —their safety and wellbeing — especially the poor," recalled Bratati, the wife of the late doctor.

Bhattacharya was among one of the early victims of the dreaded virus among the medical community in India. Vaccines were not available at that time.

But how do we explain the case of an 81-year-old Indian American doctor, Rajendra Kapila, who had received two Pfizer vaccine doses in the United States before he headed for his family home at Ghaziabad near Delhi in March this year and died weeks later?

There is no ready answer.

All we know is that soon after arriving in India, Kapila, who was considered a "giant in the field of infectious diseases", got infected, and three weeks later he breathed his last in a Delhi hospital.

Then there was the heart-breaking news of a young doctor at Delhi's GTB Hospital.

Anas Mujahid, 26, died from acute COVID-19 complications, all of a sudden. Everything happened in a space of a few hours between May 8-9, and India lost a "shy, sweet and bright doctor".

Until the afternoon on May 8, Mujahid manned the obstetrics-gynaecology ward at the hospital before he started feeling unwell. By 3 am the following day, it was all over.

"It's heart-breaking. He served many COVID-19patients. He (is) a martyr," Satendra Singh, a doctor who teaches at the Delhi-based University College of Medical Sciences, was quoted by Indian Express newspaper as saying.

For Rashmi Khandelwal, a 40-year gynecologist in Kolkata, the battle lasted a little longer. She was on life support for more than a week until the end came on May 28. It was learnt that Khandelwal avoided taking vaccine because she had allergies.

Bhattacharya, Kapila, Mujahid and Khandewal are among the hundreds of medics that India has lost to the pandemic. More than 1,200 healthcare professionals have fallen victim to the coronavirus in the past 15 months.

They include at least 513 doctors who have died since April this year, according to J.A. Jayalal, national president of the Indian Medical Association. The victims include more than 30 doctors aged between 25 and 35 years.

In Delhi, the number of COVID-19 deaths of medics in the pandemic's brutal second wave is over 100, the highest in the country.

The national capital saw a massive surge in COVID cases and deaths in April. With at least 96 doctors' deaths, Bihar state comes second, according to the IMA.

The figures are bound to be higher because the IMA tracks only 350,000 member medics. The total number of doctors in India is close to 1.2 million. The country also has six million nurses and other healthcare personnel.

Kunal Sarkar, director and head of cardiac surgery at Medica Superspecialty Hospital in Kolkata, said part of the reason for the rise in COVID-related deaths of doctors is that many of them are yet to get themselves inoculated.

"It appears that a majority of the doctors who died in the second wave hadn't taken vaccine," Sarkar said, adding that the actual number of doctors' deaths must be higher than what the IMA figures show.

"I don't know how we describe this refusal to take the vaccines. Adventurism? Over-confidence? Denial? Defiance? Foolishness? Or sheer ignorance? Whatever the reason may be, the refusal to be vaccinated is proving very costly, not only to their own families, but to the nation as well," Debabrata Mitra, a practising medic, said.

IMA chief Jayalal described the deaths of doctors as an irreparable loss to the nation. "Had all of them taken the vaccines, most of them could have been saved," he said.

"Although the second wave is relatively under control at the moment, frontline medical workers continue to be vulnerable," said Jayalal, who is a surgeon.

Ashis Mukherjee, head of the psychiatry department at NRS Medical College, said many doctors and nurses are suffering breakdowns, with some becoming nervous wrecks, due to the stress.

"Long working hours, high density of patients, lack of time for any kind of limb-loosening, leave alone entertainment, are causing stress, ennui and dehydration, taking a heavy toll on the body and mind," Mukherjee said.

"We have started providing counseling services. Their families need counselling too," he said.

IMA chief Jayalal makes a strong pitch for boosting government spending on healthcare to resolve various problems in the sector.

"Budgetary allocation must be increased for overhauling healthcare infrastructure," he said.

According to the World Bank, India's total healthcare spending comes to about 3.5 percent of the nation's GDP, less than half of the global average.