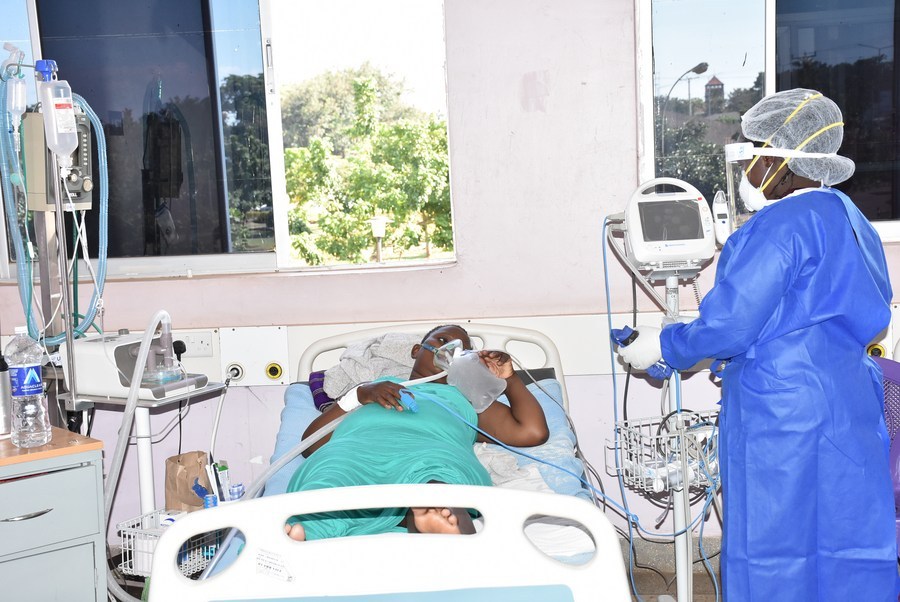 The third wave of COVID-19 is spreading at an alarming rate in Africa, with hospitals in three countries---Democratic Republic of Congo, Uganda and Zambia---already overwhelmed with patients, warned the Africa Centers for Disease Control and Prevention.

"The third wave peak is brutal and swift... and remarkably higher than the second wave. It has come in with a severity that most countries were not prepared for. In Zambia, it took three to four weeks for the country to be overwhelmed," John Nkengasong, the director of Africa CDC, said.

"This is the first time we are beginning to see countries report that their hospitals are completely overwhelmed."

So far, 20 countries across Africa are in the middle of the COVID-19 third wave, according to Nkengasong.

On June 12, DR Congo's President Felix Tshisekedi said hospitals in the country's capital Kinshasa had been overwhelmed by a rise in COVID-19 infections.

Following the surging infection cases, the country reimposed stricter COVID-19 restrictions, including limiting gatherings to 20 people, and a night curfew between 10 pm and 4 am. Incoming travelers are required to provide a proof of a negative COVID-19 test, taken at most 72 hours before arrival.

Uganda on the other hand, reimposed a 42-day lockdown on June 19. During the period, all schools, learning institutions, places of worship and sports events will remain closed. A nationwide curfew starting from 7 pm to 5:30 am will also be observed.

All cross-boundary district and intradistrict movement of public and private transport was also suspended for 42 days.

According to the World Health Organization, as of June 20, Africa had recorded around 474,000 new cases, a 21 percent increase compared with the first 48 days of the second wave.

Judging from the current rate of infections, the WHO projects that the ongoing surge will surpass the previous one by early July.

The UN agency attributes the new surge to a combination of factors including weak observance of public health measures, increased social interaction and movement as well as the spread of variants.

In the DR Congo and Uganda that are experiencing COVID-19 resurgences, the delta variant, first identified in India, has been detected in most samples sequenced in the past month. Across Africa, the variant has been reported in 14 countries.

"The third wave is picking up speed, spreading faster, hitting harder. With rapidly rising case numbers and increasing reports of serious illness, the latest surge threatens to be Africa's worst yet," Matshidiso Moeti, the WHO regional director for Africa, said on Thursday during a news briefing.

"Africa can still blunt the impact of these fast-rising infections, but the window of opportunity is closing. Everyone everywhere can do their bit by taking precautions to prevent transmission."

Nkengasong urged AU member states to continue implementing the adapted strategy that was endorsed by the African ministers of health on May 8, underpinned by enhanced approaches to prevent, monitor and treat.

He also expressed need for the continent to desperately scale up vaccinations. He assured Africans that vaccines are safe including the mRNA-based ones.

"I respect people's concerns when it comes to new technology. The mRNA will not impact your DNA because that is where the concern is, that it gets into the code where the genetic material is. If I got a chance to take Pfizer and Moderna vaccines that are based on mRNA, I will take without any concern," Nkengasong said.

The COVID-19 upsurge comes as the vaccine supply crunch persists. Eighteen African countries have used over 80 percent of their COVAX vaccine supplies, with eight having exhausted their stocks.

So far, just over 1 percent of Africa's population has been fully vaccinated. Globally, around 2.7 billion doses have been administered, of which just under 1.5 percent have been in the continent.