WORLD COVID-19 to have serious impact on US military’s global influence: Chinese experts

COVID-19 to have serious impact on US military’s global influence: Chinese experts 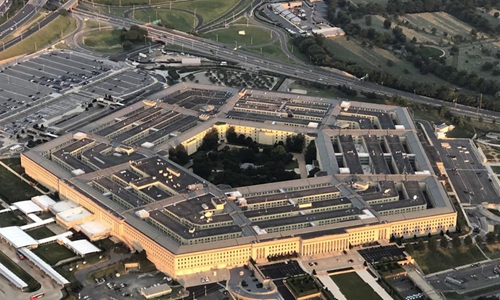 The Pentagon is seen from an airplane over Washington D.C., the United States, on July 11, 2018. (Photo: Xinhua)

Esper said on Monday that the disease has forced the US military to cancel some training exercises, and the virus could affect its readiness to conduct combat missions if it worsens, USA Today reported on Monday.

This is the first time the Pentagon has admitted that COVID-19 could potentially hit the US military's combat readiness, although Esper insisted that this will not impact its ability to fulfill its missions in the US and abroad.

As of Monday, the Pentagon reported 243 confirmed COVID-19 cases within the US Department of Defense, with 133 cases being active-duty military personnel, CNBC reported.

In comparison with the data from previous days, it is obvious that the US military is seeing a rapid increase in COVID-19 cases, which is in line with the increasing trend of infections in the US overall.

These measures will inevitably impact the US' combat readiness, analysts said.

The US military has had to stop regular military deployment adjustments across the globe, cancel or postpone joint exercises with its allies, and scale down or abandon its own training, which will deal a huge blow to the US military's combat readiness, Song Zhongping, a Chinese military expert and TV commentator, told the Global Times on Tuesday.

Since the US military follows a global deployment strategy, the COVID-19 pandemic will have the biggest impact on its combat readiness, Song said, noting that the US has military bases around the world to exercise its international influence, but now the strategy has backfired and many of its troops must stay where they are and cannot interact with its allies as frequently.

In the long term, this will reduce the US military's influence among its allies, Song said, adding that the epidemic has exposed the fact that the US military's capability in situations other than war is actually low, and its allies, particularly NATO members, have not been able to receive support from the US.