COVID-19 vaccines donated by China shipped from Beijing to Ecuador

By Bai Yunyi and | Global Times

The latest batch of 200,000 doses of Sinovac vaccines donated by China to Ecuador was shipped from a refrigerated storage facility near Daxing airport in Beijing early Wednesday. The consignment is expected to arrive in Ecuador on Saturday. 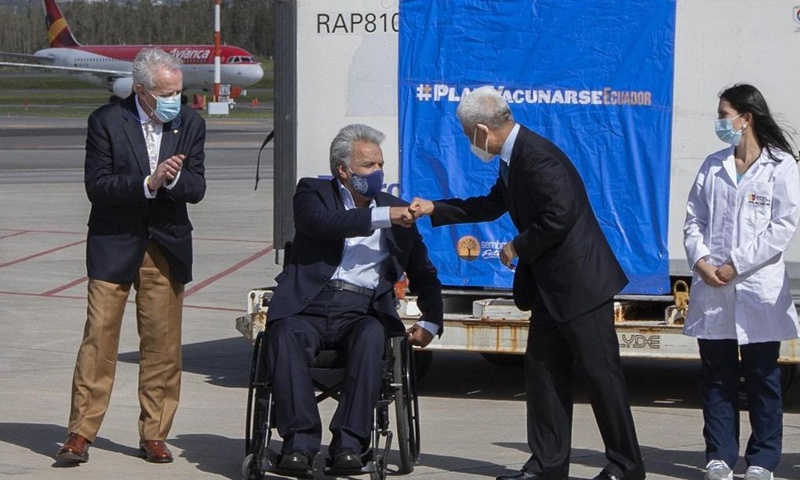 The ambassador of Ecuador to China, Carlos Humberto Larrea Dávila, signed the donation certificate at the site while reaffirming his strong confidence on the quality and safety of Chinese vaccines.

China is the backbone of the Ecuador's vaccination program and its efforts to provide vaccines to many developing countries around the world should be a "model for the international community," Carlos Humberto Larrea Dávila told the Global Times.

The Ecuadorian government had previously signed an agreement with Sinovac for the purchase of 2 million doses of COVID-19 vaccine. The first and second batches of vaccine arrived in the country on April 7 and 10, media reported.

Ecuador is also in talks with China to buy an additional 7 million doses of coronavirus vaccine, according to the ambassador, who said they are interested not only in buying Sinovac's vaccine but also from other producers.

Some Western media have long been accusing China of "vaccine diplomacy" to pursue geopolitical and economic interests in Latin America by exporting or donating COVID-19 vaccines to the region. "On the contrary, China's vaccine exports to Latin American countries are based on bilateral relations and cooperation. China has been promoting the worldwide accessibility and affordability of COVID-19 vaccines so that there will be no barriers to trade," said the ambassador.

Over the concerns about the safety and efficacy of Chinese vaccines, ambassador Larrea suggested that Ecuador's health department held a rigorous assessment on it based on a scientific verification of its effectiveness.

"The quality of Chinese vaccines is very high," he said, stressing that the vaccine was approved by many countries as well as the World Health Organization (WHO). "Ecuador believes it has made the right choice," he added.

The ambassador mentioned that the department of health of Ecuador scrutinizes the importation of Chinese vaccines and has fully proved the effectiveness, and high quality of the vaccines. Many countries have approved the vaccine made in China and endorsed by the WHO.

"China is now the world's largest exporter of vaccines, especially for many developing countries. We are most moved by the fact that, although China has its own mandate to vaccinate 1.4 billion people, it still distributes some of its vaccines to other countries with similar needs. So, we are very grateful to the Chinese government," said the Ecuadorian ambassador, adding that "China should be an example for the international community."