COVID-19 variant first identified in India found in 44 countries, resistant to antibodies: WHO

GENEVA, May 12 (Xinhua) -- A COVID-19 variant first identified in India has been found in 44 countries with a possible presence in five more, and is believed to be resistant to certain antibodies, including from vaccines, the World Health Organization (WHO) said Wednesday. 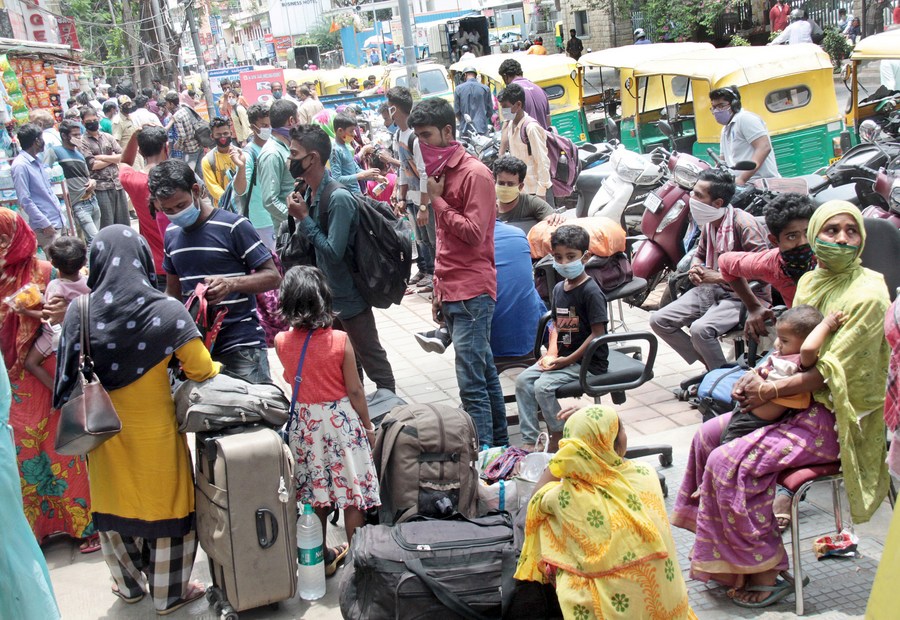 Indian migrant workers and their families are seen outside the bus transport booking center during the coronavirus pandemic, in Bangalore, India, April, 15, 2021. India's COVID-19 surge continued as a fresh high of 200,739 new cases were registered on the day. (Str/Xinhua)

The variant, named B1617 and informally dubbed the "double mutant," has three different sub-lineages, B1617.1, B1617.2 and B1617.3, which were being found increasingly in other countries, especially in Europe and North America, the WHO said in its weekly update.

The B1617 was declared as a variant of concern on Monday by the WHO.

In India, which reported more than 2.7 million cases last week, sub-lineages B1617.1 and B1617.2 were found respectively in 21 percent and 7 percent of all samples, the WHO said in the update.

Britain reported the second highest number of B1617 cases, and has already declared sub-lineage B1617.2 as a variant of concern, it said.

According to the update, sub-lineages B1617.1 and B1617.2 showed to be resistant to antibody Bamlanivimab used for COVID-19 treatment, as well as "reduced susceptibility to neutralization antibodies" for B1617.1.

The WHO added that the variant might also be resistant to vaccines, as a study reported sevenfold reduced effectiveness against antibodies released by Moderna and Pfizer vaccines.

Although the variant might be responsible for the surge of cases in India, a country which accounts for 50 percent of all global cases and 30 percent of deaths worldwide, many other factors could explain the outbreak, such as religious and political mass gatherings, as well as a lack of adherence to such measures as social distancing, the WHO said.