WORLD COVID origins tracing must stop being politicized and return to reason and science: Jeffrey Sachs

COVID origins tracing must stop being politicized and return to reason and science: Jeffrey Sachs 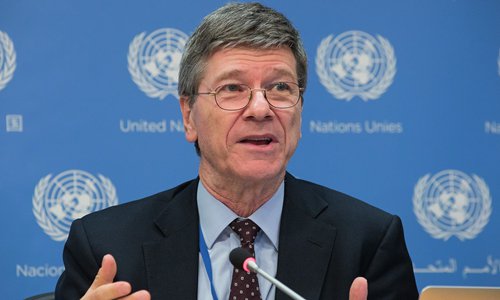 The only legitimate goal of the novel coronavirus origins tracing should be "to understand SARS-CoV-2 and work cooperatively together to end the pandemic and to prevent future pandemics," said Jeffrey Sachs, a professor of economics at Columbia University in New York and head of the Lancet COVID-19 Commission. Sachs believes that the origins tracing should not become a geopolitical issue. He also suggests that the US "be transparent about the kinds of research underway on dangerous viruses in order to assess biosafety standards and to protect against laboratory-related spillovers." The following is the full transcript between the Global Times and Professor Sachs in a written interview regarding the virus' origins tracing.

GT: Recently, Washington has launched a series of offensives against Beijing over the origins of the coronavirus. Will the virus origins tracing become the most important point of frictions between China and the US in the following year to come? What are the actual goals that the US government hopes to achieve? Can those goals be achieved?

Sachs: There is only one legitimate goal here: to understand SARS-CoV-2 and work cooperatively together to end the pandemic and to prevent future pandemics. For this we need cooperation among scientists and among governments.

GT: President Biden ordered the US intelligence community to intensify its efforts to study the origins of coronavirus. What's your take on the US' ordering intelligence agencies to investigate a scientific problem that scientists should be responsible for? Does the Biden administration attempt to exonerate itself? Or is it seeking to mobilize the US society to support its anti-China campaign? Or are there any other considerations at work here?

Sachs: The origin of SARS-CoV-2 remains unknown. It is very likely that this virus emerged from horseshoe bats, but how it infected human beings is not known. There are two main hypotheses. The first is a natural spillover, meaning that SARS-CoV-2 was transmitted by bats to humans, or by bats to an intermediate mammal to humans, in a natural occurrence. The second is a research-related spillover, in which the virus emerged in the course of research on SARS-like viruses. This could have happened if a fieldworker studying bats accidentally became infected in the field. Or it could have happened if a virus under study in a laboratory somehow escaped the laboratory.

Both hypotheses are possible. There is nothing in the genetics of SARS-CoV-2 to rule out either hypothesis.

The US and China were studying SARS-like viruses in scientific partnerships of US and Chinese scientists. This joint research was taking place in US laboratories and at the Wuhan Institute of Virology. It therefore makes no sense for the US to cast blame on China. If by any chance there was indeed a research-related spillover, it may well have happened in the course of US-funded research.

The US and China should work cooperatively together and with the global scientific community to examine all possibilities of the origin of SARS-CoV-2. If an accident occurred, this is not a matter of blame from one side or the other. The research itself was a scientific collaboration by the two countries. This should not become a geopolitical issue, but a matter of cooperative problem solving.

GT: The WHO expert team arrived in Wuhan for a four-week investigation into the origins of the virus. For future origins tracing investigations, some scholars, such as Singaporean political scientist Kishore Mahbubani, believe other countries, especially the US, should also declare that they are willing to allow WHO teams to access any facilities on their soil. What's your take on this issue?

Sachs: Yes, this is correct. There was considerable research in both the US and China on SARS-like viruses, and this research, much of which was US-funded with US-Chinese collaboration, should be examined to see what light it sheds on the origins of the spillover.

GT: Currently, more than 25 million Chinese netizens have signed a petition demanding an investigation into the Fort Detrick in the US. There have been reports of many problems inside Fort Detrick - the base was closed in 2019 due to security issues and the mysterious e-cigarette-caused lung disease emerged afterwards. It's also where dangerous virus studies are conducted. Can these provide enough information for the WHO to initiate an investigation of Fort Detrick? In your opinion, why has such investigation not been carried out yet?

Sachs: The US should be transparent about the kinds of research underway on dangerous viruses in order to assess biosafety standards and to protect against laboratory-related spillovers. All governments engaged in research on dangerous viruses should be transparent about the risks and should reassess biosafety standards. This is not to say that COVID-19 resulted from a laboratory-related spillover - we just don't know. It is to say, however, that transparency and biosafety are important in their own right.

GT: You said in a recent article that the real issue about COVID-19 origins is how to prevent future pandemics based on international cooperation, instead of blaming or acquitting some countries. In your opinion, who are the people that are politicizing the issue? What consequences will they bring to the world by politicizing the origins tracing?

Sachs: We urgently need close cooperation between the US and China on many issues, including steps to stop the pandemic (e.g., through global vaccine distribution), economic recovery, and global sustainable development. The US Government and senior politicians should stop trying to blame China for global problems. Instead, we should usher in a new era of cooperation. Both countries have much to offer to the world - if the two countries work together and work for the global good.