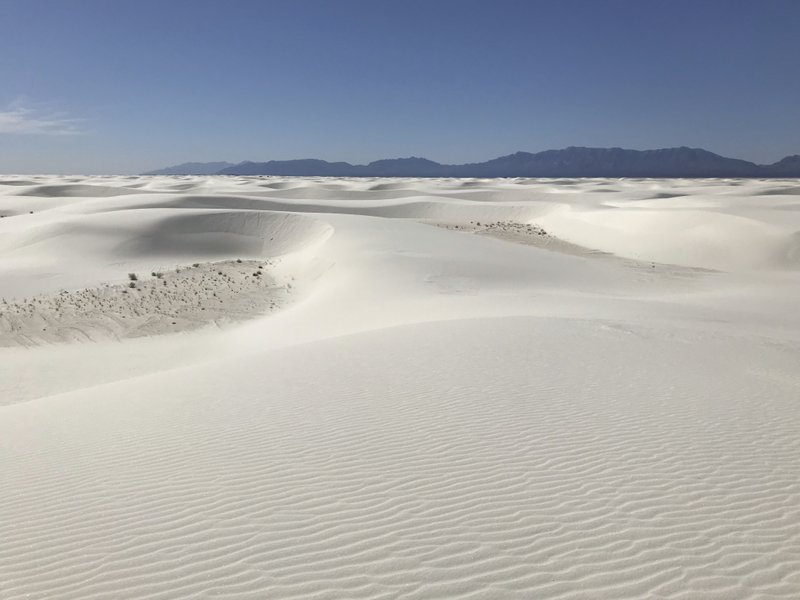 Iconic gypsum sand that the group Cowboys for Trump had said was from White Sands National Monument in New Mexico and was sent to Washington for the US Capitol Tree lighting ceremony this week was actually gathered just outside the monument, one of the group’s co-founders said Friday.

The group had caused a political furor after announcing it sent the sand because it’s illegal to remove sand from the park — and Democrats said the group might have violated federal law.

But Otero County Commission Chairman and Cowboys for Trump co-founder Couy Griffin told The Associated Press the group collected its four “big plastic bins” of extremely fine, pure white sand from outside the monument’s perimeter for delivery to Wednesday’s tree lighting ceremony after getting permission from the New Mexico Department of Transportation.

Cowboys for Trump members in social media posts and in videos had said that the “white sand was from White Sand National Monument.” Griffin repeated the claim in a Nov. 30 Facebook video. But he said in the interview Friday that his earlier statement was not accurate.

“It’s not like I drove onto the monument to collect sand. We got permission from the state Department of Transportation, who collected it for us,” Griffin said.

New Mexico Department of Transportation spokeswoman Marisa Maez did not know if the agency gave Cowboys for Trump permission to take sand or if the agency collected sand for the group. In an email, she said once the white sand blows across the highway from the monument and into the agency’s right of way, it becomes the department’s property.

“At that point, the sand is also considered ‘contaminated’ and cannot be placed back at the monument,” she said. “It then becomes a safety issue when someone wants to collect the sand on the side of the road.”

Griffin said he also reached out to state Sen. William Burt, a Republican, for help in getting permission to take the sand. Wind and weather regularly blows the gypsum sands inside and outside the monument.

The transported sand was given as a gift to New Mexico’s congressional delegation so it could be showcased with the tree. The tree is a large blue spruce from the Carson National Forest in northern New Mexico.

Griffin said the group scrapped plans to leave the sand under the tree and instead invited attendees at Washington social events to take small bags of it. The group also presented sand to all members of the Democratic US Congressional delegation as a gesture of what it called bipartisanship and to promote New Mexico, Griffin said.

Removing natural resources from US national parks units, including national monuments, is illegal without permission.

“Federal laws and policies prohibit the taking of sand and any resource from within the national monument,” White Sands National Monument tweeted from its official account after Griffin posted videos about the sand on social media. “The illegal taking of resources from within the national monument is a Class B misdemeanor punishable with a $5,000 fine or six months in jail.”

After Cowboys for Trump posted videos about transporting the sand, the Democratic Party of New Mexico accused the group of violating federal law.

“Cowboys for Trump and Couy Griffin are prioritizing a publicity stunt over the well-being of one of New Mexico’s most incredible natural areas,” the state party spokeswoman Miranda van Dijk said in a statement. “By stealing from a National Monument, they’re disrespecting the law and damaging efforts to preserve White Sands for future generations of New Mexicans.

In an interview with Albuquerque-based KOB-TV in Washington on Wednesday after the tree was lit, Democratic Gov. Michelle Lujan Grisham mentioned the sand while talking about ornaments and other tokens representing New Mexico. Lujan Grisham spokesman Tripp Stelnicki confirmed Friday that governor was given a gift of sand by the group.

“The governor would not have accepted the gift had she known or suspected it was taken improperly,” Stelnicki said. “She gets handed a lot of things.”

Griffin traveled to Washington in part to attend a Sept. 12 conference with representatives from western states. A travel voucher listed a meeting with President Donald Trump as the reason for the expense.