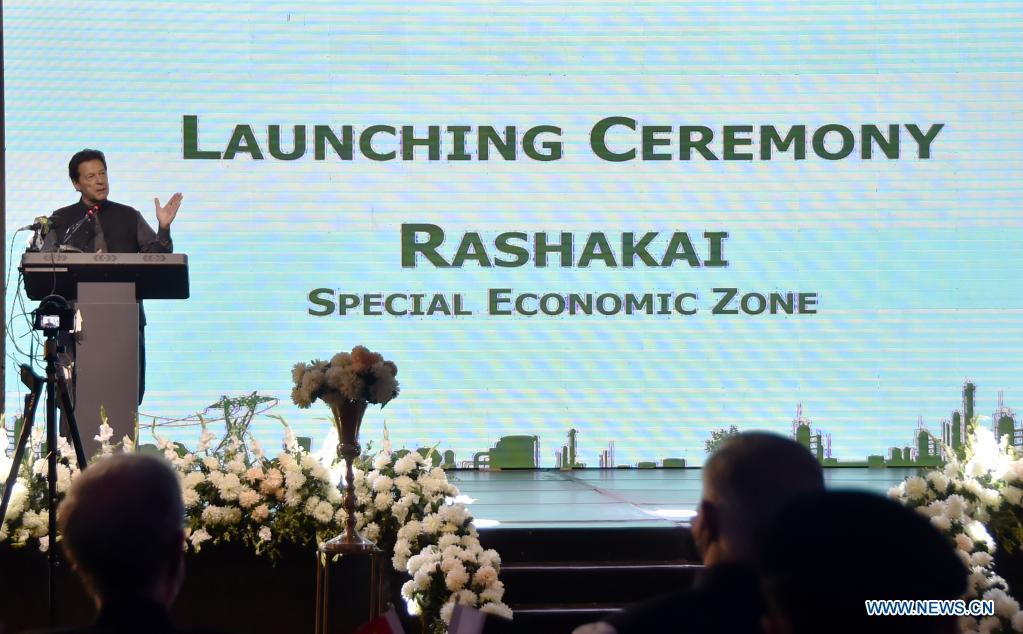 ISLAMABAD, May 28 (Xinhua) -- Pakistani Prime Minister Imran Khan said on Friday that the special economic zones (SEZs) under the China-Pakistan Economic Corridor (CPEC) will promote industrialization of his country and uplift its economy.

Addressing the commercial launching ceremony of the Rashakai SEZ under the CPEC in the country's northwest Khyber Pakhtunkhwa (KP) province, Khan said that the Rashakai and other SEZs will help increase Pakistan's exports, which will eventually facilitate wealth creation.

"Industrialization is the future of Pakistan, and wealth creation in a country cannot be done without industry. It is a very good thing that the Rashakai SEZ is being developed with cooperation of China," he said, adding that his country can learn a lot from China, a country which has developed its industry during the last few decades with a great pace, to speed up the industrialization process.

The Pakistani prime minister said that Pakistan will follow China's example to increase its exports and his government will facilitate investors through one-window operation in the Rashakai SEZ to help them do business easily.

"We are giving incentives to the SEZs to attract foreign investors and our local investors for kicking off export-oriented industrialization process in Pakistan," he added.

On the occasion, Chinese Ambassador to Pakistan Nong Rong said that the cooperation between China and Pakistan to develop industrial parks is crucial for the high-quality development of the CPEC.

The Chinese envoy said that the strategic location of KP province gives the Rashakai SEZ great potential for developing export-orientated industries targeting Central Asia and for the industries to meet the domestic market demand, adding that China will continue to work closely with Pakistan in developing the Rashakai SEZ.

The Rashakai SEZ, covering about 1,000 acres of land, is being developed jointly by the China Road and Bridge Corporation and the Khyber Pakhtunkhwa Economic Zones Development and Management Company in three phases. At present, the construction and investment attraction work of the Rashakai SEZ is in progress.

According to the Prime Minister Office of Pakistan, the Rashakai SEZ is expected to create 200,000 direct and indirect jobs, as well as attracting a large number of foreign investment.