GABORONE, Sept. 5 (Xinhua) -- Prolonged and crippling drought is threatening to wipe out over 38, 000 livestock, hippos in the northwestern part of Botswana, as over twenty animals are dying every week. 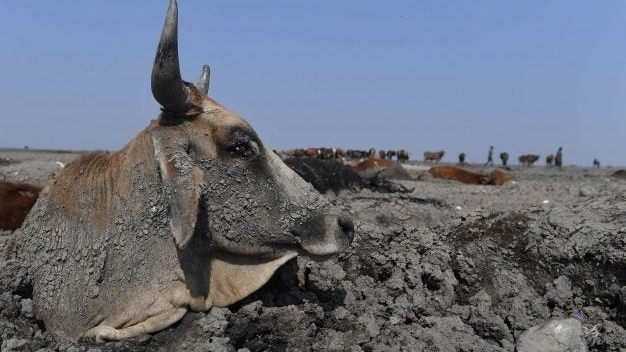 Cattle wallow in the mud due to drought in the Lake Ngami on August 29, 100km away from Maun, Botswana. The state declared this year as drought year. Lake Ngami is an Endorheic basin in Botswana north of the Kalahari Desert. (File photo: AFP)

Thato Raphaka, the permanent secretary in the Ministry of Environment and Wildlife, made the shocking revelation Wednesday night when addressing journalists in Gaborone, Botswana's capital city.

"Around 38, 000 livestock depend on the waters of Lake Ngami but the animals have been stricken by a crippling drought, " said Raphaka.

According to Raphaka, the livestock is being trapped by the mire. The livestock, mostly cattle and goats, are dying every day while trying to make their way across the mire.

He said the farmers have to walk long distances in hopes of taking their animals to better places where they can find anything to eat.

"Some succumb to the heat and vultures can be seen feasting on their corpses in the sludge of the drying lake," he said.

In May this year, President of Botswana, Mokgweetsi Masisi officially declared Botswana to be in drought after months of unevenly distributed rains, heat waves and dry spells.