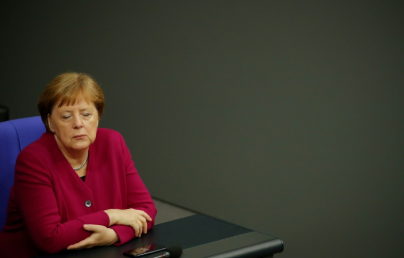 Parties in German Chancellor Angela Merkel's government were locked in separate crisis talks on Monday, after her fragile coalition suffered a fresh body blow as the leader of junior partner SPD quit.

The 48-year-old's decision left the SPD in disarray, and raised questions over the survival of Merkel's coalition.

Whether the unhappy partnership between Merkel's centre-right CDU-CSU alliance and the centre-left SPD can go on until the end of its term in 2021 could now hinge on Nahles' successor.

Anxious to calm the jitters over her government, Merkel said on Sunday that it would press on and fulfil its mandate.

"What I want to say for the government is that we will continue with our work with all seriousness and with great responsibility," the veteran leader said in a statement.

The leadership crisis at the SPD could not have come at a worse time for Merkel's CDU, which was itself struggling to halt a haemorrhage of voters as the younger generation shuns it in droves for the Greens.

Voices are growing louder within the coalition for the parties to part ways.

Harald Christ of the SPD's business leaders forum said "Nahles stands for the existence of the GroKo -- whose stability is now in question." 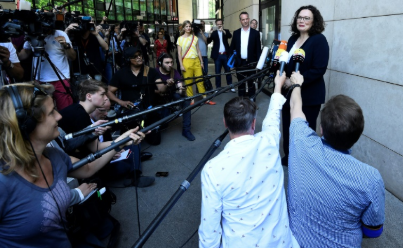 "In my view what comes next is the end of the GroKo -- everything else leads nowhere," he told Bild daily, using the German shortform for grand coalition.

The deputy leader of the CDU-CSU parliamentary group, Carsten Linnemann, also warned in an interview with RedaktionsNetzwerk Deutschland newspaper group that "if we are unable to progress with the SPD, then we should draw a line under this and ask ourselves if continuing with the GroKo still makes sense."

But other voices pleaded for more time for the coalition to deliver on its pledges and win back disillusioned voters with policy gains.

A leading SPD centrist, Johannes Kahrs, pointed to a plan to push through a climate protection law before the next elections, saying that "the people can, should and will measure us by this."

The alliance between Merkel's Christian Democrats and the SPD was fragile from the start.

Wounded by an election rout in 2017, the SPD had initially sought to go into opposition, but was reluctantly coaxed into renewing a partnership with Merkel.

Many within the party however remained wary of continuing to govern in Merkel's shadow, and the coalition has lurched from crisis to crisis.

The SPD, Germany's oldest party, had initially planned to re-examine the alliance in the autumn -- half-way through the four-year mandate.

But with a free-fall in its ratings unending, the SPD's timetable may yet be accelerated.

After last Sunday's European election, the SPD has been staring at the prospect of another debacle in three upcoming state polls in Saxony, Brandenburg and Thueringia, where the far-right AfD is poised to make significant gains.

With its anti-immigration campaign, the AfD in 2017 drew voters angry with Merkel's decision to let in more than a million asylum seekers into Germany.

But it is now the Greens which may have become the biggest headache for the SPD.

While sharing the centre-left position on the political spectrum, the Greens are proving more attractive to young voters because of their environmental platform.

In a national survey released Saturday, the Greens came in top for the first time -- enjoying slightly more support than Merkel's CDU-CSU alliance. The environmentalist party had a lead over the SPD of around 15 percentage points.