WORLD Criticizing populism, Britain's May has Brexit advice for successor

Criticizing populism, Britain's May has Brexit advice for successor

UK Prime Minister Theresa May launched a broadside against populism on Wednesday, using a valedictory speech to encourage her successor to embrace compromise to secure Britain's exit from the European Union. 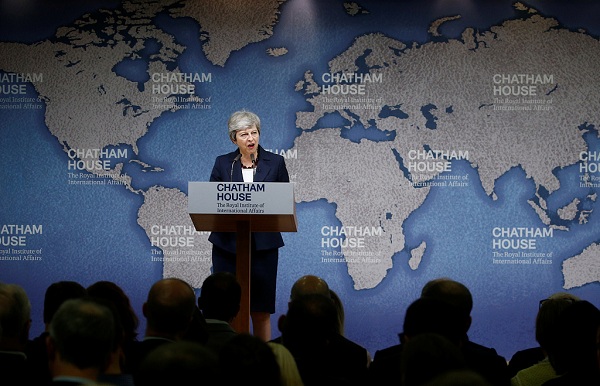 With only a few days left in power, the 62-year-old May railed against the coarsening of politics in what her audience took to be words aimed at Britain's probable next leader Boris Johnson or U.S. President Donald Trump.

While she said her words were not directed at anyone in particular, May used her last major speech as prime minister to set out why she felt her pragmatic approach to politics held more promise than what she called a tendency toward absolutism.

Aware she will be remembered as the prime minister who failed to deliver Brexit, May listed among her achievements a tough stance against Russian President Vladimir Putin after the Salisbury nerve agent attack and an ambitious new climate goal.

Acknowledging she had "no greater regret" than failing to deliver her Brexit deal - rejected three times by Britain's divided parliament - May said she had been trying to reunite a nation divided by the 2016 referendum.

"Whatever path we take must be sustainable for the long-term – so that delivering Brexit brings our country back together. That has to mean some kind of compromise," she said at international affairs think tank Chatham House.

"The problem was that when it came time for parliament to ratify the deal, our politics retreated back into its binary pre-referendum positions – a winner takes all approach to leaving or remaining. And when opinions have become polarized – and driven by ideology - it becomes incredibly hard for a compromise to become a rallying point." 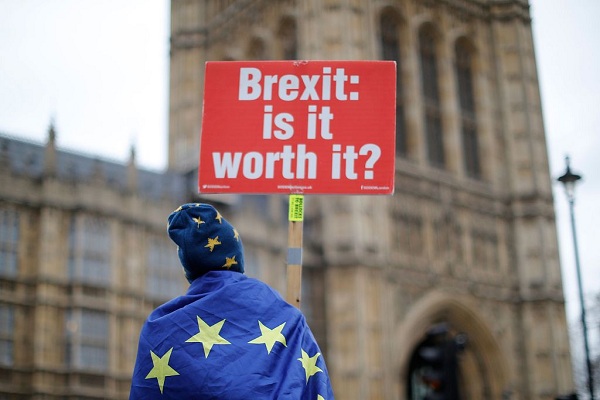 Anti-Brexit supporters hold placards and flags as they demonstrate outside the Houses of Parliament on January 14, 2019. (File Photo: VCG)

Her words came days after Johnson, and his rival for May's job, foreign minister Jeremy Hunt, hardened their positions on Brexit, saying a major part of the agreement with the bloc had to be jettisoned before they could sign up.

While she acknowledged she made mistakes, she did not address critics who say it was her own lack of compromise and inability to bridge lawmakers' differences that sunk the Brexit deal.

May will leave her Downing Street official residence in seven days time, making way for a new prime minister, which bookmakers bet will be Johnson, a leader of the Brexit campaign, who has promised to take Britain out of the EU on October 31.

She pointedly described her politics as being driven by "getting things done rather than simply getting them said".

"Today, an inability to combine principles with pragmatism and make a compromise when required seems to have driven our whole political discourse down the wrong path," she added.

"It has led to what is in effect a form of 'absolutism' - one which believes that if you simply assert your view loud enough and long enough you will get your way in the end ... This is coarsening our public debate."