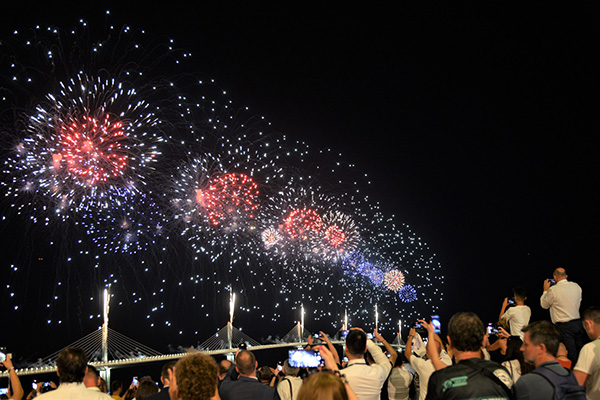 Fireworks are seen during the inauguration ceremony of the Peljesac Bridge in Komarna, Croatia, July 26, 2022. Croatia's Chinese-built Peljesac Bridge opened on July 26 for transport in the village of Komarna, connecting the two parts of the country's coastline for the first time. (Photos: Xinhua)

KOMARNA, Croatia, July 27 (Xinhua) -- Croatia's Chinese-built Peljesac Bridge opened Tuesday for transport in the village of Komarna, connecting the two parts of the country's coastline for the first time.

Addressing the ceremony, Plenkovic said it was "a historic day" for Croatia.

"We are happy that we realized a project that is truly national, strategic, all-Croatian and supra-party. We are proud to be a part of the generation that achieved such a great feat -- joining the Croatian territory," he said.

It is also the largest infrastructure project undertaken by the Chinese side in Croatia, illustrating the strong cooperation between China and Europe, Qi told local media.

Qi said that a Chinese consortium led by China Road and Bridge Corporation has overcome the adverse impact of the COVID-19 pandemic and completed the project on schedule.

Thousands of visitors attended the opening ceremony featuring traditional songs and folk dances, a boat procession and a fireworks display.

Owing to the new bridge, the two parts of the Croatian coastline are connected for the first time in the country's modern history, which represents a fulfillment of the decades-long aspiration of Croatians to achieve territorial continuity.

The total length of the cable-stayed bridge with six pylons and steel box girders is 2.4 kilometers. The Chinese consortium won the bid to build the Peljesac Bridge and its access roads in 2018.

A total of 18 design and consulting enterprises and 45 construction companies in the EU, and 112 global equipment and material suppliers participated in the project.