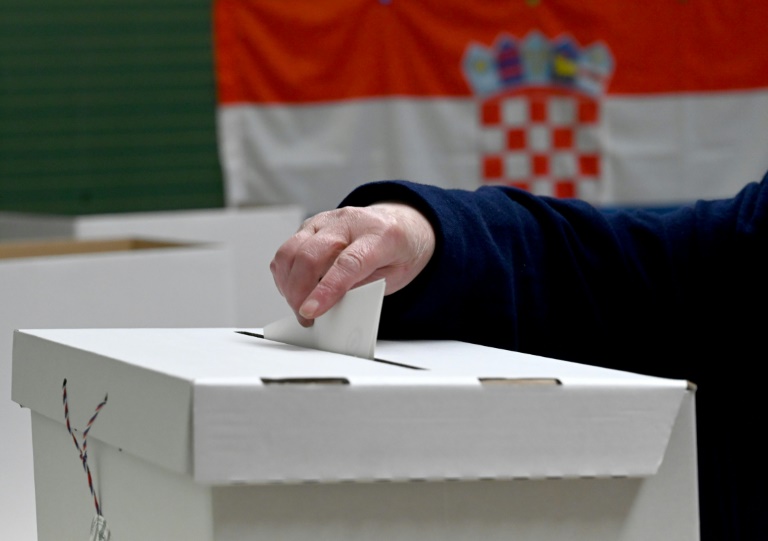 Turnout in Croatia's presidential election seems to be higher than in the last vote five years ago. (Photo: AFP)

Croatians went to the polls Sunday in a presidential election that could weaken the ruling conservatives just as the country takes the helm of the European Union's rotating presidency.

The pre-Christmas election, likely to be decided in a January 5 run-off, has evolved into a tight race between conservative incumbent Kolinda Grabar-Kitarovic and front-running rivals on the right and the left.

As she cast her own vote at a polling station in the capital Zagreb, 51-year-old Grabar-Kitarovic insisted that "every vote is important... in order that Croatia can be better and move forward."

At 1030 GMT, four and half hours after voting started, turnout was nearly 16 percent, the electoral commission said, just over two percentage points higher than in the previous election in 2014.

One voter, Mihajlo Glodovic, in his 60s, was among those who braved heavy rain.

"I fulfil my duty (to vote) but without big expectations," he told AFP, complaining that politics-related issues had become an "empty folklore".

Grabar-Kitarovic has been president, a role with limited powers, since 2015.

She is backed by HDZ, the centre-right party that has led Croatia for most of its independence since 1991.

The country's first female president has often wavered between representing the party's moderates and pandering to its nationalist faction.

In her re-election bid, she is struggling to hold on to hardliners shifting to a right-wing folk-singer turned politician, Miroslav Skoro.

Playing on an emotive symbol of the 1990s independence war, Grabar-Kitarovic held her final campaign rally Friday in eastern Vukovar, the town whose bloody siege by Serb forces became a byword for Croatian suffering during the conflict.

She told the crowd she believed those who fought and died in the war "don't regret being killed since Croatia is (now) here".

The comments were seen as an effort to burnish her nationalist credentials in the battle with Skoro, who has been wooing the far-right with promises to deploy troops to halt migrants at the borders and pardon a convicted war criminal.

Skoro, 57, who is running as an independent and was polling in third place in the run-up to election day, urged the electorate to "do everything to return Croatia to the people" as he cast his own vote.

Meanwhile, the split on the right has carved out a space for leftist former premier Zoran Milanovic, 53, to gain traction. He was running neck-and-neck with Grabar-Kitarovic in the latest opinion polls.

Milanovic, in a bid to encourage poeple to vote, warned Sunday that "bad presidents are voted by good people who decide to stay at home".

Prime minister from 2011 to 2016, Milanovic was previously derided for his arrogance but is trying to make a comeback with promise to make Croatia a "normal" country with an independent judiciary and respect for minorities.

Analysts say a loss for Grabar-Kitarovic would deliver a blow to HDZ Prime Minister Andrej Plenkovic, a moderate in the party, ahead of parliamentary elections next year.

Starting on January 1, his government will be tasked with hosting the EU's rotating presidency for a six-month term, with thorny issues like Brexit and the Western Balkans' membership bids on the agenda.

Matija Horvat, a 27-year-old economist preparing to vote in Zagreb, said he was disappointed with a campaign that focused on the past instead of the future.

"They stole the space for issues of vital importance for most people's lives, including the young who are leaving in increasing numbers," he said reflecting the view of many Croatians.

The government has struggled to halt an emigration exodus as huge numbers of Croatians pack their bags for better pay and professional opportunities in wealthier member states.

Many who leave also cite a culture of nepotism and corruption at home, plus poor public services, as key motivations.

The presidential campaign has however been light on policy ideas with many candidates instead attacking each other with war-era grievances.

A total of 3.8 million people are eligible to vote.

Initial results are expected from 1900 GMT or two hours after the voting ends.