Residents of Omis, a Croatian town in the south of the country, are angered at a tunnel that leads off the edge of a cliff, as reported by the BBC.

Construction halted on the 1,471-meter tunnel through the mountain as it waits for a bridge and an additional tunnel to be built. The tunnel was supposed to link to an existing bypass and relieve road congestion to the town.

"This is all fun for them, maybe they think Batman is up there," said Frane, a resident of Omis, to the TV station RTL Croatia.

Another resident, Ante, added, "This junction is the worst in Omis, but there is no money - nothing can be done."

Croatian taxpayers have spent 300 million kuna (about $44 million) on this “important infrastructure project” that launched six years ago to make it more convenient for Omis residents to get to the main coastal road. The TV station RTL Croatia reported that now “everything has stopped” and the money is now being spent elsewhere.

Public mockery increases, and the RTL reported that the town's authorities said that the expensive project "is shameful".

The town's mayor, Ivo Tomasovic, told RTL that they expected “a public tender” for the project after the summer holidays ended and the project would resume next year. 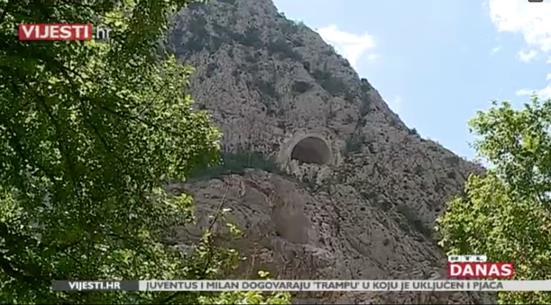