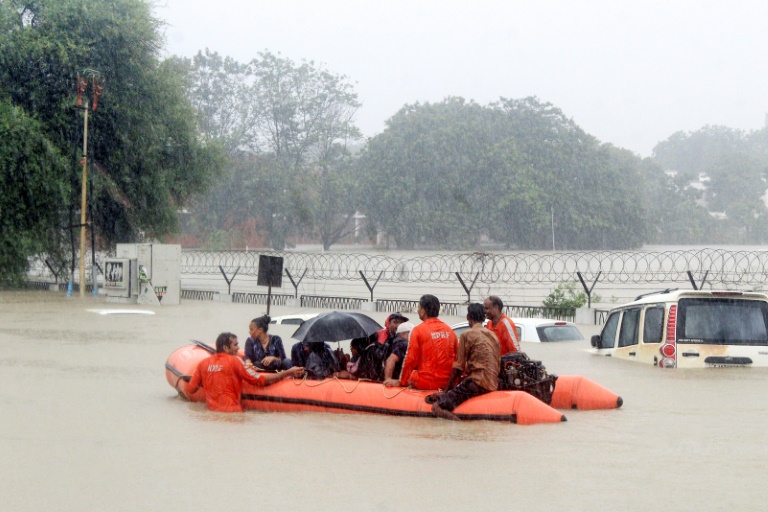 Crocodiles have been spotted hunting in the flooded streets of Vadodara. (Photo: AFP)

Crocodiles hunted dogs in the flooded streets of the Indian city of Vadodara after it was battered by nearly 50 centimetres (20 inches) of rain in 24 hours leaving five people dead, police said Friday.

Waist-high water remained Friday in the Gujarat state city where the main railway station and most roads were closed by the freak deluge.

About 5,000 people were evacuated from their homes as water from the overflowing crocodile-infested Vishwamitri River spread through the city of 1.2 million people.

A video of one crocodile emerging from the flood to attack a dog went viral on social media. The reptile was caught by animal rights activists.

Police said other two other incidents involving crocodiles in populated areas were reported.

Many bridges over the river were closed, cutting off whole districts of the city.

Officials said two people were electrocuted and two labourers died when a wall weakened by the floods fell on them. The body of a 60-year-old man was found floating in the water but the cause of death was not immediately known.

Medical teams from other cities in the western state were to be sent to Vadodara to launch operations to contain infections and disease, officials said.

Power engineers were struggling in the floods to reconnect electricity supplies. Long queues of people formed outside food shops.

More than 250 people have died in monsoon floods across India in the past few weeks, with Assam and Bihar states in the north the worst hit.