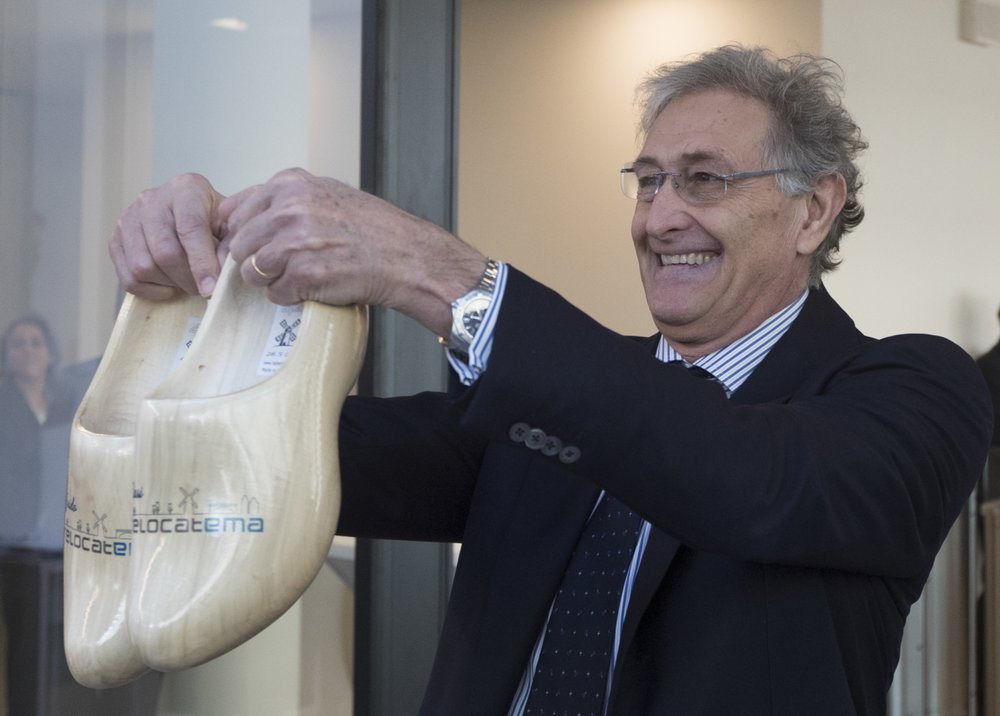 In a sign of the looming Brexit, Italy's Guido Rasi, director of the European Medicines Agency holds a pair of wooden shoes he was presented by Dutch Health Minster Bruno Bruins during the official opening of the agency's temporary headquarters in Amsterdam, Netherlands, Wednesday, Jan. 9, 2019. (Photo: AP)

A gift of traditional Dutch wooden shoes kicked off the European Union Medicines Agency’s formal move from London to Amsterdam on Wednesday, a concrete consequence of Britain’s looming departure from the bloc.

The process of uprooting hundreds of workers and transferring their lives across the North Sea appears, so far at least, to be going more smoothly than the Brexit divorce between Britain and the EU itself, although the medicines agency still expects to lose about a quarter of its 900 employees.

As the agency’s Executive Director Guido Rasi was given the wooden shoes at a welcome ceremony in Amsterdam, British Prime Minister Theresa May was urging lawmakers in London to approve her plan to decouple Britain from the EU on March 29.

A vote on Brexit is due in the British parliament next week, with most signs pointing to defeat for May’s plan and the possibility that Britain may leave the EU without an agreement in place to manage its unprecedented departure.

Deal or no deal, the EMA is heading to Amsterdam.

A purpose-built new headquarters for the agency is under construction in a business district on the southern edge of Amsterdam. In the meantime, the agency that evaluates, authorizes and monitors human and animal medicines for the EU is temporarily moving into an office block near one of Amsterdam’s main railway stations.

“Logistics is moving smoothly, everything that has been planned seems to work,” Rasi said. “Of course it’s a big challenge, it’s a big change. We have to focus and reprioritize on the core business, but so far it’s going as planned.”

The organization said last year it was scaling back some of its activities as the move approached. So far only a small group of workers have started preparing the new office for the move. Rasi and most of his staff still need to find housing and transfer their lives across the North Sea.

With Britain leaving the EU, the agency’s roughly 60 British staff are technically no longer eligible to work at the agency, but Rasi said exceptions can be made and he expects about half of them to make the move.

The other London-based EU agency, the European Banking Agency, is expected to move its 160 staff to an office block in Paris in April.

The Netherlands, which only won the right to host the EMA in a drawing of lots after a deadlocked vote, quickly rolled out the red carpet — setting up a special help desk at the agency’s current headquarters in London within days of the decision.

Dutch experts helped workers with issues including housing options, putting their children in school, finding a doctor and learning Dutch.

One of the trailblazers is Sophie Labbe, a 38-year-old French press officer who has already moved into a new home in Amsterdam with her husband and two young children.

Her 4-year-old daughter is already enrolled in a French international school. Her 2-year-old son is too young for school and her husband is looking for work as a graphic designer.

“We are very happy here,” Labbe said. “I still have to get used to cycling, which is OK ... and we are in the process of trying to learn the language, of course!”