Crowds gather for largest US gun control protest in a generation 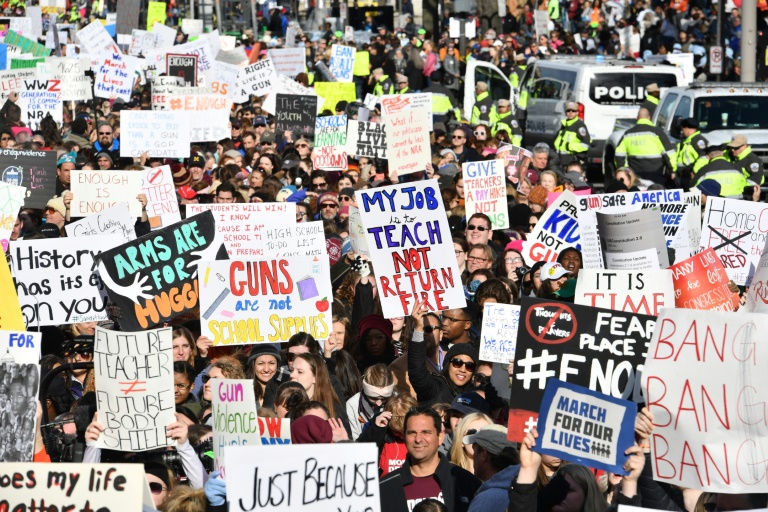 People arrive for the March For Our Lives rally against gun violence in Washington, DC(Photo: AFP)

Bundled against the cold but fired up with passion after a Florida high school massacre, crowds gathered in Washington on Saturday for what is expected to be the biggest US gun control protest in a generation, with hundreds of thousands attending.

The student-organized protest is to feature rallies from coast to coast, with the main event in Washington within sight of the US Capitol -- whose lawmakers the protesters hope to influence.

"Let our votes be our best weaponry," said one of the many signs carried by early protesters, who arrived more than three hours before the event's official mid-day start.

Thousands of demonstrators poured out of the city's subway and had already filled Constitution Avenue and Pennsylvania Avenue, which links the White House with the Capitol, making it difficult to get close to the main stage.

The area was closed to traffic in order to hold the half-million protesters squeezing into streets flanked by giant video screens proclaiming their slogan, "March for Our Lives."

Lauren Tilley, 17, told AFP she arrived from the other side of the country in El Dorado County, California, with seven other teens and three adults.

"We came here through an essay contest. They raised the money in order for us to fly here for the march," Tilley said, holding a sign calling for the US Constitution's Second Amendment, the right to bear arms, to itself be amended.

"We are the people who are scared to go to school every day because we don't know if we are next," she said.

"Our main message is we are not going to be quiet, we will keep fighting. I don't care how much money you have, your money can't drown out the sounds of our voices. We will be voting in 2020. Our generation wants change."

Other marchers carried homemade signs reading: "My dress code is stricter than our gun laws," "Your right to bear arms doesn't override my right to stay alive," and "Your silence leads to violence."

A large peace sign decorated with flowers called for a ban on assault rifles, such as the type used in the Florida shooting.

"The Second Amendment doesn't guarantee, I don't believe, the right to own an assault rifle," said Billy McLaughlin, 67, a teacher from West Virginia.

He and other demonstrators repeated a common complaint of gun control advocates, that politicians are beholden to the powerful National Rifle Association lobby group.

"We shouldn't have guns in our society. These kids are right," said Jeff Turchin, 68, of New York. "They're basically saying the NRA is paying off these Republicans," the party of President Donald Trump, which controls the Senate and House of Representatives.

Students from Marjory Stoneman Douglas High School in Parkland, Florida -- where 17 students and staff were shot dead on February 14 by a 19-year-old former classmate -- have been the driving force behind the march. 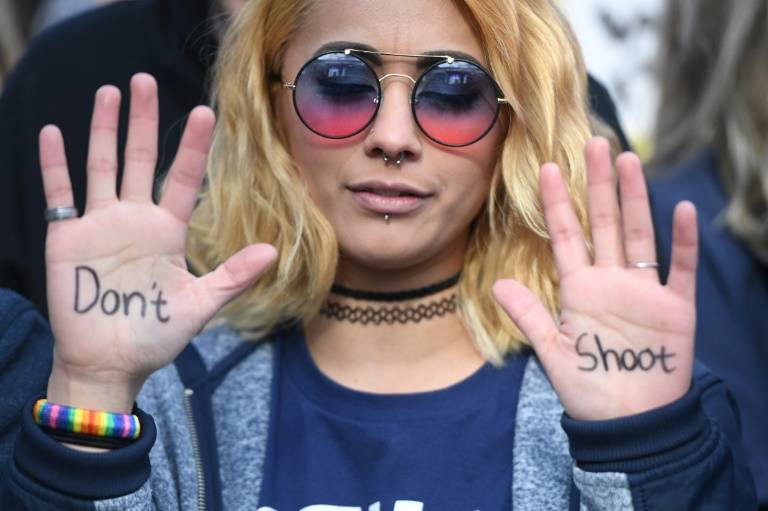 A protester arrives for the March For Our Lives rally against gun violence in Washington (Photo: AFP)

With a mixture of outrage and passion, they have been badgering US lawmakers to enact a ban on assault rifles and to expand background checks to cover all gun purchases, even private sales.

Since the Parkland shooting, the state of Florida and the US Congress have made only modest tweaks to gun laws and Trump's proposal to arm teachers has been met with widespread resistance.

Organizers say more than 800 marches are being held across the country and around the world under the slogan #NeverAgain.

In London, hundreds of people protested outside the US embassy.

Although the Florida mass shooting triggered the movement, it has embraced the entire problem of gun violence in a nation that sees more than 30,000 gun-related deaths a year.

Most of those fatalities do not come from mass shootings but from neighborhood homicides and suicides.

The appeals for stricter gun regulations have drawn the backing of Democratic lawmakers. A series of American celebrities have pledged $500,000 donations to support the protests.

They include actor George Clooney and his wife, Amal, a human rights lawyer; actress and media mogul Oprah Winfrey and director Steven Spielberg and his actress wife, Kate Capshaw.

Democratic Senator Chris Murphy of Connecticut, where 20 elementary school children were shot dead in 2012, told AFP the student-led movement needs to become an "electoral force, and this march may be the beginning of that."

Conscious of their growing political power, March For Our Lives organizers provided a link on their website for supporters to register to vote.

They have called on supporters to vote against lawmakers who receive money from the NRA. 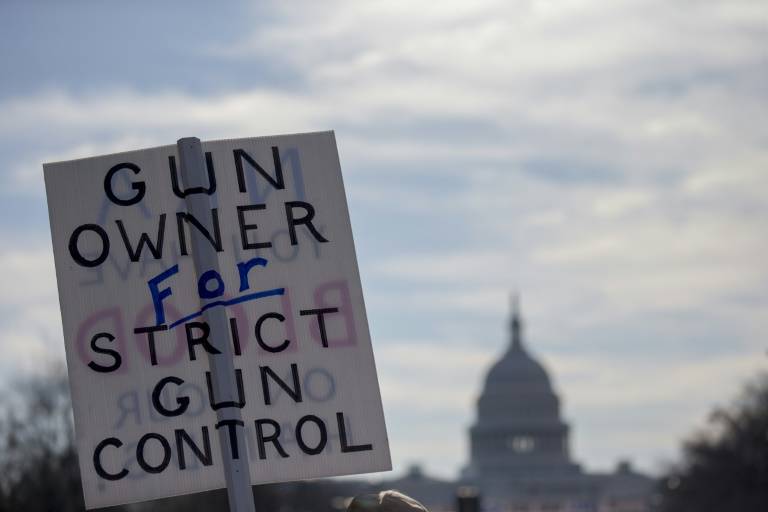 Hundreds of thousands of demonstrators are attending the March for Our Lives rally for gun control, taking place near the US Capitol (Photo: AFP)

Lyft, the ride-hailing service, said it would offer free rides to 50 marches around the United States. Several restaurants in Washington said they would hand out free lunches to high school students, and local residents opened their homes to provide accommodation for the visiting young people.

According to a Quinnipiac University poll, 63 percent of American voters approve of the march in support of tougher gun laws but are not optimistic it will lead to new legislation.