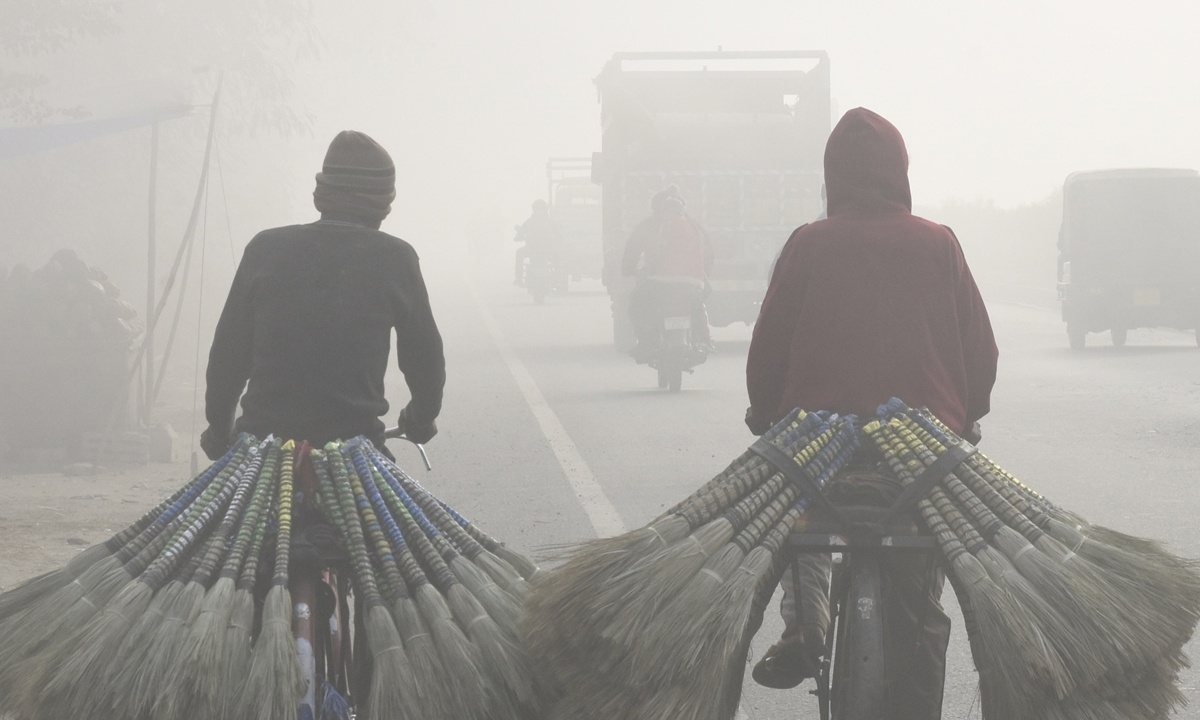 Vendors selling handmade brooms cycle through dense fog on a cold winter morning on the outskirts of Amritsar, India on Wednesday. Cold conditions have recently intensified in parts of north India and dense fog engulfed many states. (Photo: AFP)

The fact that an advanced high-speed railway equipment supplier from China is not taking part in a high-speed railway project in India, which has taken a hostile approach toward Chinese investors after a deadly border clash in the Himalayas in June, could be a blessing in disguise due to the country's poor investment environment, Chinese analysts said on Friday.

Amid India's increasingly hostile approach toward Chinese investors and its new investment law that implicitly discriminates against Chinese investors, CRRC-Pioneer Electric India, a joint venture between CRRC Yongji Electric Ltd and India's Pioneer Fil-Med Ltd, dropped out of a bid for a train set project for the country's Vande Bharat by Indian Railways.

Only two valid bids from two Indian domestic companies were left, according to Indian media reports on Thursday.

The news of the train set bid came as hundreds of Indian workers smashed and looted a Wistron Corp plant, a supplier of Apple Inc, causing reported damage worth $7.1 million in total and dashing the country's image as a viable substitute to take part in the industrial chain with some companies planning to set up their plants outside of China.

Chinese analysts said that the current investment environment in India is very negative indeed for Chinese investors, but an Indian media outlet's reports of a Chinese company being "disqualified" from the bid seems to suggest that the Indian market is an attractive one that many foreign companies want to grab a share in, which is a far cry from reality.

India's reputation in the high-speed railway market has been bankrupted. The country is actually having a crisis in finding a partner for its high-speed railway ambitions, as it cannot do it itself, said Zhao Gancheng, director of the Center for Asia-Pacific Studies at the Shanghai Institute for International Studies.

Zhao said since Japanese companies won the bid to build the Mumbai-Ahmedabad high-speed rail link - the country's first high-speed railway - progress has been far from ideal.

"Having agreed to India's harsh terms for the sake of gaining entry into the Indian market, Japanese bidders have run into a number of issues from land acquisition to securing loans in building the railway," Zhao said. "Now the announced 2023 completion date is in serious doubt and potential bidders from France and Japan are all looking at how the drama will unfold."

It is reported that the completion date of the railway has already been delayed by five years.

"In this context, the fact that a Chinese company is not part of this mess is a relief, not a regret," Zhao told the Global Times on Friday.

CRRC, China's state-owned bullet train manafacturermanufacturer that supplies trains to the world's largest high-speed railway network, did not comment when reached by the Global Times.

Sun Zhang, a railway expert and professor at Shanghai Tongji University, told the Global Times that under the disguise of nationalism, India has a deeper motive in its political maneuvering of what should be a business deal.

It plans to use Japanese technology as part of its "pact of brotherhood" with Japan to contain China's rising influence in the region, Sun noted.

The result is that India will pay about 30 percent more money for roughly the same product.

"And, seen from a longer-term perspective, India will lose a precious opportunity and the convenience of connectivity when India's high-speed railway network fails to connect with the China-led Pan-Asia railway network in the mid-term future," Sun told the Global Times on Friday, noting the different standards used by Chinese and Japanese companies.