Cruise stranded by virus fears ends with roses in Cambodia 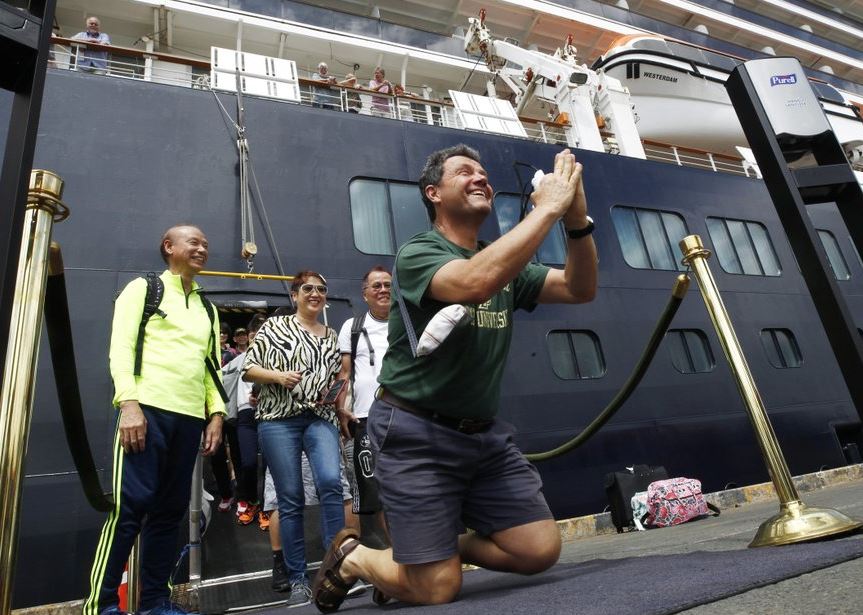 Passengers react after they disembarked from the MS Westerdam, back, at the port of Sihanoukville, Cambodia, Friday, Feb. 14, 2020. (Photo: AP)

After being stranded at sea for two weeks because five ports refused to allow their cruise ship to dock, the passengers of the MS Westerdam were anything but sure their ordeal was finally over.

Then the leader of Cambodia, Prime Minister Hun Sen, agreed to let the Westerdam dock. Thailand, Japan, Taiwan, the Philippines and Guam had earlier turned the ship way because they feared its passengers and crew could spread the deadly new virus from China, but Hun Sen declared he would welcome them.

The first batch of hundreds of passengers who disembarked Friday saw the Cambodian leader arrive by helicopter and then personally hand them flowers as they made their way to land.

“Today, although Cambodia is a poor country, Cambodia has always joined the international community to solve the problems that the world and our region are facing,” Hun Sen said as the first passengers disembarked.

The grateful passengers sang his praises.

“How wonderful it is to be here. Thank you very much to the prime minister. He has a wonderful heart,” said Anna Marie Melon, from Queensland, Australia. “I’m very excited (to be here),” she said as she waved a rose Hun Sen had handed to her.

The passengers cheered as they walked toward waiting buses and waved goodbye to other passengers watching from the ship’s deck.

“Cambodia alone, even the United States, Guam, did not let us land, but Cambodia did, so that’s wonderful. Absolutely wonderful,” Joe Spaziani, from Florida, told reporters. “We appreciate it very very much. It’s been a long struggle and we appreciate everyone being here.”

He and many other passengers wore a krama, a traditional Cambodian scarf, around their necks.

John Stanley, of Evesham in England, who with his wife Olive had been on the ship since it departed from Singapore in January on the first leg of its journey, recounted some of the stresses of the last two weeks.

After some uncertainty, they came to accept the ship’s doctor’s declaration that none of the passengers had the feared COVID-19 viral illness.

But there was concern that some people’s supplies of necessary medication would run out and there were many text messages from worried family members back home..

“So it was a question of being really, really thankful to the Cambodian government and really, really relieved that we can go home,” Stanley said. “To be honest, until we’d actually gone off the ship, we didn’t really believe it because we had one or two situations before where we thought we were getting off.”

The Westerdam’s operator, Holland America Line, had said no cases of the virus had been confirmed among its 1,455 passengers and 802 crew members. Some 20 passengers reported stomachaches or fever, but tests for the virus done at the Pasteur Institute in Phnom Penh showed none had the illness.

Hun Sen said he acted for humanitarian reasons and that he wanted passengers to be able to return to their home countries.

“If Cambodia did not allow this ship to dock here, where should this ship go?” he said. “I want to inform Cambodians and the world that I coming here even for a short time means this is no time for discrimination and to be scared, but a time for everyone to be in solidarity to solve the problems we are facing now.”