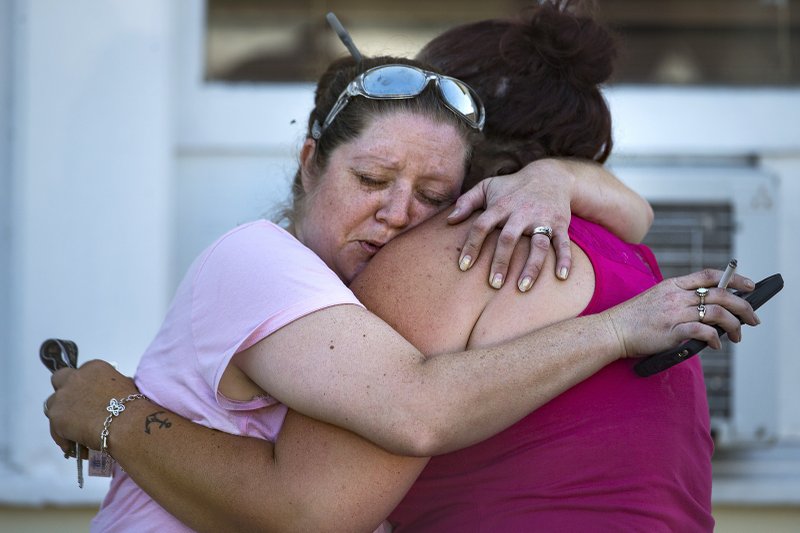 Carrie Matula embraces a woman after a fatal shooting at the First Baptist Church in Sutherland Springs, Texas, on Sunday, Nov. 5, 2017. Matula said she heard the shooting from the gas station where she works a block away. (Nick Wagner/Austin American-Statesman via AP)

U.S. Sen. Ted Cruz says that the “bravery and courage” of a citizen who shot back at the gunman in the Texas church attack should be celebrated.

The Republican senator from Texas spoke after talking to law enforcement officials and visiting the church in Sutherland Springs where Devin Kelley killed 26 people and wounded about 20 more.

When a reporter asked Cruz about gun control, he noted the recent terrorist attack with a truck in New York and said “Evil is evil.”

He then lauded the “ordinary citizen” who engaged the gunman. Cruz says that law enforcement officers showed him where the citizen hid behind a car and took incoming shots from the gunman.

Cruz said he asked law enforcement what would have happened if the citizen had not used his own gun to confront Kelley. Cruz said they responded that the death toll would have been higher.

The gunman in a mass shooting at a Texas church had been arrested for animal cruelty in Colorado in 2014.

One neighbor told a deputy that Kelley chased the young Husky, jumped on top of it and struck the dog with a closed fist several times. Another neighbor says Kelley grabbed the dog, threw it into the air, then onto the ground and dragged it to his camper.

Kelley initially refused to leave the camper to speak with officers in the Aug. 1, 2014 incident. He denied abusing the dog.

Officers arrested Kelley for misdemeanor animal cruelty and took the Husky to a veterinary center.

Kelley was given a deferred probationary sentence and was ordered to pay $368 in restitution. He complied with the sentence.