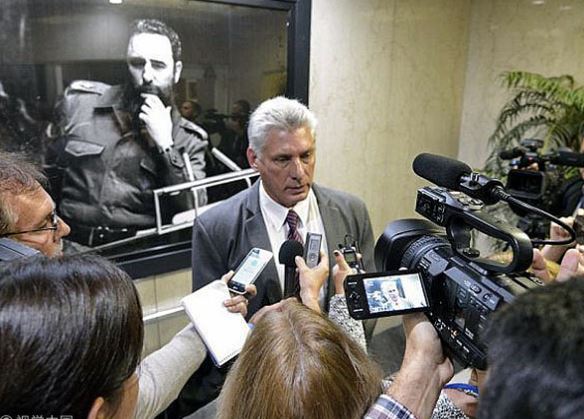 Cuban President Miguel Diaz Canel (C) talks to reporters upon his arrival at the mission of Cuba in New York, September 23, 2018. (Photo: VCG)

Cuba on Friday renewed its call on the US to end the decades-long economic and trade blockade held against the nation since 1962, claiming it caused a loss of over $933 billion.

The appeal was made by the Commission of International Relations of the National Assembly of People's Power at a public hearing on Friday.

The commission said such a blockade is unjust and brutal and urged the US to lift the ban.

The economic and financial blockade and trade embargo is a violation of Cuban people's human rights and is the prime obstacle of Cuba's economic growth, the commission told representatives.

Such a ban also violates international law and the Charter of the United Nations, the commission said.

At the annual United Nations gathering last week, Cuban President Miguel Diaz Canel made an appeal to end the commercial and financial embargo, saying the embargo has "already failed and will continue to fail."

Over the past 26 years, Cuba has presented a yearly resolution at the UN General Assembly against the US economic blockade, which has been supported by most member countries.

In 2016, the US, for the first time in over two decades, didn't vote against the resolution. Instead, it, along with Israel, abstained. The resolution won 191 votes in favor.

But in 2017, the US and Israel were the only two countries that voted against the resolution.

US Ambassador to the United Nations Nikki Haley has scorned the vote as "political theater". She told the UN before the 2017 vote that it has no power to end the Cuba embargo. The blockade is based on US law, which only the US Congress can change, she said.

This year, Cuba will submit a draft resolution on October 31 for the twenty-seventh time.