Delegations from Cuba and the European Union (EU) met on Friday in Havana for the Second Dialogue on Unilateral Coercive Measures. 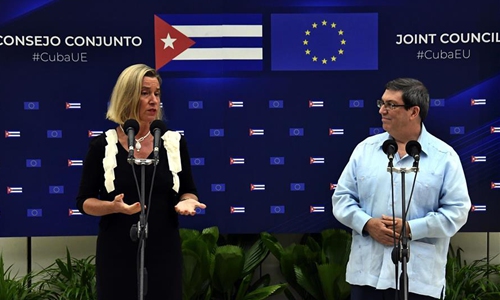 During the closed-door meeting, which examined the use of coercive measures as a means of putting political and economic pressure on member states, the Cuban delegation denounced the US blockade against the island that has existed for more than half a century.

"It is an issue of the greatest importance for Cuba, because over the last period, there has been a significant resurgence of the blockade and of similar hostile measures against our country," said Rodolfo Reyes, general director of multilateral affairs and international law at Cuba's Foreign Ministry.

The diplomat called attention to the recent decision by the administration of US President Donald Trump to put into effect Title III of the Helms-Burton Act, which allows US lawsuits against foreign companies operating in Cuba with assets nationalized or expropriated following the 1959 Revolution.

The lawsuits could threaten many European companies, especially Spanish tourism chains like Iberostar, Melia and NH, which have investments in Cuba. EU businesses operating in the country could face difficulties ranging from opening bank accounts to importing materials from abroad.

Katja Afheldt, head of Division for Mexico, Central America and the Caribbean at the European External Action Service, said that countries that want to do legitimate business with Cuba are now facing a significant legal risk.

"This affects economic relations between the EU and Cuba, and for this reason, member countries voted unanimously in favor of Cuba's resolution against the blockade at the United Nations," the diplomat added.