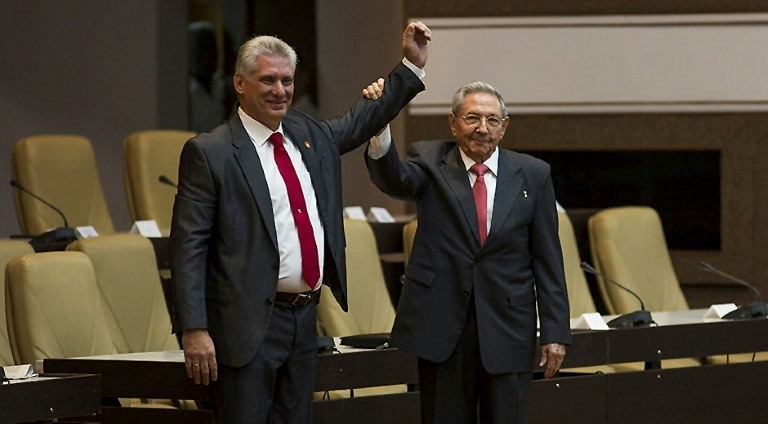 Outgoing Cuban president Raul Castro (R) raises the arm of his successor Miguel Diaz-Canel after he was formally named as the country's new leader on Thursday.(Photo: AFP)

Cuba marked the end of an era Thursday as Miguel Diaz-Canel was formally elected as the country's new president, becoming the first leader of the Caribbean island in six decades who is not named Castro.

The silver-haired Diaz-Canel -- a top Communist Party figure who has served as first vice president since 2013 -- assumes power from Raul Castro, who himself took over from his elder brother Fidel , father of the 1959 revolution.

In his first speech as president, Diaz-Canel vowed to keep the country on the path of that "revolution," but also on the road to economic reform.

"The mandate given by the people to this legislature is to continue the Cuban revolution at this crucial historic moment, which will be marked by what we must do to implement the economic model" put in place by Raul Castro, he said.

"I am here to work, not to make promises," he said.

Diaz-Canel was elected in a landmark vote of the National Assembly which took place on Wednesday -- he was the sole candidate for the presidency -- with the result formally announced on Thursday.

He is the island's first leader born after the revolution, and will be 58 on Friday.

The chamber erupted into applause as the result was read out, with many of the delegates smiling, and shaking hands warmly with Castro and Diaz-Canel.

As Diaz-Canel walked to the front of the chamber, he high-fived the front row of delegates and embraced Castro as he took the stage, images broadcast on state television showed.

Then the 86-year-old Castro raised his successor's left arm in the air in victory, prompting another wave of applause from the delegates -- some of whom were in civilian attire, while others wore military fatigues.

It was a historic, though understated, handover.