The two top Democrats in New York's legislature withdrew their support for Gov. Andrew Cuomo on Sunday amid mounting allegations of sexual harassment and undercounting COVID-19 deaths in nursing homes. 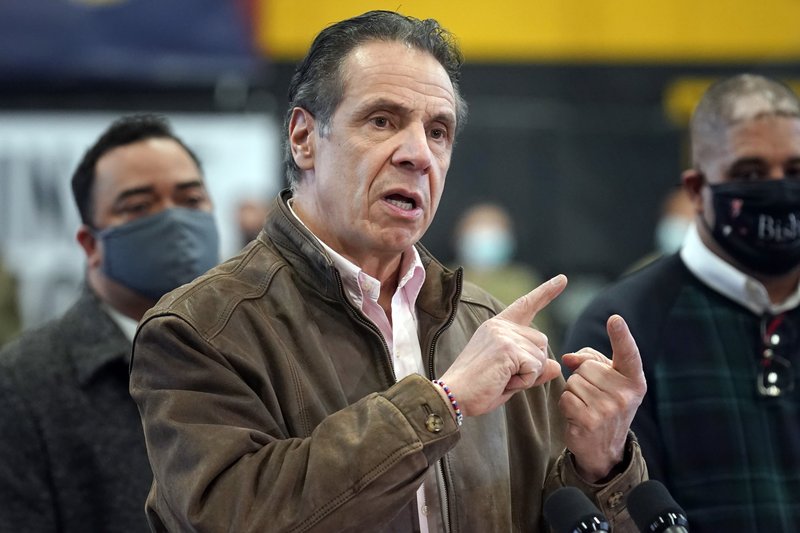 In this Feb. 22, 2021 file photo, New York Gov. Andrew Cuomo speaks during a news conference at a COVID-19 vaccination site in the Brooklyn borough of New York. (Photo: AP)

Senate Majority Leader Andrea Stewart-Cousins became the first senior Democrat in the state to say the three-term governor should resign. Assembly Speaker Carl Heastie stopped short of demanding that Cuomo quit, but said in a statement that "it is time for the Governor to seriously consider whether he can effectively meet the needs of the people of New York."

On Saturday, two more women who worked for Cuomo publicly accused him of inappropriate behavior, on the heels of other allegations in recent weeks.

"Every day there is another account that is drawing away from the business of government," Stewart-Cousins said in a statement. "New York is still in the midst of this pandemic and is still facing the societal, health and economic impacts of it. We need to govern without daily distraction. For the good of the state Governor Cuomo must resign."

Her public push for his resignation came shortly after a Sunday press conference where Cuomo said it would be "anti-democratic" for him to step down.

"There is no way I resign," Cuomo told reporters.

"They don't override the people's will, they don't get to override elections," he said. "I was elected by the people of New York state. I wasn't elected by politicians."

In a brief phone conversation Sunday prior to the press conference, Cuomo told Stewart-Cousins he wouldn't quit and they would have to impeach him if they wanted him out of office, according to a person who was briefed by someone on the call. The person spoke to The Associated Press on condition of anonymity because the call was intended to be private.

Cuomo said the next six months will determine how successfully New York emerges from the coronavirus pandemic. "I'm not going to be distracted because there is too much to do for the people," he said, noting that the state must pass a budget within three weeks and administer 15 million more COVID-19 vaccines.

Support for Cuomo has eroded with surprising speed as he's faced twin scandals, one over his treatment of women in the workplace, and a second over his administration's months-long refusal to release complete statistics on COVID-19 deaths in nursing homes.

Some lawmakers have been infuriated by revelations that Cuomo's administration delayed releasing some data about deaths of nursing home patients in hospitals, at least partly because of concerns it could be used against them by President Donald Trump's administration.

Several women have publicly told of feeling sexually harassed, or at least made to feel demeaned and uncomfortable. The state's attorney general is investigating. Cuomo has urged people to wait for that investigation to conclude before they judge him.

Others who have called for Cuomo's resignation include U.S. Rep. Kathleen Rice, a Long Island Democrat.

Former adviser Lindsey Boylan, 36, said Cuomo made inappropriate comments on her appearance, joked about playing strip poker and once kissed her on the lips at the end of a meeting. Former aide, 25-year-old Charlotte Bennett, said Cuomo asked if she ever had sex with older men and made other comments she interpreted as gauging her interest in an affair.

Another former aide, Ana Liss, told The Wall Street Journal in a story published Saturday that when she worked as a policy aide to the governor between 2013 and 2015, Cuomo called her "sweetheart," kissed her hand and asked personal questions including whether she had a boyfriend.

Asked about Liss' story at his news conference Sunday, Cuomo said such talk was "my way of doing friendly banter."

Echoing comments he made in a news conference last week, Cuomo acknowledged he'd made jokes and asked personal questions in an attempt to be collegial and frequently greeted people with hugs and kisses.

"I never meant to make anyone feel any uncomfortable," he said. Cuomo has denied touching anyone inappropriately.

While Cuomo has been apologetic in recent days over his behavior, at least tacitly acknowledging that some of the things women have said are true, he's also singled out a few accusations as flatly false.

On Sunday he disputed a story told by about him by Karen Hinton, a former press aide to Cuomo when he served as the federal housing secretary under President Bill Clinton.

In a story published Saturday in The Washington Post, Hinton detailed an uncomfortable hotel room interaction she had with Cuomo when the two met in California years ago as they were trying to patch things up after an estrangement.

Hinton said that as she got up to leave, Cuomo gave her a hug that was "very long, too long, too tight, too intimate."

She described the encounter not as sexual harassment but as a "power play" for "manipulation and control." She was no longer an aide to Cuomo at the time.

Asked Sunday about Hinton's account Cuomo said it was "not true" and noted that the two had been longtime political adversaries.