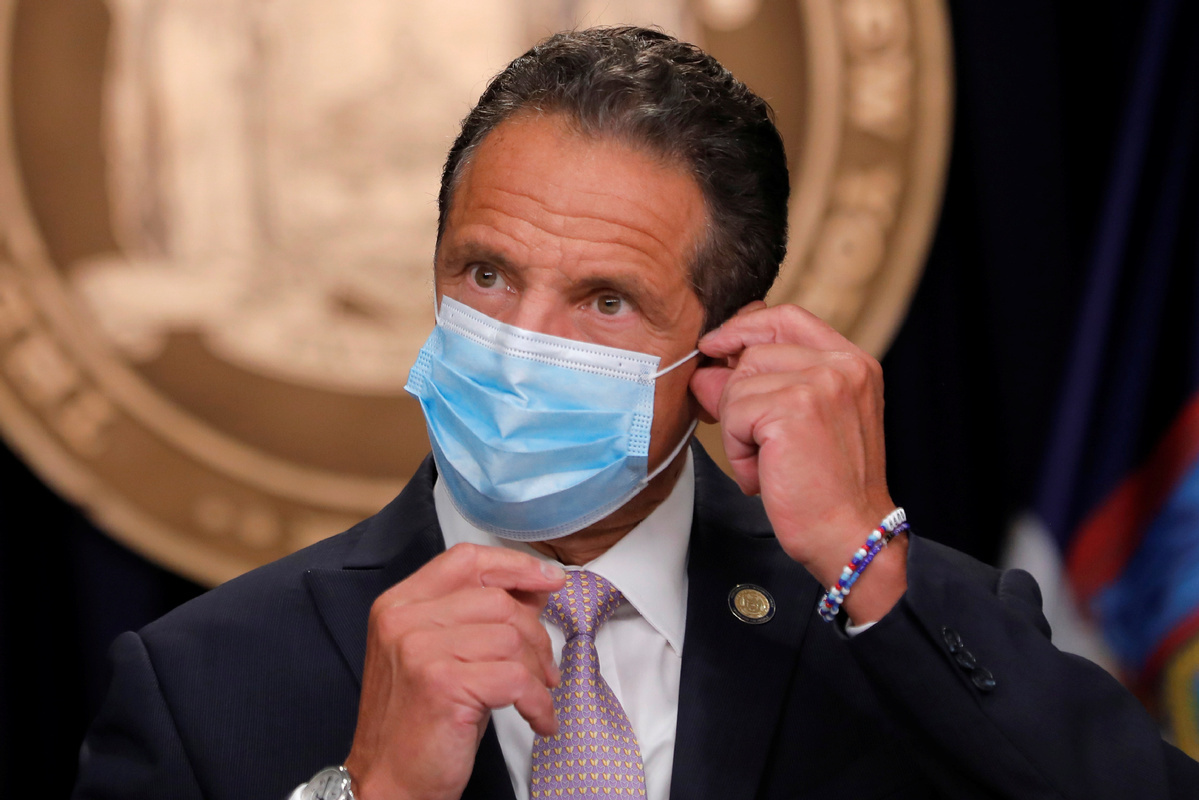 New York Governor Andrew Cuomo wears a protective face mask as he arrives to speak during a daily briefing following the outbreak of the coronavirus disease (COVID-19) in Manhattan in New York City, New York, on July 13, 2020. (Photo: Agencies)

New York Governor Andrew Cuomo and members of his state's COVID-19 task force flew to Savannah, Georgia, on Monday to — as Cuomo put it — begin to "repay" other states for their help when New York needed it most earlier this year.

The New York delegation set up two testing sites for the novel coronavirus in low-income minority communities in Savannah, which has a population of about 145,000.

The sites, located at two churches, will provide up to 500 tests per day.

Cuomo said his team was also delivering medical supplies and "thousands" of pieces of personal protective equipment (PPE) and would share its expertise in contact tracing.

Many viewed the visit as an implicit rebuke of Georgia's Republican leadership as infections and hospitalizations continued to rise in Georgia.

As of Tuesday, Georgia had 145,582 cases of coronavirus and had suffered 3,177 deaths, according to data collected by Johns Hopkins University.

Georgia has seen 20,851 new cases in the last seven days, according to New York Times data, ranking it fifth in the country, just after Florida, Texas, California and Arizona. In terms of the total number of infections, it currently ranks eighth in the US, according to the Times.

The number of new hospitalizations in Georgia due to respiratory illness reached nearly 3,200 on Monday, according to The Associated Press, a level that has tripled in the last month.

Chatham County, where Savannah is located, has a population of just under 300,000, but has a current total of 3,600 infections and has experienced 41 deaths, according to the website of the Georgia Department of Public Health.

"When we were at our worst point with this virus in New York we have volunteers from all across the country come to help fight this dreaded disease, and now that we are past our apex we are ready to help any city or state with whatever they need," Cuomo said before departing.

Cuomo said he hopes to also help Atlanta, Houston and Florida at some point.

Cuomo declined to directly criticize Georgia Governor Brian Kemp, but he praised Savannah Mayor Van Johnson, a fellow Democrat and New York City native, who has been a severe critic of Kemp in recent days.

"If you want to win, you follow a winner," Johnson said. "And New York went from worst to first."

Johnson signed a July 1 order requiring the wearing of masks in public in Savannah. New York was the first state to make masks mandatory.

"We did it April 15," said Cuomo, as quoted by the Savannah Morning News. "I think it's one of the smartest things that I did. It is proven by the data that masks work."

More than 15 other Georgia cities and counties soon followed Johnson's lead, including the city of Atlanta on July 10, prompting Kemp to tweet that the mask order by Atlanta Mayor Keisha Lance Bottoms was "non-binding and legally unenforceable".

Kemp asked a judge to stop Bottoms and other local officials from contradicting his executive orders regarding COVID-19.

On Tuesday, Kemp issued a recommendation that residents "commit to wearing a mask", even as he sues Atlanta officials for mandating them. Lawyers for Georgia's attorney general are scheduled to argue that case in court starting Tuesday.

A spokesperson for Kemp declined to comment on Cuomo's visit.

"Our federal government is still in denial about this virus, and five months later this country is still totally unprepared to deal with this," said Cuomo. "I've been talking to other states and mayors and governors and they still don't have testing, tracing programs or PPE.

"We're going to meet with Mayor Van Johnson and his team today … we'll tell them about what we did, we will help them with testing and tracing programs, we're going to bring thousands of pieces of PPE and whatever they need from us they're going to get."

But Cuomo's ostensibly humanitarian mission was not without its critics.

"Cuomo is acting like a conquering hero," said Rensselaer County Executive Steve McLaughlin, a Republican opponent of the governor, to the New York Post. "New York leads the nation (in) cases and deaths. He refused to act early and failed to contain the coronavirus."

"How can you have a political difference on a virus?" asked Cuomo, speaking to Savannah's WSAV, a local NBC affiliate.

When asked by WSAV if it is difficult to enforce a mask mandate, Cuomo said it is just like enforcing nonsmoking areas or open container laws. He said it is not difficult because the best enforcement comes from the people.

The governor added that he believes that if a person dies from being exposed by someone not wearing a mask, they die due to arrogance.

Meanwhile, back in his home state, New York City entered phase 4 of its reopening process Monday, which allowed sports events (without spectators) and media production to resume — as well as opening zoos and public gardens — but excludes openings by malls, gyms, movie theaters or indoor dining.