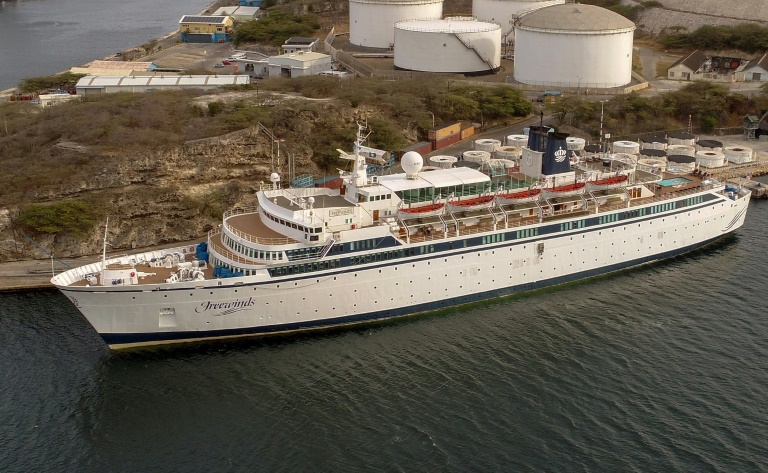 The Freewinds was placed under quarantine in Willemstad upon its arrival from St Lucia. (Photo: AFP)

The Dutch territory of Curacao said Saturday it would do what was needed to prevent measles spreading from a Scientology cruise ship, after a crew member came down with the disease.

The Freewinds, which left the Caribbean island of St. Lucia on Friday, arrived back in its home port of Curacao Saturday.

There were about 300 people aboard the ship, according to Saint Lucia authorities.

The Curacao government said it would "take all necessary precautions to handle the case of measles on board of the Freewinds," including vaccinations.

"An investigation will also be done to determine who will be allowed to leave the ship without (posing) a threat to the population of Curacao," it said in a statement.

The vessel is moored in an area not accessible to the public.

Anyone who could prove they had been vaccinated or who had contracted measles in the past would be allowed to leave the ship while the others would have to stay on board, the reporter told NOS.

"It is imperative to make all efforts to prevent a spread of this disease internationally," the Curacao government said.

It said the risk of the disease spreading was relatively low as many people had been already been vaccinated in the past but advised parents to make sure their children were vaccinated.

The Church of Scientology says the 440-foot (134-meter) vessel is used for religious retreats and is normally based in Curacao.

The vessel had arrived in St. Lucia from Curacao on Tuesday, when it was placed under quarantine by health authorities because of a measles patient, said to be a female crew member.

The resurgence of the once-eradicated, highly contagious disease is linked to the growing anti-vaccine movement in richer nations, which the World Health Organization (WHO) has identified as a major global health threat.

The church, founded by science fiction writer L. Ron Hubbard in 1953, did not respond to requests for comment.

Its teachings do not directly oppose vaccination, but followers consider illness a sign of personal failing and generally avoid medical interventions.

The Curacao government is asking people who may have visited the Freewinds between April 22 and 28 to report to health authorities.