WORLD Curfews and clashes as US race protests spread

Curfews and clashes as US race protests spread 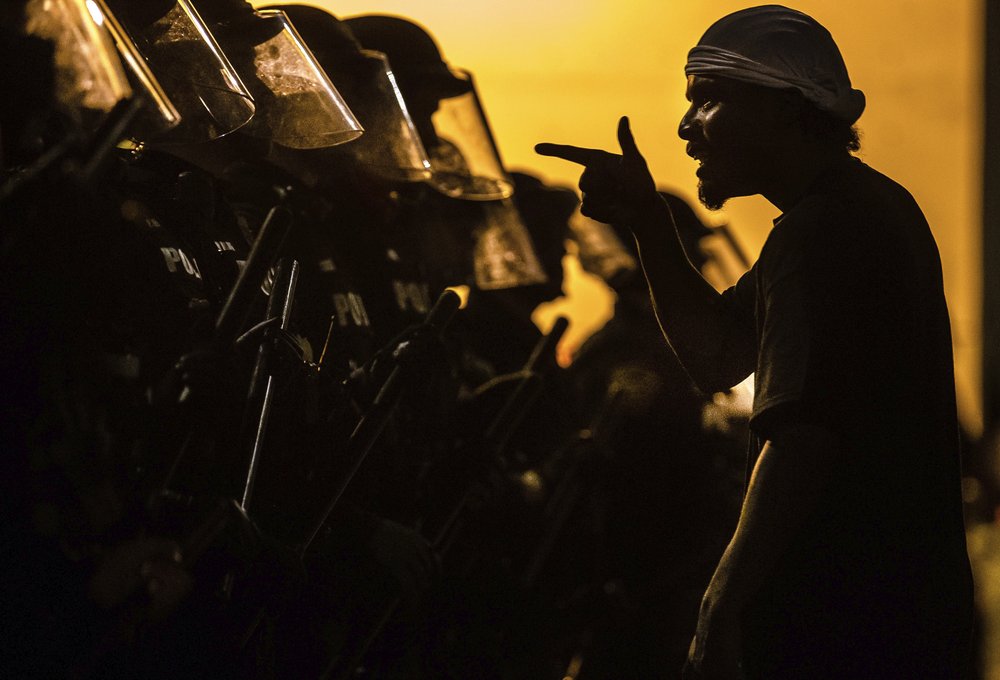 A protester vents at a line of Tucson Police Officers in riot gear at Cushing Street and Church Avenue early on Saturday, May 30, 2020 in Tucson. (Photo: AP)

Clashes broke out and major cities imposed curfews as America began another night of unrest Saturday with angry demonstrators ignoring warnings from President Donald Trump that his government would stop violent protests over police brutality "cold."

Los Angeles, Atlanta and Philadelphia were among several cities to order people to stay indoors after thousands took to streets nationwide to protest the death of an African American man during an arrest in Minneapolis on Monday.

George Floyd, who died after a police officer knelt on his neck for nearly nine minutes, has become a fresh symbol of police brutality against blacks and sparked civil unrest not seen in the United States for years.

In Los Angeles, officers fired rubber bullets and swung batons during a testy standoff with demonstrators who set fire to a police car. Police and protesters also clashed in Chicago and New York, where several arrests were made.

Trump blamed the extreme left for the violence, including widespread looting and arson in Minneapolis, saying rioters were dishonoring the memory of Floyd.

"We cannot and must not allow a small group of criminals and vandals to wreck our cities and lay waste to our communities," the president said.

"My administration will stop mob violence. And we'll stop it cold," he added, accusing the loose-knit militant anti-fascist network Antifa of orchestrating the violence.

Rioters to be 'decimated'

His late afternoon comments came as crowds began marching through streets in Minneapolis, New York, Chicago, Miami, Philadelphia and other cities, chanting slogans such as "Black Lives Matter" and "I can't breathe," which Floyd was heard saying repeatedly before he died.

A peaceful protest took place in Toronto as the demonstrations spread beyond America's border.

LA announced a curfew from 8:00 pm (0300 GMT) until 5:30 am Sunday while Atlanta's was set for 09:00 pm to sunrise. A similar nighttime curfew was implemented in Louisville, Kentucky.

Authorities in Minneapolis braced for a fifth night of protests over what African American leaders called "systemic" mistreatment by law enforcement.

Walz said he was mobilizing the state's entire 13,000-strong National Guard to deal with rioters who have looted shops and set fires in the Minneapolis-St. Paul area.

Thousands who defied the first night of curfew overwhelmed the police and troops who had been deployed.

All major freeways leading into Minneapolis were shut down Saturday night with military helicopters taking to the skies over the area as the state braced for more rioting, arsons and looting.

People congregated peacefully on Minneapolis streets Saturday afternoon, chanting Floyd's name and carrying brooms to help clean up the scores of shops ransacked in the violence of the previous nights.

Some placed flowers in front of the shop where Floyd was arrested on Monday, before his death in the hands of police was recorded in a horrifying cellphone video since seen around the world.

"Our community has stepped up, there are more people cleaning the streets than looting," said Nicole Crust, 41, owner of a beauty salon that was broken into.

Crust echoed officials who said the worst violence was from outsiders, but added a key theme of the protests: "Police brutality must stop."

Walz warned that protestors staying out Saturday past the 8 pm curfew faced "a dangerous situation."

African American and other Minneapolis community leaders pleaded for local residents to stay home Saturday night, as the curfew was expanded to multiple cities in the state.

In New York's Harlem neighborhood, several hundred people gathered for speeches on racism at a midday rally. Later in the afternoon, the crowd grew to thousands and they began marching through the streets.

"We're not turning the cheek anymore. Black lives matter. They will always matter. And we're here today to show that," said makeup artist Melissa Mock, who joined several thousand in a daytime protest in Miami.

Protests were expected to continue throughout the weekend even after the now-fired Minneapolis police officer accused of Floyd's death was arrested and charged with third-degree murder on Friday.

That night, protestors shouted and chanted for hours outside the White House in Washington as Trump sat inside facing the most serious spate of civil unrest of his presidency, in the middle of the coronavirus pandemic.

With a video showing the officer, Derek Chauvin, pressing his knee on Floyd's neck for nearly nine minutes until well after the man went motionless, while three other officers assisted, Floyd's family and many protestors demanded more arrests and tougher murder charges.